“Our Prophet is a red line” .. Continuing condemnations and escalating... 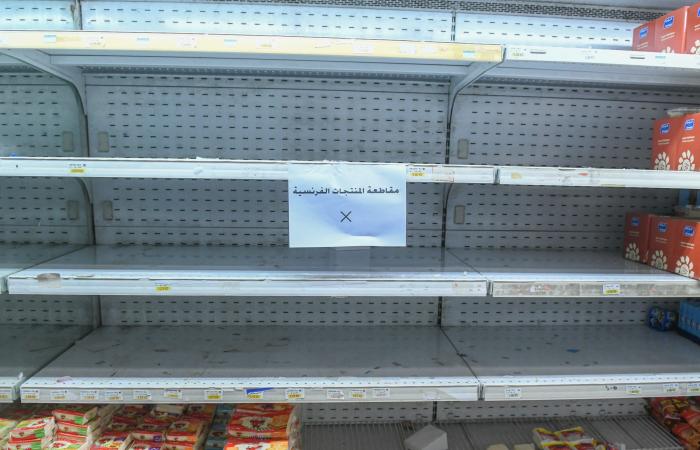 Arab condemnations continued for the statements of French President Emmanuel Macron, which Muslims considered insulting to Islam and the Prophet Muhammad, which coincided with mounting calls to boycott French products and tourism.

And on Wednesday, Macron said, in a press statement, that France will not abandon the cartoons (insulting to Islam and the Prophet Muhammad, may God bless him and grant him peace), which sparked a wave of anger throughout the Islamic world.

The “Boycott of French Products” hashtag came to the fore on Twitter in Morocco. Moroccan activists interacted a lot with this hashtag, on various social media platforms, in response to those pictures, and the statements of French President Emmanuel Macron, “provocative” to Muslims.

A number of activists changed their pictures on “Twitter” and “Facebook” and others, putting the name “Muhammad, the Messenger of God,” and rejecting the statements made by French officials.

In Kuwait, the chairman and members of the board of directors of the “Al-Naeem Cooperative Society” decided to boycott all French products, without offering them or selling them, and removing them completely from all the association’s sites, completely rejecting everything that affects the religion of Islam and the Messenger of God.

The “Dhahir Suburb” association took the same step, saying, “Based on the position of French President Emmanuel Macron and his support for the offensive drawings of our beloved Prophet, may God bless him and grant him peace, we decided to remove all French products from the market and branches until further notice.”

The “Al-Aqeelah” and “Saad Al-Abdullah City” associations also joined the campaign, and posted photos on their electronic platforms showing the removal of products from their exhibitions.

The Egyptian community in Turkey said that Macron’s statements “incite to insult the beloved Al-Mustafa, under the pretext of freedom of expression,” describing it as a “blatant attack and a provocation to the feelings of Muslims.”

In a statement, the community called for a boycott of French goods and tourism.

From Libya, a member of the Presidency Council, Mohamed Zayed, condemned, in a Facebook post, Macron’s statements.

He stressed that “the status of the Prophet Muhammad will not be affected by malevolent statements nor petty fees.”

In Yemen, Minister of Fisheries Fahd Kavin tweeted, saying, “Continuing to publish cartoons that offend the feelings of Muslims, including cartoons insulting to the Holy Prophet, is reckless behavior.”

Yemeni Minister of Endowments, Ahmed Attia, said in a tweet, “Except for the Messenger of God.”

In Palestine, the Ministry of Religious Endowments in the Gaza Strip condemned, in a statement, “the systematic campaign launched by some French newspapers by publishing cartoons insulting to the Prophet Muhammad, may God bless him and grant him peace, without the slightest respect” for the feelings of Muslims.

The ministry called on “Arab and Islamic governments to have a clear stance towards the French government, which allows the publication of these cartoons.”

It also called on “Muslims around the world to boycott French products.”

In turn, Hamas said, “We followed with great anger the official and unofficial statements in France that justify the publication of the offensive cartoons, under the pretext of freedom of expression.”

In a statement, the movement warned that this behavior “may push towards a clash between peoples and states, which are in dire need of the values ​​of tolerance and coexistence, which will negatively affect international peace and security.”

During the past few days, France witnessed the publication of insulting pictures and drawings of the Prophet Muhammad, peace be upon him, on the facades of some buildings in France.

In addition to the offensive cartoons, France has recently witnessed a controversy over the statements of a large section of politicians targeting Islam and Muslims, following the killing of a history teacher on October 16, by a French citizen angered by the latter showing offensive cartoons to his students. For the Prophet Muhammad, on the pretext of freedom of expression.

Many Islamic organizations condemned the killing of the teacher, but stressed that this cannot be separated from the condemnation of his behavior related to displaying “offensive” cartoons of the Prophet.

Is the French economy affected by the Arab boycott campaigns?

Erdogan: Macron needs psychological treatment, and I do not know his problem with Islam

These were the details of the news “Our Prophet is a red line” .. Continuing condemnations and escalating... for this day. We hope that we have succeeded by giving you the full details and information. To follow all our news, you can subscribe to the alerts system or to one of our different systems to provide you with all that is new.