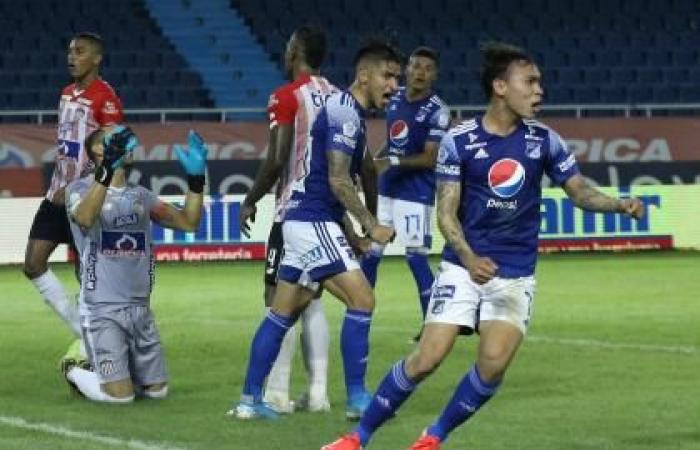 At the end of the Saturday day of Colombian soccer, Junior and Millonarios starred in the match of the date in the 2020 League. Both teams arrived urging a victory to continue in the fight to qualify for the final stages of the contest.

Junior would come out with the need and immediately imposed conditions. Gabriel Fuentes received a deep ball in the third minute and assisted Carmelo Valencia to break the Albiazul defense. Goal of ‘Tutunendo’ that in the end was canceled out of place.

At ten, Millonarios would respond with a powerful free kick by Matías de Los Santos that Sebastian Viera took just enough and minutes later Cristian Arango would try the same route but his shot crashed into the barrier.

At 19 the visit would arrive again with great danger, at sheer speed. Emerson Rodríguez left two rivals on the road to the right and assisted Juan Camilo Salazar who threw to place, but again Viera saved.

Junior gradually faded before the order and the rapid cons of the Bogota team. Teófilo Gutiérrez had to go too low, thus losing the opportunity to join Sherman Cárdenas and Fabián Viáfara in the last third.

The still ball appeared as the only ally of the Barranquilleros. Sherman took a corner kick and Germán Mera grabbed a rebound inside the area that almost managed to hit the opponent’s goal.

Moments later, Carmelo pivoted Sherman into the area, who with the goal at his disposal could not define in the best way and his shot went extremely wide.

At the end of the first part, June managed to prevail due to the great physical effort made by the Millionaires players. Just at 45 + 2, Willer Ditta sent a deep ball that headed Gabriel Fuentes behind everyone and the ball ended up crashing on the crossbar.

At the beginning of the second half, Junior put pressure again and got results. Cetré won on the left, reached the bottom line and sent a cross that aimed at Teófilo. Godoy grabbed the Barranquillero and Wilma Roldán sanctioned maximum penalty.

The VAR notified the judge that he would review the play and he ended up nullifying the alleged infraction. Millionaires were saved.

At 63 minutes, Junior was finally able to open the albiazul lock. Fuentes crossed from the left, the ball hit a defender and benefited Larry Vasquez who only had to define.

Millonarios approached in the 70s with a header from Ricardo Márquez that went wide and later with a center from the side that almost ended in Germán Mera’s own goal.

The party opened on the end. The visit seeking to equalize the actions and the premises waiting for a counterattack to finalize the match. Round trip on the Metropolitano.

The blue in tow and self-love managed to make the tie at 85 minutes. Eliser Quiñones center side that ended up being badly rejected by Ditta and a goal against.

In the end it would be equality between Junior and Millionaires in the Metropolitan of Barranquilla.

*The article has been translated based on the content of Source link by https://www.futbolred.com/futbol-colombiano/liga-betplay/junior-vs-millonarios-1-1-cronica-del-partido-video-goles-liga-betplay-2020-126257
. If there is any problem regarding the content, copyright, please leave a report below the article. We will try to process as quickly as possible to protect the rights of the author. Thank you very much!

These were the details of the news Junior vs Millonarios 1-1 match report video goals Liga Betplay 2020... for this day. We hope that we have succeeded by giving you the full details and information. To follow all our news, you can subscribe to the alerts system or to one of our different systems to provide you with all that is new.