Manuel Baum sees a mental problem after 21 games without a... 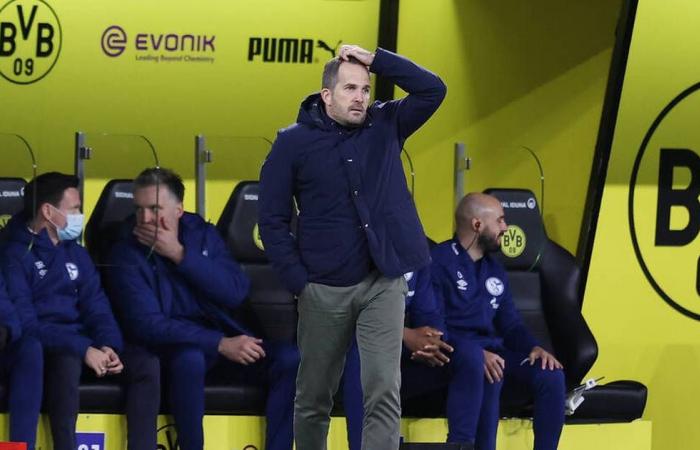 The Schalke Ultras had asked for a reaction from the winless professionals in the “most important game of the year” – but this did not happen!

The CHECK24 double pass with Ewald Lienen, Cacau and Sascha Riether on Sunday from 11 a.m. on TV on SPORT1

Sky-Expert Lothar Matthäus became clear after the final whistle: “Schalke was not a yardstick for BVB. That reminded me of Bayern’s cup game against Düren. Only that Düren was much braver.” The national record player, who compares Schalke with a Middle Rhine fifth division, also said: “If Schalke continues like this, they are a relegation candidate.”

The Royal Blues had kept up for 55 minutes in a 3-2-2-2 tactic against the superior Dortmund team, defending well, disciplined and attentive. But then they broke in helplessly. Manuel Akanji, Erling Haaland and Mats Hummels ultimately sealed the 16th Schalke bankruptcy in the 2020 calendar year.

It is shocking how little progress was made in S04. Nothing at all, to be precise. The statisticians recorded only four ball contacts in the opponent’s penalty area in the first half and actually not a single one after the break. The other horror values ​​from S04 point of view: Only 25 percent possession of the ball, 38 percent won duels and three shots on goal. Schalke remains goalless for the third time in a row in the prestigious Revier derby.

Defender Bastian Oczipka put his finger in the wound: “We started up and put pressure on Dortmund. The pressing was good. What was really, really bad, however, is our game with the ball. We just have to improve . We gave too many balls, had a lot of ball wins, but kept losing them. In the long run, that’s just not enough. “

Just a draw under tree

The coach effect has fizzled out at Schalke for now. Under Manuel Baum, who had followed David Wagner a month ago, Schalke won just one point in three games (1: 1 against Union). This includes the two claps against Leipzig (0: 4) and now Dortmund (0: 3).

The Bundesliga highlights on Sunday from 9.30 a.m. in Bundesliga Pur on TV on SPORT1

Baum was again very active on the sidelines, spoke a lot with his team and actively influenced his players. “Play football, men! Dare to do something,” he encouraged them in the opening minutes. In the break – it was still 0-0 – he accompanied his team with great applause. “Strong guys. Don’t give in now!”

Oczipka thinks: “We are addressing the right topics with him (the coach), very clearly.” The coach himself sees a mental problem with his team. “The biggest problem is: We don’t have enough self-confidence. We have to work on getting hold of the balls and pushing them in. In the end, that’s the only thing that matters: We want and have to score goals. I agree with Lothar when he says “There is no point just defending. We also have to score goals. The main problem is the head.”

Baum made no secret of his mood and said: “I’m annoyed and angry.”

Looking for the king of the league! Register now for the SPORT1 prediction game

Schalke without courage and creativity

The unsettled Schalke professionals hung out, went into the duels with biting bites – but playfully (without the injured Mark Uth and Suat Serdar) nothing came together again. At the moment there is simply a lack of creativity in building up the game, the courage to decide games and the self-confidence to score a goal from the game. “When we have the ball,” says Baum, “we have no self-confidence. That is the greatest field of work that we have now. We have to be bolder.”

“It will continue on Friday,” says Oczipka determined. Then the Schalke expect in Gelsenkirchen VfB Stuttgart. A win against the newcomer is almost a must. “It can switch from one game to another,” Baum concludes. “That’s the nice thing, that’s why I’m staying positive, because in football the weather can change so quickly, you wouldn’t believe it.”

These were the details of the news Manuel Baum sees a mental problem after 21 games without a... for this day. We hope that we have succeeded by giving you the full details and information. To follow all our news, you can subscribe to the alerts system or to one of our different systems to provide you with all that is new.