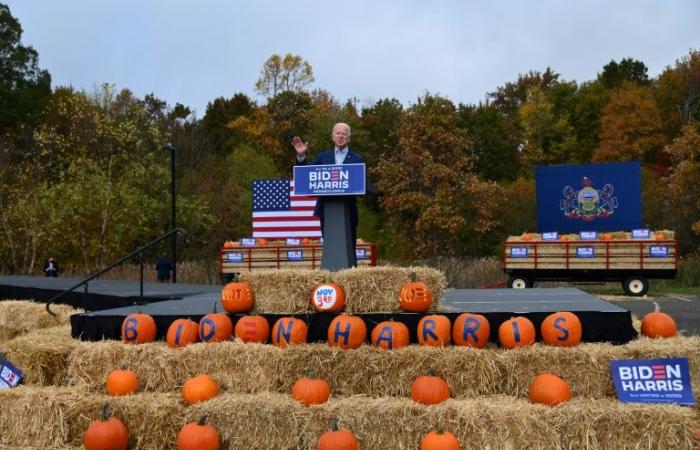 Attacked by Obama and Biden, Trump displays his confidence ten days before the election

An energetic Joe Biden and a faithful Barack Obama on Saturday accused Donald Trump of having “completely screwed up” in his handling of the coronavirus, but the US president has displayed unfailing optimism despite being behind in the polls at ten election days.

Three meetings in as many states for the Republican billionaire, two rallies for the Democratic candidate after a six-day hiatus, and another for the former President of the United States: Saturday saw a series of meetings. you with rare intensity for this campaign tarnished by the Covid-19 pandemic.

“This election is a choice between a Trump super recovery or a Biden depression,” Donald Trump said in sunny North Carolina to a convinced public, highlighting his own recovery from Covid-19 to promise a rapid economic recovery .

Bursting with enthusiasm after voting early in Florida – “for a guy called Trump” – he then followed up with a rally in Ohio before heading to Wisconsin in the evening, as many states -keys for the November 3 election.

“The polls are much better than four years ago. Moreover, they are getting dangerously close,” assured the former 74-year-old businessman who took over the campaign at a frantic pace after his hospitalization.

The polls still give Joe Biden an average eight point lead nationally, with a smaller advantage in key states. But Donald Trump seems to be enjoying a slight thrill in Florida, which he cannot afford to lose if he wants to be re-elected.

“In ten days we will win this great state and we will win four more years in the White House”, he hammered again in Ohio, recalling his victory which had made the polls lie in 2016.

And regardless of the toll of more than 224,000 deaths from Covid-19 in the United States, the record of around 80,000 new cases of coronavirus recorded the day before or the attacks of the Democrats, the tenant of the White House wants to be optimistic.

“This is the Trump presidency,” supported Joe Biden, on the contrary, who returned to the field in his native Pennsylvania, which had contributed to Trump’s surprise in 2016.

The vigorous tone, the 77-year-old Democratic candidate, who is campaigning like a senator and limits contact with the crowd in the name of health precautions, had organized two meetings in the “drive-in” format, speaking on a stage decorated with Halloween pumpkins in front of her supporters honking their horns as one claps from their car.

“Yesterday was the worst day we have had, but again Thursday night, during the debate, Donald Trump said and continues to say that we are at the end of the tunnel, that (the virus) is going away and that we will learn to live with. I told him that we do not learn to live with it, but that he asks us to die with it, “he asserted.

“He still does not have a plan,” he said.

The former vice president of Barak Obama can also always count on the support of the first black president of the United States, who held his own drive-through in Florida, which he won in 2008 and 2012.

Still very popular among Democrats, and still just as comfortable on stage, it was he who had the sharpest formula: “This pandemic would have been difficult to manage for any president,” “but the idea that this White House did anything other than screw up completely is absurd. “

“Donald Trump is not going to suddenly protect us all. He is not even able to take basic precautions to protect himself,” he quipped.

“They made Obama reapply”, “and 42 people showed up”, immediately mocked the Republican, who does not hesitate, for his part, to organize more massive rallies with few masks and distancing. “We have thousands, tens of thousands of people,” he added, as if to maintain a meeting competition.

The ex-real estate mogul has promised to spend five meetings a day in the home stretch.

Like more than 55 million voters who have already voted early before November 3, he performed his civic duty early in the morning from a library in West Palm Beach, near his property in Mar-a-Lago, his tax residence since leaving New York, where he was booed four years ago when it came time to vote.

These were the details of the news Attacked by Obama and Biden, Trump displays his confidence ten days... for this day. We hope that we have succeeded by giving you the full details and information. To follow all our news, you can subscribe to the alerts system or to one of our different systems to provide you with all that is new.