The teacher who wanted to talk and the radical who silenced... 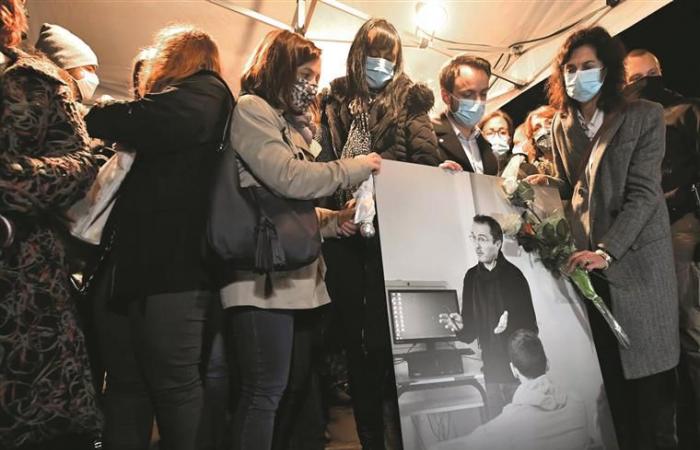 Samuel Paty was an ordinary man and, certainly, when the present school year began, the third at the Bois d’Aulne school, he would have been far from imagining that he would become a martyr for freedom of expression or receive the posthumous title of Legion of Honor , the most important French decoration.

At least three years ago, the teacher did an exercise with his students (confirm their own) during citizenship classes. In order to promote a debate on freedom of expression, terrorism and religious intolerance, he showed cartoons in class that satirized the prophet Muhammad.
He did not do so in order to insult anyone, he himself invited Muslim students to leave the classroom if they were sensitive to this topic.

This school year was the last time that Paty practiced her exercise. The display of a cartoon from Charlie Hebdo magazine, the target of a terrorist attack in 2015, generated outrage in some students and their parents. Although Paty did not show the cartoons “to be controversial or to disrespect students”, as the father of a student would say, the fact is that, after the controversial class, another 13-year-old student described that the teacher “was uncomfortable ».
Following what was reported as an Islamophobic act, the father of a student went to the school to demand the dismissal of the history and geography teacher. Missing the mission’s objective, the man appeared alongside a member of the terrorist group Hamas where they enacted fatwa – the same Islamic execution decree that was addressed to Salman Rushdie when he published The Satanic Verses – to Paty.

Who answered this call was Abdoullah Anzonov, an 18-year-old born in Moscow, but of Chechen origins. On November 16, when Paty returned home, where she lived with her five-year-old son, Anzonov approached the teacher. While shouting “Allahu Akbar” he beheaded him with a knife.

Anzonov was eventually shot down by the police shortly after the murder, but not before he admitted on Twitter that he had committed the crime.

From the description of alumni and colleagues, few would have imagined that Paty’s life would end so cruelly.
“Totally dedicated to the profession”, summarize the teachers who worked with him. “He really wanted to teach us,” confirms Paty’s former student, Martial, 16, barely younger than the murderer.

«When my son had a problem, he heard it. Nobody deserves this, least of all he », said the mother of a student, Nathalie Allemand.

«I am destroyed. Samuel Paty was my fellow graduate student. He was a brilliant student, a super teacher, a man of dialogue », wrote a former colleague of the victim on Twitter, Christophe Capuano. “I will quote your name and your example, comrade, to everyone who will still want to practice this beautiful profession,” he added.

The man of Chechen origin moved to France in 2008, when he was 4 years old. Anzorov only had a criminal record of common crimes. However, the anti-terrorist attorney general, Jean-François Ricard, says that its radicalization is evident, referring that on his mobile phone they discovered the claim text, published on Twitter, before the attack, as well as the photograph of Samuel’s beheaded head Paty.

Accompanying the image was still a message to the French President, Emmanuel Macron, explaining that he intended to proceed with the execution on behalf of Allah. In this text, he called Paty “a dog from hell” who “tried to belittle the prophet Muhammad”.

The Russian refugee was described by neighbors as a “discreet” and “lonely” young man who for about three years was “immersed in religion”. A young man who lived in the same neighborhood as the murderer told AFP that he “must have been manipulated or seen too many video films”. But he left a caveat: “This has nothing to do with our community”.

Chechens in France are under close surveillance by internal security services. According to the coordinator of the secret services and the fight against terrorism, this community represents between 15 and 20% of radicalized Islamists, it can be read on the website Rádio França Internacional.

Fearing “stigmatization”, the Assembly of Chechens in Europe condemned this crime. «No community can be held responsible for the isolated acts committed by its fellow countrymen».
Following the beheading, the French police have already launched several police operations against “dozens of individuals” involved in the Islamist movement and closed a mosque in Paris.

“Samuel Paty was killed because Islamists want our future and they know that with silent heroes like him they will never have it,” said Macron, who has guaranteed further action against radical Islam.
French Muslim activist Yasser Louati told Al Jazeera that “Muslims are being targeted” and added that the French President is using “Islamophobia to boost his campaign”.

Aftermath of the attack

In the meantime, nine accomplices to the crime have already been brought to court. Among the defendants is Brahim C., father of a student, who called for a mobilization against Paty and who exchanged messages with Anzorov, as well as the Islamic radical Abdelhakim Sefrioui, who accompanied the student’s father in this mobilization.

In addition to Brahim and Sefrioui, two underage students, aged 14 and 15, who are suspected of having received money from the attacker in exchange for information about the victim, will appear before the judge. According to the attorney general, the identification of the teacher “was only possible due to the intervention of the students”. The attacker reportedly offered between 300 and 350 euros in exchange for the information.

Also present in court were three of the attacker’s friends who turned themselves in to the police on Friday night.
Samuel Paty was honored throughout France with demonstrations in favor of freedom of expression.
The teacher was distinguished by Emmanuel Macron with the Legion of Honor posthumously, and the son, five years old, was declared a “pupil of the nation”, a distinction attributed to the children of parents killed in combat or in an attack. J

These were the details of the news The teacher who wanted to talk and the radical who silenced... for this day. We hope that we have succeeded by giving you the full details and information. To follow all our news, you can subscribe to the alerts system or to one of our different systems to provide you with all that is new.