Elise Mertens: “I am motivated to do well this week.” 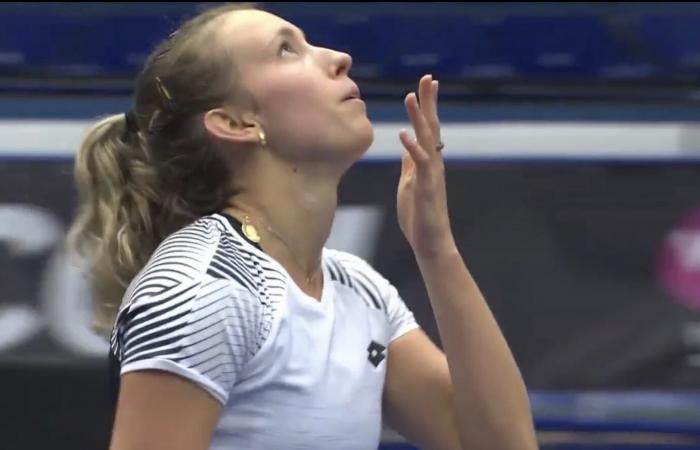 Together No. 7 Elise Mertens of Belgium showed how important it is to play from the front to win a game. It made a difference in her 6-2, 6-3 first-round win over No. 30 Amanda Anisimova of the United States at the WTA Premier Open J&T Banka Ostrava on Wednesday in Ostrava, Czech Republic.

The Belgian’s serve was not interrupted during the 72-minute game on the slow-playing center court of the Ostravar Arena. She saved all five break point opportunities she faced and with each one she swept aside, the frustration on Anisimova’s face became more evident. It seemed like the 19-year-old American couldn’t do anything to astound the 24-year-old Mertens, who kept her focus throughout.

A crucial point in the game came after Mertens broke Anisimova’s serve for the third time and finished 3-2 in the second set. During the sixth game with 12 points, Mertens intervened deeply and saved three break points to achieve a 4-2 advantage.

“I think it was very important to hold my serve because she attacked my second serve” Mertens told Tennis TourTalk during a video call after their victory. „[Amanda] is a good striker so you really have to pay attention to every point. She can make some good points, but she can also make some mistakes. For me it was important to keep my balance and get the balls back in and try to be more aggressive in the rallies. I think it made a difference to keep my serve in a close game in the second set. “

From that point on, Mertens never looked back. Three games later, she secured victory on her second match point. Merens is now unbeaten in two head-to-head games against Anisimova.

Mertens, who is 8-2 in her last 10 hard court games, continues to play without number 28 Karolina Muchova the Czech Republic in the second round on Thursday with a berth in the quarterfinals on Friday at stake.

Before arriving in Ostrava, Mertens took a few days off after losing to French Caroline Garcia at Roland Garros in the third round and then went back to her usual fitness and tennis routine every day. “It is my vision to improve as much as possible” She said. “I am motivated to do well this week and I hope I can go further.”

Looking back over the past few months, Mertens was one of the busiest competitors on the WTA Tour. Ostrava is their seventh tournament since the women’s tour restarted in August. “I didn’t really have expectations because you never really know what to expect when you haven’t played for five months and the other girls have played for five months.” She said.

After losing the first round in Palermo on clay, Mertens was a finalist in Prague, semi-finalist at the Western & Southern Open in New York, quarter-finals at the US Open and in Rome and reached the third round at the French Open.

“After Palermo I felt the rhythm and speed again [of the court] and a vision of how I wanted to play ”. said Mertens, whose 29 victories are linked to 19th place Elena Rybakina from Kazakhstan for first place in the WTA this year. “The more games you play, the more you get the rhythm.”

• After depositing the first set of No. 4 seeds Victoria Azarenka of Belarus stormed back to prevail against No. 85 Barbora Krejcikova from the Czech Republic, 2-6, 6-2, 6-1, in two hours and 13 minutes. Azarenka’s sixth ace, landing in the middle of the court, brought a emphatic coda to her second-round win. She only dropped three games after the opening set. It was the fourth time this season that Azarenka caught up from a loss to win.

„[Barbora] started so well and played so easily “Azarenka said during a video conference chat after her victory. The Belarusian had 16 breakpoints during the game, half of which ended up in the opening set.“I don’t think I played badly, but she was one step ahead – everything worked [for her].

“What helped me was that I understood and had to change and adapt. My usual recordings, which can take a lot of my time, didn’t work, so I had to adapt and find a new tactic. I knew I had to be more aggressive and come in a little more and be more effective. More than anything, my fighting spirit got me into the game and I picked up on my game [the first set]. ”

Azarenka broke Krejcikova four times, showing her 91-81 as she advanced to Friday’s quarter-finals against Elise Mertens or Karolina Muchova.

• Unseed and 44th place Jelena Ostapenko took control of their match against seed # 5 Petra Martic from the start and upset the 18th Croat 6-3, 6-1 with an impressive performance in just under an hour. From 0-2 in the first set, Ostapenko won five games in a row and took the lead. She finished the first set with 20 winners. Soon the Latvian finished her victory with an emphatic winner. Ostapenko, who lost just 19 points on her serve, showed Martic 59-38 to advance to the second round against No. 32 on Thursday US Jabeur from Tunesia.

“I think I played really well today” Ostapenko said. “It took me a few games to get used to the hard court. I did not give [Petra] any chances of playing their game. I played very sharp, used drop shots, and messed up a little. I was very aggressive in the crucial moments. “

These were the details of the news Elise Mertens: “I am motivated to do well this week.” for this day. We hope that we have succeeded by giving you the full details and information. To follow all our news, you can subscribe to the alerts system or to one of our different systems to provide you with all that is new.