Alain Berset evokes the possibility of a “mini-lockdown” 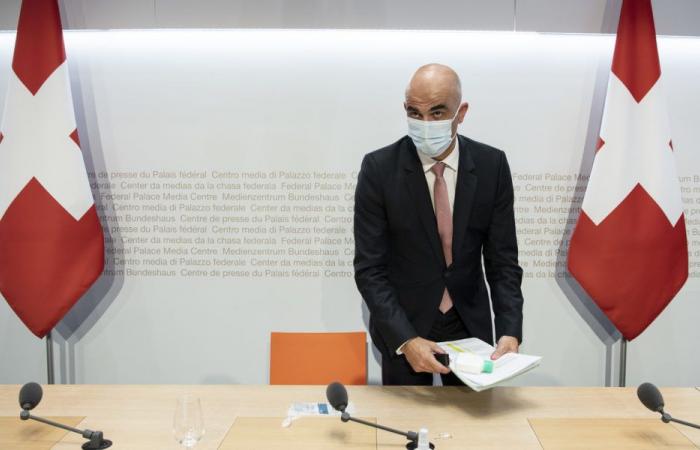 While Switzerland had 5596 additional cases of coronavirus on Wednesday, Alain Berset mentions the possibility of mini-containment. For their part, several cantons and hospitals have stepped up in the mobilization.

During the last 24 hours, eleven more deaths are to be deplored and 115 patients have been hospitalized. The cases are doubling every week, warned the Minister of Health Alain Berset, specifying that this was not limited to positive cases, but also to hospitalizations.

All options are possible, including a curfew or mini-containment, according to the minister. “The situation is changing very quickly.” Asked about the economic cost of a “mini-lockdown”, “the Federal Council is not there yet”. We hope not to have to go through this, he added.

There are large disparities between cantons, the most affected showing an incidence rate of 900 per 100,000 inhabitants, the least affected by 130 per 100,000, ie a ratio of one to seven. Thursday, Alain Berset predicted to meet the conference of cantonal health directors.

The townships did not remain inactive on Wednesday. Several have announced measures of all kinds, including Valais, one of the most affected.

“We are at 390 cases per day”, noted the president of the Valais government Christophe Darbellay. Although it is difficult to compare with the first wave when testing was not as regular, “in March at the height of the epidemic, we were at 100 cases per day”.

Fourteen EMS are affected, 155 residents and 108 staff members infected. The Valais government has therefore also decided to suspend visits to hospitals and nursing homes. Valais has become the Swiss canton with the highest number of new cases in proportion to its population.

Also in this canton, public establishments such as restaurants will now close at 10 p.m. until November 30. This measure, still unprecedented in Switzerland, is part of a series of decisions taken by the Council of State on Wednesday.

In Geneva too, the authorities have taken new measures. “We are very worried,” the president of the Geneva Council of State Anne Emery-Torracinta said on Wednesday. The HUG, as in the spring, are transformed into a hospital dedicated to Covid. Only urgent surgical operations are maintained. Non-essential interventions are suspended.

Post-operative units switch to Covid units. The clinics have been called upon to welcome HUG patients. Decisions will be taken by the end of the week, State Councilor Mauro Poggia said. The current measures are indeed not sufficient to stop the spread of Covid-19.

BE-BS: no more matches with more than 1000 spectators

While in Valais any practice of a sport involving contact is now prohibited, other cantons are content to limit attendance at the stadium. Thus the number of spectators attending the home matches of FC Basel or another major event in the Rhine city will now be limited to 1000. A measure already taken by the canton of Bern last Sunday, which notably affects a cup match of Young Boys Europe.

Since October 1, the Confederation has again authorized the arrival of more than 1,000 spectators for major events with a strict concept of protection against Covid-19, including compulsory mask.

While Valais limits the opening hours of public establishments to 10 p.m., in the canton of Solothurn bars, discos and nightclubs must now close at 1 a.m. The number of people present in the clubs will remain limited to 300.

Among other restrictions announced on Wednesday, in Zurich, city employees will wear masks in government buildings in the future, even in areas where the public does not have access. In Ticino, wearing a mask is also compulsory since the start of the week in the administration and employees will receive support for teleworking until mid-November in any case.

“We are not yet in a red phase, but the situation is serious”, declared Norman Gobbi, president of the cantonal government. Thus 255 new infections were reported Wednesday against 137 Tuesday: the number of cases has doubled every five to seven days on average in October.

These were the details of the news Alain Berset evokes the possibility of a “mini-lockdown” for this day. We hope that we have succeeded by giving you the full details and information. To follow all our news, you can subscribe to the alerts system or to one of our different systems to provide you with all that is new.