Mujica resigns from the Uruguayan Senate and retires from active political... 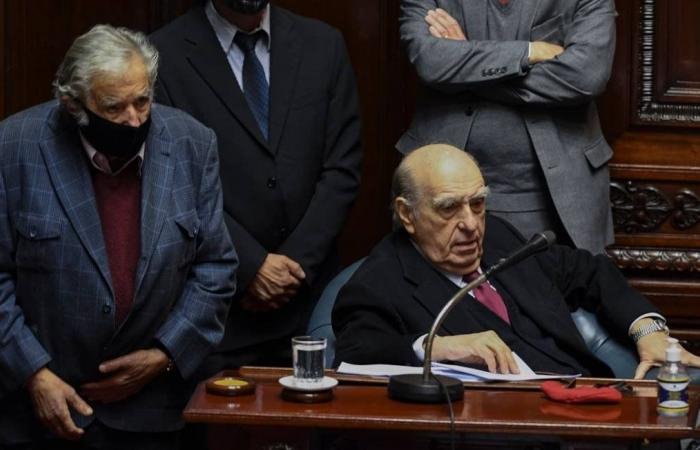 Mujica, 85, said goodbye to Congress on Tuesday, a date that also marked the resignation of another former president, Julio María Sanguinetti (1985-1990 and 1995-2000), 84, of the Colorado Party. Political opponents decided to leave the Senate in a joint session, a gesture classified by other parliamentarians as a “reflection of democracy”.

Context: With Mujica as a backdrop, film tells story of refugees and homeless in Spain

Applauding standing, Mujica gave an emotional thanks to his colleagues and the employees of the House. According to him, his departure does not “mean abandoning politics, but abandoning the front line”.

– In my garden, I haven’t cultivated hate for decades. I learned a hard lesson that life imposed on me. Hate ends up making people stupid – said the former president, who spent 13 years in prison during the military dictatorship. – I went through everything in this life, I was tied by a wire for six months, with my hands behind my back, I was two years without being taken to bathe and I had to bathe myself with a glass. I’ve been through everything, but I don’t hate anyone and I want to tell young people that triumphing in life is not winning, but getting up every time I fall.

Regional exception: With only 45 deaths from Covid-19, Uruguay is paradise in the pandemic hell

In September, Mujica revealed that, due to a chronic immune disease, he will not be able to get a vaccine against the coronavirus when it becomes available. Now, he said he will act as an “advisor” for his supporters.

– I’m going because the pandemic is driving me out. To be a senator is to talk to people and walk everywhere. I am threatened on all sides: by old age and by my chronic illness – he said.

Shortly before the session, Mujica said that the joint farewell with Sanguinetti occurred because after talking and realizing that they were “on the same corner”. According to the former leftist president, the symbolism of this is important for Uruguay because, “in other countries, they [adversários políticos], they don’t even greet each other “.

Sanguinetti, for his part, recalled in a farewell letter that his resignation had been planned since before the 2019 national elections. The decision, he said, was made by the need to attend the Colorado Party general secretary and his activities as journalist and editorial correspondent.

Mujuca has a long political and militant career: during his youth, he was part of the Tupamaros guerrillas that fought against the military dictatorship in the country, a participation that left him imprisoned from 1972 to 1985. In 2018, when he announced that he would leave politics, he said in a letter to be “tired of the long trip” and that he would “take refuge in retirement”.

In power, he became known worldwide for his posture and simple life – until today, he moves around with an old blue beetle – and for having a more progressive government, with the decriminalization of abortion and marijuana, in addition to the legalization of marriage between people. of the same sex. The politician also donated a large part of his salary to the Presidency, considering that in Uruguay “many poor people live”.

Wide Front: In 15 years, leftist governments in Uruguay have advanced in rights, but left debts

The farewell was marked by greetings and kind words from other senators. Óscar Pepe, of the Frente Ampla, said that “Pepe’s ideal thrills” because “dedicating your life to politics has to do with injustices that afflict you”:

– To live is to have causes, to live is a struggle, and for that reason the gratitude of being able to live alongside companions like Mujica – he said.

Sanguinetti was president during the Uruguayan democratic transition, when he was elected by popular vote in 1985, after 13 years of dictatorship. In 1995, he won the elections again. For decades, she has been one of the leading leaders of the Colorado Party, which, in its more than 180 years, has been predominant in different governments of the country. Its popularity, however, fell after the government of Jorge Batlle (2000-2005), who in 2002 faced one of Uruguay’s biggest economic crises.

These were the details of the news Mujica resigns from the Uruguayan Senate and retires from active political... for this day. We hope that we have succeeded by giving you the full details and information. To follow all our news, you can subscribe to the alerts system or to one of our different systems to provide you with all that is new.