Bolivia, the currency and the future in the air 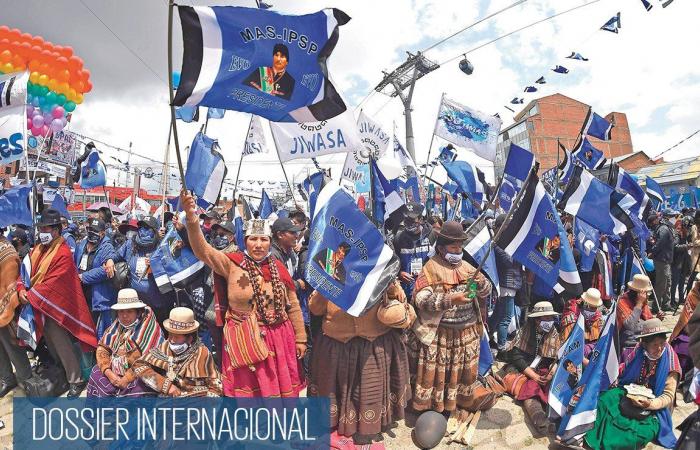 San José.— A boliviano (the Bolivian currency) is in the air and in a political bet.

With its image of an indefinite route, as it rises and falls, the round piece of stainless steel describes the unrest that prevails in Bolivia when attending a historic general elections today.

Famous for dragging for more than a century one of the royal legends of the greatest political, institutional, socioeconomic, electoral and military instability in America, the country rich in tin, silver, copper, iron, gold, potassium, lithium, natural gas and leaf. de Coca will elect today president, vice president, 36 senators and 130 deputies.

The imaginary fall of the monetary unit of 27 millimeters in diameter and five grams of weight, smooth and cylindrical, on either side of its edge, in a transcendental contest for the votes with the end of a photograph, will mark the future of the country: sustainable democracy or populist authoritarianism?

The route will mark a nation with a bulky record of coups d’état and military riots. With 7.3 million voters, only three of the six presidential candidates have options to win today or move on to the second round of November 9: the economist Luis Arce, of the leftist Movimiento Al Socialismo (MAS); former president Carlos Mesa, from the center-left Citizen Community, and businessman Luis Fernando Camacho, from the right-wing Creemos.

Arce is the favorite to win in the first round, but without the necessary percentage to avoid a second, in which the one who advances between Mesa and Camacho could join the one left out today and eventually triumph with a simple majority. With the anti-MAS divided, Mesa would surpass Camacho, according to polls.

In another way of uncertainty, Arce anticipated that he will win today and that only a fraud will take the Presidency from him, so he warned that he would refuse to acknowledge his defeat and ratified that he mistrusts the Supreme Electoral Tribunal, which he demanded transparency.

From his asylum in Argentina, former President Morales gives orders as a crucial protagonist of the battle and leader of the MAS, after being a controversial factor in struggles and brawls that broke out before, during and after the elections of October 20, 2020, They prolonged today’s voting and could be extended in the coming hours, days, weeks and months, with an uncertain outcome.

“Bolivia lives a tense calm and a high degree of polarization. The political forces are fragmented, but the concentration of the vote is not, ”said Bolivian Franklin Pareja, a political scientist with a master’s degree in Business Administration and professor of Political Science at the (state) Universidad Mayor de San Andrés, in La Paz.

“The democratic and institutional restoration is at stake or the return to an autocratic and totalitarian regime”, Pareja told EL UNIVERSAL. “Bolivia went through [en 2019] a failed stage due to electoral fraud perpetrated by Morales and which was the culmination of a systematic violation of the Political Constitution that caused the breakdown of the democratic system, ”he insisted. In a trance “of anxiety”, there are many undecided and “nothing is said”, he narrated.

A convulsion broke out in Bolivia after the elections a year ago, in which Morales ran to start, in January 2020, a fourth consecutive period from 2006 to 2025.

Faced with military and police pressure, Morales resigned on November 10 after an audit by the Organization of American States confirmed electoral irregularities.

The ex-president denied the accusation of fraud, claimed that he won legally and that he suffered a coup. On the 11th of that month he accepted an offer of political asylum from the Mexican government and on the 12th he traveled to the Mexican capital, where he remained until on December 12 he moved to Argentina to take refuge and install a political radar in a neighboring country of Bolivia.

As senator in line of succession, lawyer Jeanine Áñez, an opponent of MAS, took office on November 12 with the initial goal of ending Morales’ term in January of this year. If there is a winner in the first round, Áñez will hand over power between November 23 and December 5 and if there is a need for a second round, he will do so between December 22 and 26. The future president will govern for five years.

To win in the first, two conditions are required: obtain more than 50% of the votes or receive a minimum of 40% of those votes and with a difference of at least 10% over the second most voted candidate. If the conditions are not met, the applicants who achieve the first two positions go to the second round.

In addition, Bolivia will define today the balance of forces in the Chambers of Senators and Deputies, key for the development of the future government. The elections were initially scheduled for May 2020, but the coronavirus crisis forced them to be postponed to September and then October.

The Economic Commission for Latin America and the Caribbean (ECLAC) predicted this month that, as a consequence of the disease, Bolivia will close 2020 with an economic contraction of minus 5.2% of the Gross Domestic Product (GDP), which increased 4.2% in 2018 and 2.2% % in 2019. Due to the effect of Covid-19, Bolivia’s monetary reserves fell from 8,317 million dollars in June 2019 to 6,272 million in June 2020, according to ECLAC.

The (state) Institute of Statistics of Bolivia revealed that, with 50% of the 11.7 million Bolivians in poverty and extreme poverty, urban unemployment rose from 4.83% in December 2019 to 8.4% in June 2020 due to the virus, in a country where about 69% of the population is urban. The World Bank estimated for this year a total workforce of 5.8 million people. “Bolivia is at stake for the economic and political stability of the next 20 years,” said Franco Gamboa, a political sociologist and international relations analyst.

“The next government will face a very deep crisis due to the pandemic and will have to rebuild the possibility of economic diversification to stop being so dependent on our raw materials,” predicted Gamboa. When urging to get out of the “monoextractivism” that tied Bolivia to its production of minerals and natural gas, he stressed that the next two decades “will be fundamental [para impulsar] sustainable development policies in difficult conditions ”, such as climate change.

On the political flank, the next government will have to generate “governability with full independence of the powers. The Judicial has been invaded by the Executive. There is no impartial administration of justice. Clear rules for democratic development must be established, ”Gamboa explained to this newspaper. “The next Legislative Assembly [bicameral] it must avoid indefinite re-election, guarantee the renewal of the president and vice president every five years and make possible a fully democratic alternation in power to protect the institutionality with long-term stability, ”he argued.

The struggle referred to Evo’s desire to perpetuate himself in the presidency. After assuming the 1967 Constitution for the first time in 2006, Morales called in that year to the polls for a Constituent Assembly that drafted a Magna Carta, which in 2009 was approved in a referendum and entered into force. The presidential term went from four years to five years and with the option of being re-elected “once” on a continuous basis.

With the new Constitution, Morales’ first term, from January 2006 to January 2010, did not count and could be elected in 2009 and 2014. Morales lost a referendum in February 2016 to introduce a constitutional reform and run again.

With the argument that re-election is a human right, a Bolivian constitutional court in November 2017 removed the limit and allowed Morales to be reelected indefinitely.

That is why, in a barracks of political tact in Argentina, Morales listens, sniffs and peers from afar and promotes a plan. Of his return?

The currency, in Bolivia, is in the air.

Luis Alberto Arce Catacora became a candidate for the presidency of Bolivia in January of this year by the leftist Movement for Socialism-Political Instrument for the Sovereignty of the Peoples (MAS-IPSP), a party force with a majority indigenous and coca growers linked to the former president. Evo Morales.
57 years old, married twice with three children, kidney cancer survivor from La Paz, master economist, general accountant and university professor, Arce was Minister of Economy and Public Finance in the three consecutive governments of Evo -2006 – 2017 and from January to November 2019 – and he was classified as the brain of the economic growth that Bolivia registered in those 13 years.

Carlos Diego de Mesa Gisbert repeats as presidential of Bolivia in 2020 for the center-left Citizen Community, after competing for that bloc of the Left Revolutionary Front, Chuquisaca Somos Todos and Agrupación Ciudadana Jesús Lara in 2019 with the fame, negative or positive, of who was president from 2003 to 2005.

67 years old, married twice and with two children, politician, journalist and historian, Mesa went from vice president to president when Gonzalo Sánchez de Lozada had to resign due to popular pressure. Cornered by street demonstrations led by the then coca grower leader Evo Morales, Mesa also had to resign.

Luis Fernando Camacho Vaca proclaimed himself in November 2019 as the presidential candidate of Bolivia and, in the previous January, he finalized his plan as a candidate for the right-wing Creemos alliance, after leading popular mobilizations that broke out in that country and accelerated the resignation of Evo Morales when accused of him. of fraud in the elections of October of that year.

41-year-old, Catholic, single, with three children, businessman, lawyer and from Santa Cruz de la Sierra, Camacho jumped to the protest against Morales as president of a powerful civic committee in his hometown and ran with the support of the Right-wing Unity Civic Solidarity, Christian Democrat and Nationalist Democratic Action parties.

*The article has been translated based on the content of Source link by https://www.eluniversal.com.mx/mundo/bolivia-la-moneda-y-el-futuro-en-el-aire
. If there is any problem regarding the content, copyright, please leave a report below the article. We will try to process as quickly as possible to protect the rights of the author. Thank you very much!

These were the details of the news Bolivia, the currency and the future in the air for this day. We hope that we have succeeded by giving you the full details and information. To follow all our news, you can subscribe to the alerts system or to one of our different systems to provide you with all that is new.