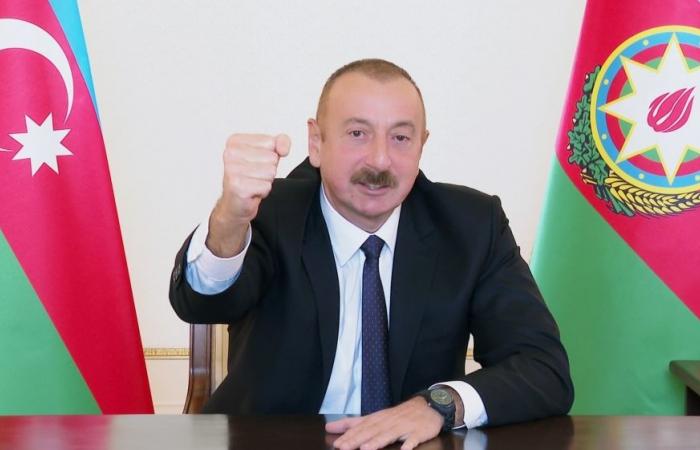 On Saturday, Azerbaijani President Ilham Aliyev announced that his country’s army had liberated the entire city of Fuzuli from the Armenian occupation, while the Azerbaijani Ministry of Defense announced the shooting down of an Armenian fighter in Karabakh.

In a speech to the people, the President of Azerbaijan said that the army liberated the city center of Fuzuli, and all of the villages of Kuchmitli, Chemin, Jovarli, Berahmitli, Musabili, Ishqali and Diddili, which belong to it.

The Azerbaijani army had succeeded in recovering some villages of Fuzuli from the Armenian occupation, earlier, in the counter-operation it launched about 20 days ago to liberate its occupied lands.

In 1993, Armenia occupied the city of Fuzuli and most of its villages, where more than 144,000 people lived there before the occupation.

The area of ​​Fuzuli Governorate is 1,386 square kilometers, and includes the governorate center and town, and 75 villages, of which only 20 villages have not been subject to the Armenian occupation.

An Armenian plane shot down

On Saturday, the Azerbaijani Ministry of Defense announced that an Armenian Sukhoi-25 warplane was shot down in the Karabakh region.

The ministry said in a statement that an Armenian army warplane launched an air attack on the Azerbaijani army near the city of Gabriel, today.

It confirmed that the Azerbaijani air defense forces shot down the Armenian fighter.

The ministry also announced that its armed forces will continue to inflict heavy losses on the Armenian army in the ongoing clashes on Saturday night.

The ministry said in a statement that the Azerbaijani army managed to break the Armenian forces’ defense lines at several points and made progress in them, indicating that it controlled a number of hills and strategic sites.

The statement added that the Azerbaijani army incurred heavy losses on its Armenian counterpart, as it managed to destroy 7 tanks, two Grad missile systems, 8 D-30 cannons, a D-20 gun, and 10 vehicles loaded with ammunition.

He pointed out that a large number of Armenian army soldiers were killed and wounded, with about 300 soldiers from the 1st Mechanized Regiment fleeing their positions.

He affirmed that the Armenian army continues to violate the humanitarian truce between the two countries, as it targeted with artillery shells the cities of Tatar, Agdam, Barda and Akgabdi.

The high number of victims of the Armenian aggression

The number of people who died as a result of an airstrike launched by the Armenian army on the Azerbaijani city of Ganja late Friday evening rose to 13.

This came, according to a statement issued by the Azerbaijani Public Prosecution, on Saturday.

The statement indicated that the death toll in the recent missile attack on the second largest city in Azerbaijan reached 13, while the number of wounded exceeded 45.

The statement also indicated that a number of homes, workplaces and vehicles were damaged as a result of the attack.

On September 27, the Azerbaijani army launched an operation in Karabakh, in response to an Armenian attack targeting civilian areas, during which the army managed to liberate the cities of Gabriel and Faduli, the town of Hadrut, and dozens of villages.

On October 9, a humanitarian truce was reached in Moscow between the foreign ministers of Azerbaijan, Armenia and Russia, but Yerevan violated it after less than 24 hours by bombing the city of Ganja, killing and wounding civilians.

The death toll from the Armenian bombing of residential areas in Azerbaijan since September 27 was 60, and the number of injured exceeded 267 (official figures).

These were the details of the news Azerbaijan announces the liberation of Fuzuli city completely, inflicting heavy losses... for this day. We hope that we have succeeded by giving you the full details and information. To follow all our news, you can subscribe to the alerts system or to one of our different systems to provide you with all that is new.