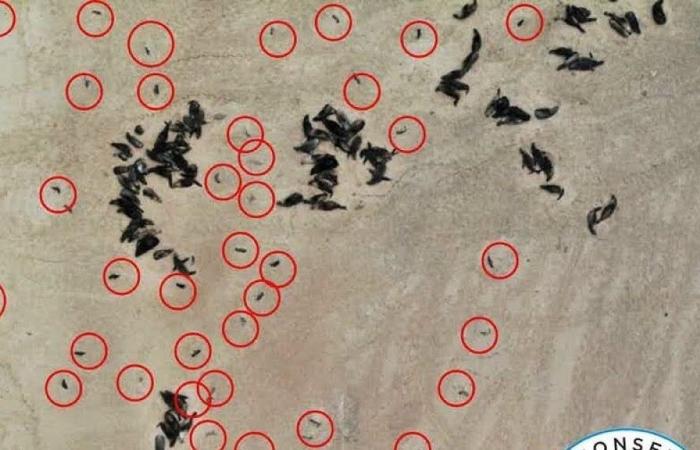 The bodies were discovered by the organization Ocean Conservation Namibia, which sent a drone out to the seal colony on October 5, and could count several hundred of them lying in the sand.

– All the red circles show dead baby braces. A rough estimate is more than 5,000 in this colony alone. This is tragic, as it accounts for a large proportion of the newborn baby seals that were expected at the end of November, the organization writes on

This is the situation at Pelican Point, Namibia. All the little red circles mark dead seal pups. A rough estimate brings the numbers to more than 5000 at our seal colony alone. This is tragic, as it makes up a large portion of the new pup arrivals expected in late November. pic.twitter.com/sBwLAGRVM8

The dead fetuses must be African fur seals. The species lives primarily along the coasts of Namibia and South Africa.

Tess Gridley at Stellenbosch University is part of the research team that monitors the situation for seals in the area. She tells The Guardian that it is normal to find dead baby braces at this time of year, but not on this scale.

She is said to have discovered several dead fetuses already in August. Around 150 have also been found at the Cape Cross colony further north. She says that the estimate of 5,000 is uncertain, as many carcasses are probably eaten by scavengers.

– This may mean that the ordinary gestation cycle is disturbed for the affected colonies. Usually the females will give birth to one offspring each year, before they quickly become fertile and mate again. If the females miscarry, they can become fertile earlier, while the males have not prepared for the mating, she says, and adds:

– The females are also very thin, and may be unable to reproduce, she says.

Gridley cites food shortages, diseases and toxins as possible causes, but points out that they do not currently have data confirming this.

Researchers are now working to collect data to analyze the cause of miscarriages.

These were the details of the news Thousands of seal fetuses found dead for this day. We hope that we have succeeded by giving you the full details and information. To follow all our news, you can subscribe to the alerts system or to one of our different systems to provide you with all that is new.