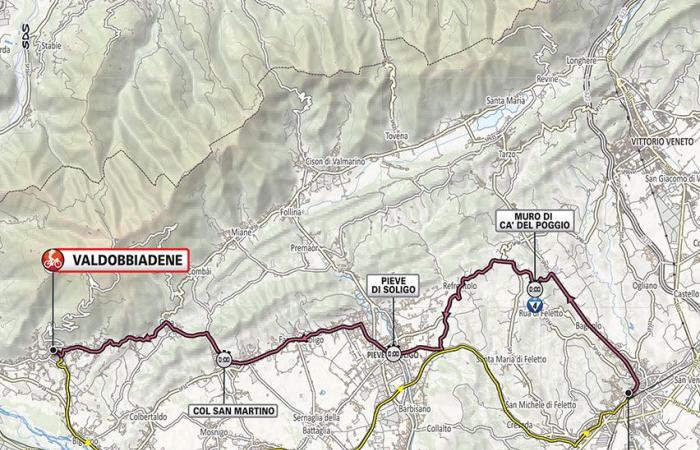 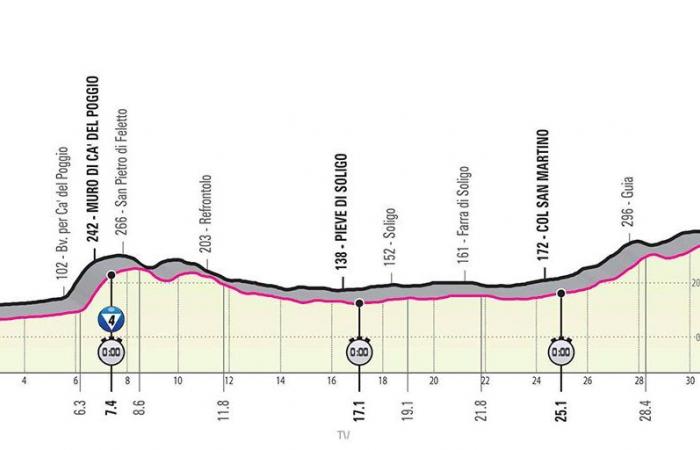 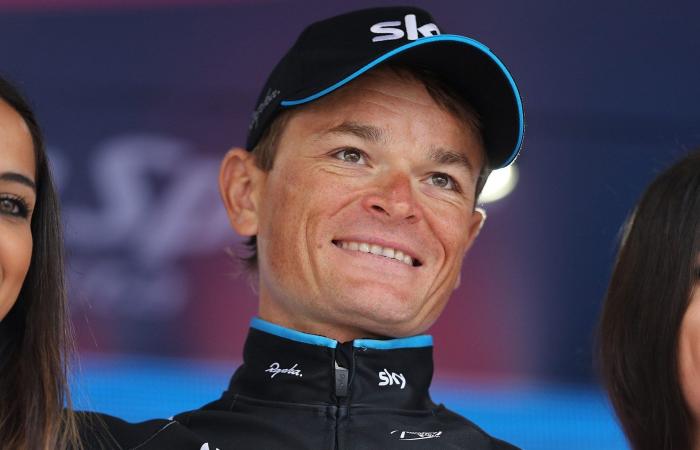 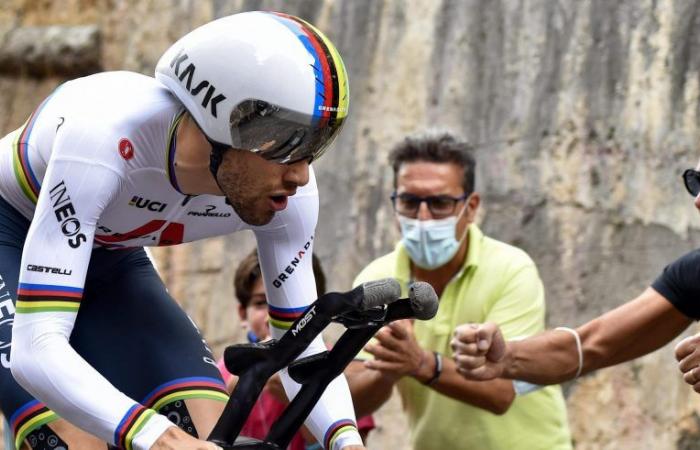 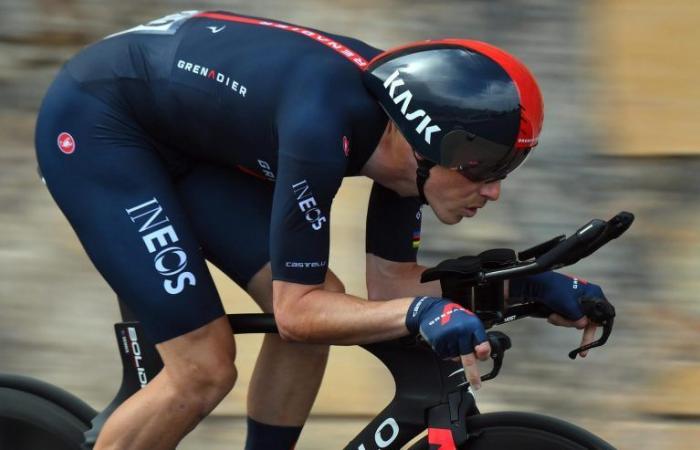 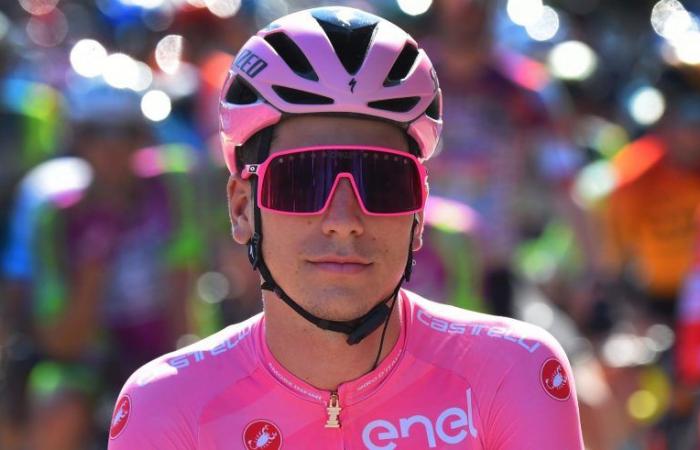 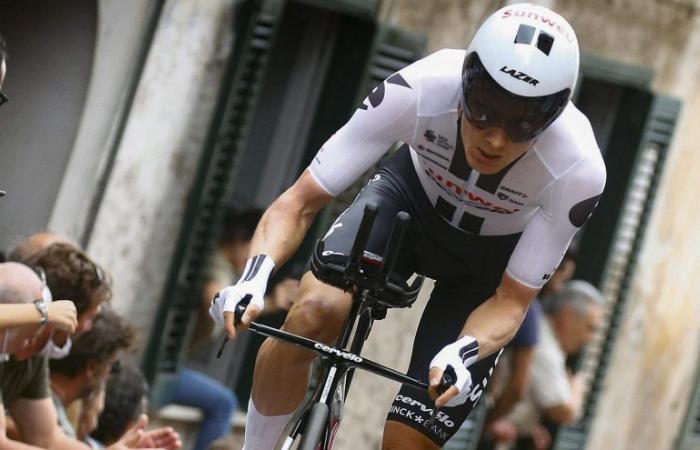 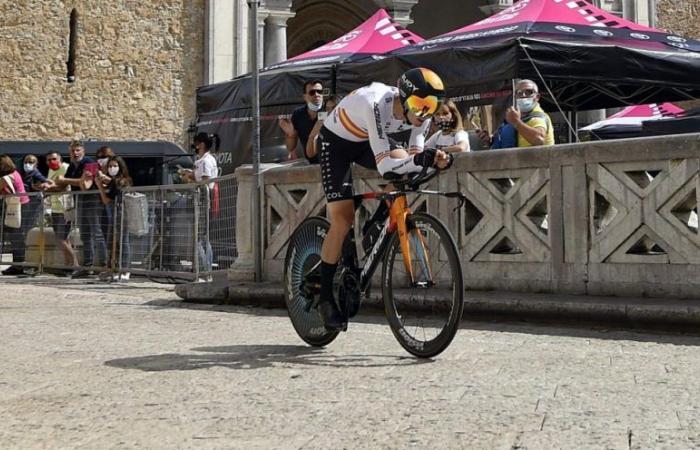 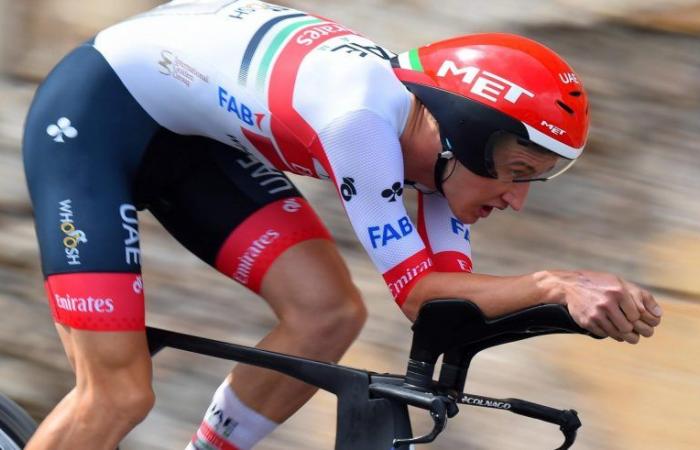 The Giro d’Italia 2020 is exactly two weeks away. On Saturday, the riders in the Veneto region will be presented with a time trial of more than 34 kilometers over hilly terrain. In the opening time trial the differences were already large, here they will probably be even greater. We look ahead to the course and the contenders.

It seems a long time ago that world champion Filippo Ganna set the fastest time in Palermo with a dizzying speed of 58.8 kilometers per hour. On the fifteen-kilometer course with a nasty climb at the start, he was 22 seconds ahead of João Almeida and the three-time U23 world champion Mikkel Bjerg. The second individual round against the clock is scheduled for the fifteenth day of the Giro d’Italia.

It takes place in the hills of the Prosecco region between Conegliano and Valdobbiadene. The stage is therefore designated the Prosecco Superiore Wine Stage, after the wine that is made from the grapes from this region. The course builder has done his best to plan an hilly and therefore demanding time trial. Who does the best business after the longest time trial of this Giro? 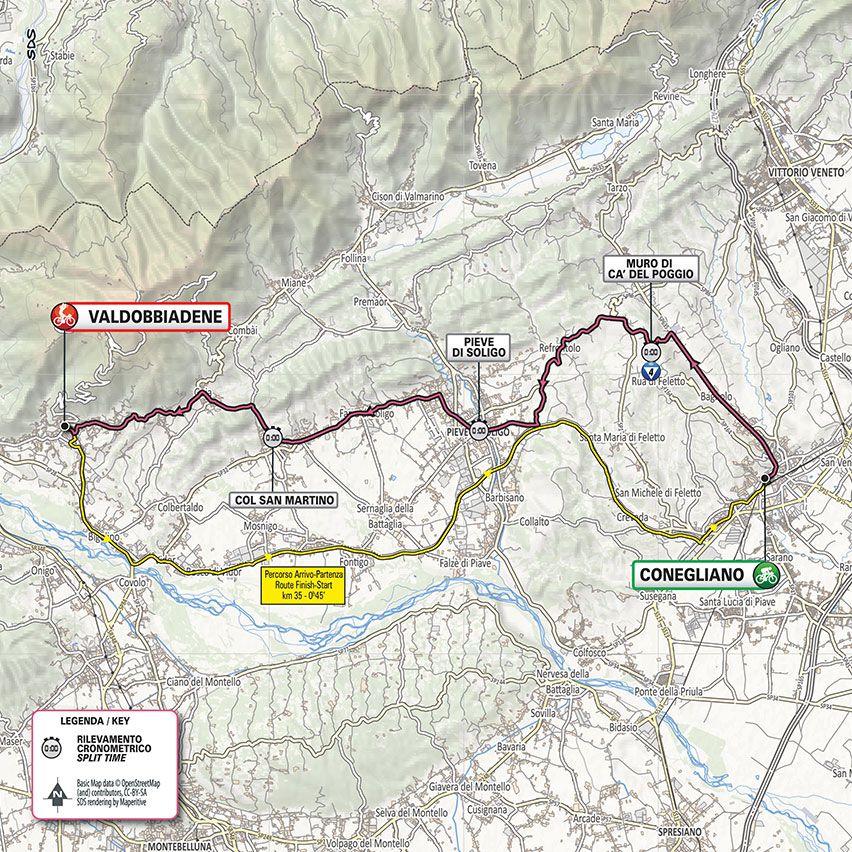 The start will be in Conegliano, where the Tour of Italy has been a guest before. In 1977 Pierino Gavazzi won a stage here, 25 years later Mario Cipollini in his striking Acqua e Sapone outfit recorded his fourth victory in the 2002 Giro and in 2011 took the mountain stage from here to Val di Fassa. It was won by Igor Anton at the time, while Alberto Contador defended pink with gusto in the mountains.

The riders will then be given a challenging 34.1 kilometer course between the vineyards. The first six kilometers are still flat, but then the first climb begins. The Muro di Cà del Poggio (1.1 km at 12.3%, max. 19%) is undoubtedly felt in the legs. The sign at the base indicates a slope of fifteen percent, but according to the road book, some parts go up to even nineteen percent!

This wall at San Pietro di Feletto has been part of a three-city link with the Wall of Geraardsbergen and the climb of Mûr-de-Bretagne since 2017 to promote joint actions. Once at the top after 7.4 kilometers, the first intermediate times are set. Mountain points are available for the three riders who climb the climb the fastest. When the climb is over, the route keeps going up and down.

Via Refrontolo the course then leads to Pieve di Soligo, where the second time measurement will be taken after 17.1 kilometers. Soligo and Farra di Soligo are on the route. That second place has a history in cyclocross, because in the winter of 1968 Renato Longo defeated Rolf Wolfshol and world champion Erik De Vlaeminck in the final sprint. In Col San Martin, after 25.1 kilometers, the third time measurement will be recorded.

After this measuring point, the riders climb to the highest point of this chrono test, at San Pietro di Barbozza. This is followed by a fast, treacherous descent to four hundred meters from the line. With 750 meters to go, the route makes a sharp turn to the left and then goes to the right in the last 500 meters. Then a right-angled bend follows, after which the last straight line is started. It is still cleverly rising, to 5.5 percent.

Naturally, all eyes will be on the rainbow jersey on Saturday. Filippo Ganna this Giro d’Italia showed all its class in the opening time trial to Palermo and on the fifth day he managed to win a glorified mountain stage in Camigliatello Silano with his 82 kilograms. Nothing stands in the way of the wearer of the rainbow jersey a third stage victory. The rolling trail seems to be made for him.

The route on the way to Valdobbiadene is slightly more difficult than the World Cup route around the Imola circuit. Especially on the Muro di Cà del Poggio, Ganna will lose some time compared to the smaller, lighter riders, but there are plenty of flat areas for the Italian to turn on his jet engine. And then see to stop him again.

Rohan Dennis is also still part of the Giro peloton. We have seen very little the Australian specialist in action in this Giro so far. After the retirement of leader Geraint Thomas, it was mainly Ganna, Jonathan Castroviejo, Tao Geoghegan Hart and Ben Swift who showed themselves on behalf of the British formation. And on Thursday, Jhonatan Narváez managed to win the stage to Cesenatico. INEOS Grenadiers is therefore in the winning mood.

What can Dennis do in this difficult time trial? His level of form does not seem like you-of-it, but based on his track record he remains a dangerous customer. The 2018 and 2019 time trial world champion has also shown in the past that he can focus well on a specific day. Put Dennis in the favorites anyway.

A formidable competitor to the INEOS Grenadiers time trialists Victor Campenaerts. This Giro is very active as the holder of the world hour record. He has been in the breakout of the day several times and also showed that he can accept a servant role for NTT leader Domenico Pozzovivo. Campenaerts will also want to achieve a good result in order to put himself in the spotlight with other teams, as the future of his team is highly uncertain.

Behind these three time trial specialists it seems to be a battle between the classification riders. The pink jersey is still in the hands of after thirteen days João Almeida. The young Portuguese from Deceuninck-Quick-Step has not yet shown any weaknesses, but it remains his bigger round debut. The only places he lost time on his closest competitor was on Mount Etna and on the steep finish in Roccaraso.

Until now, the battle between the favorites has been a seconds game. In this test it will probably be minutes against the clock. He proved in Palermo that Almeida has a good time trial. He came second behind Ganna. However, this time trial is structured differently and the question is how the Portuguese digest the hills. What we know for sure is that he is in top shape, and that is already an important link.

Almeida’s biggest competitor, this Giro, seems as yet Wilco Kelderman. The leader of Team Sunweb is also a strong time trialist by nature, which is an advantage for him compared to many competitors in the top of the rankings. In Palermo, Kelderman lost more than a minute to Almeida. “I felt very strong and I feel like I drove very well, but the wind has changed,” he said afterwards.

Kelderman is 40 seconds behind on the pink. On a good day, he can just take Almeida out of the leader’s jersey, because the course with the necessary climbs is ideal for the Dutch. But, it has been a long time since Kelderman rode a short result in a time trial. In 2017, when he finally finished fourth in the Vuelta, he finished second behind Chris Froome in a time trial of 40 kilometers. Kelderman was also in excellent shape then.

The surprising number three in the general classification is Pello Bilbao. The Spaniard from Bahrain McLaren initially started to go for stage victories, but after two weeks he is third at 49 seconds from Almeida. And, Bilbao is a very good time trialist. Just before the Tour de France, he captured the Spanish title against the clock and finished in the top 25 in all the time trials of 2020.

Bilbao finished fourth in the difficult time trial of the Ruta del Sol, in Paris-Nice he finished fifth and in the Tour he finished twelfth at La Planche des Belles Filles. His ‘worst’ result in a time trial was on the first day of this Giro. Then he finished 25th a minute from Ganna. He lost 37 seconds there on Almeida.

Mikkel Bjerg managed to finish third in the opening time trial. The 21-year-old Dane from UAE Emirates, three-time world time trial champion in the U23, makes a good impression in his first big round. In addition to the time trial in Palermo, he managed to achieve two more top-10 places in this Giro: he finished ninth in Vieste and from the flight he finished third in Roccaraso. Can he compete with Ganna, Dennis and Campenaerts?

The best UAE Emirates rider in the standings is Brandon McNulty, a 22-year-old American who, like Bjerg, makes his debut in a grand tour. McNulty is a former speed rider, he showed that in Tortoreto, when he missed the favorites group after a late attack and so took some time. In the standings he is just outside the top-10, but with a good time trial he can just sneak into that top-10.

From the other favorites at the top of the standings it seems Vincenzo Nibali to have the best papers. Nowhere has ‘the Shark of Messina’ been able to make a difference from the competition, but as always, Nibali gets better as the round goes on. The fact that the time trial has the necessary vertical meters is to the advantage of the Sicilian.

Jakob Fuglsang, Domenico Pozzovivo, Patrick Konrad, Jai Hindley and Rafal Majka will have to limit the damage. It speaks to their advantage that this time trial to Valdobbiadene is hilly, but we don’t give them a chance of the stage victory. We also look at the other riders who are still in the race with a special eye Alex Dowsett. The Brit, a time trialist by trade, already won the stage to Vieste from the flight.

The weather in the Veneto region, or at least in the starting place Conegliano and finishing place Valdobbiadene, is pleasant on Saturday. In Conegliano it is around 16 ° C all day, under a light cloud cover. There is hardly any wind. In the higher situated Valdobbiadene it is slightly cooler (13 ° C) and there is a light southerly wind. The riders will not see the sun, but it is expected to remain dry.

The time trial to Valdobbiadene can now be followed live on Eurosport 2 and through the Eurosport Player. The broadcasts, on TV and online, start just before the start of the first rider. Sporza and NOS do not have the broadcasting rights.

These were the details of the news Giro 2020: Preview hilly time trial to Valdobbiadene for this day. We hope that we have succeeded by giving you the full details and information. To follow all our news, you can subscribe to the alerts system or to one of our different systems to provide you with all that is new.