According to the EU, it is unlikely that the EU will... 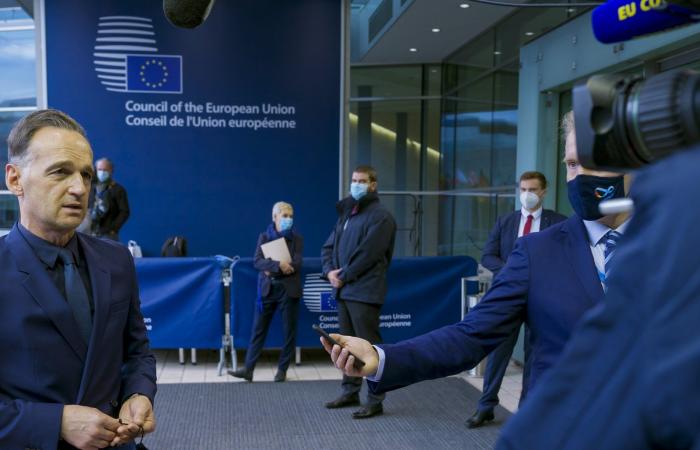 The European Union is unlikely to impose sanctions on Turkey at its summit from Thursday amid disputes over drilling activities and sea zones with Greece in the eastern Mediterranean, a German government source said.

At the two-day meeting of EU heads of state and government in Brussels, Greece asked to address the issue, the Reuters news agency announced on Wednesday in Berlin.

Germany does not expect the EU to change its stance on sanctions against Turkey just two weeks after the decision at the last summit not to impose any punitive measures until further notice.

On the possibility of bringing forward EU sanctions, Federal Foreign Minister Heiko Maas said on Thursday that the bloc would wait a week to decide how to react.

“It has happened twice that the discussions we expected did not take place and we do not know when they will take place,” he said. “We have to wait and see if there is any progress in a week and then we’ll see what position the EU has to take.”

“It is clear to us that Turkey is constantly carrying out provocative acts that are unacceptable,” said French Foreign Minister Jean-Yves Le Drian at a press conference together with his German and Polish colleagues.

He said the ball was in Ankara’s court but the EU was ready to change the balance of power if Turkey did not return to dialogue.

Earlier this week, Greek Prime Minister Kyriakos Mitsotakis said he would put the Eastern Mediterranean crisis with Turkey on the agenda of the EU Council meeting, scheduled for October 15-16, as Ankara would have consequences if it does not stops. “Provocations. ”

Mitsotakis was referring to a new telex (Navtex) from Turkey that said the Turkish seismic reconnaissance ship Oruç Reis would conduct activities in the eastern Mediterranean south of Kastellorizo ​​island (Megisti-Meis) until October 22nd.

He discussed developments on the phone with the President of the European Council, Charles Michel, and said he would bring them up at the next Council meeting, October 15-16.

“This new unilateral act is a serious escalation on the part of Turkey,” a government statement quoted by Mitsotaki.

Turkey announced last month that it would be pulling the oruc rice ashore for maintenance and supply and said the move would “give diplomacy a chance”.

“We expect Greece to withdraw its maximalist claims contrary to international law … to end its exercises and military activities, which are increasing tensions in the Aegean and the Mediterranean, and to enter into a sincere dialogue with us. Said the Turkish Foreign Ministry.

Fahrettin Altun, Director of Communications for the Turkish President, tweeted while Ankara was in favor of the dialogue that “there can be no negotiations when you say:” What is mine is mine and what is yours is negotiable. ”

Ankara and Athens agreed earlier this month, under the auspices of NATO, to put in place a system to prevent potential military conflicts and accidents, including a hotline. The two countries had also agreed to resume the so-called exploratory talks to build trust and resolve disputes that were last seen in 2016.

The Turkish Foreign Ministry accused Greece of “dishonesty” for continuing to take measures to create tension and at the same time agreeing to enter into dialogue. A ministry statement accused Greece of declaring military exercises in the Aegean Sea on the occasion of Turkey’s national day celebrations on October 29. Turkey returned the favor by declaring exercises on October 28, a Greek national holiday.

The 27 EU heads of state and government met in Brussels on Thursday to discuss specific issues such as the COVID-19 pandemic and EU-UK relations in the post-Brexit period. The first part of the day is expected to focus on Brexit, while environmental and climate issues will be discussed later in the day. On the second day, leaders will discuss foreign affairs, including issues such as the Eastern Mediterranean, Nagorno-Karabakh and Russia.

Before the meeting, the President of the European Commission left the summit of EU heads of state and government after one of her team members tested positive for the coronavirus.

“I was just informed that a member of my front office tested positive for COVID-19 this morning. I tested negative myself, ”said Ursula von der Leyen on Twitter.

“However, as a precaution, I am leaving the European Council immediately to self-isolate,” she added.

The heads of state and government met earlier this month to find ways to ease tensions between Turkey and block members Greece and the Greek Cypriot government.

At the last EU summit, Chancellor Angela Merkel once again insisted on a diplomatic solution to the conflict in the Eastern Mediterranean, while Berlin’s government spokesman said last week that Merkel was working on improving relations between the EU and Turkey after a video conference with President Recep Tayyip Erdoğan on to improve October 6th.

Greece, with France’s support, denied Turkey’s energy exploration and tried to box on Turkish sea areas based on small islands near the Turkish coast.

Turkey has sent drill ships to search for energy on its continental shelf. Turkey and the Turkish Republic of Northern Cyprus (TRNC) also have rights in the region.

In order to ease the tension, Turkey has called for a dialogue to ensure a fair distribution of the region’s resources.

These were the details of the news According to the EU, it is unlikely that the EU will... for this day. We hope that we have succeeded by giving you the full details and information. To follow all our news, you can subscribe to the alerts system or to one of our different systems to provide you with all that is new.