No, neither Kamala Harris said churches were “propaganda centers” nor did... 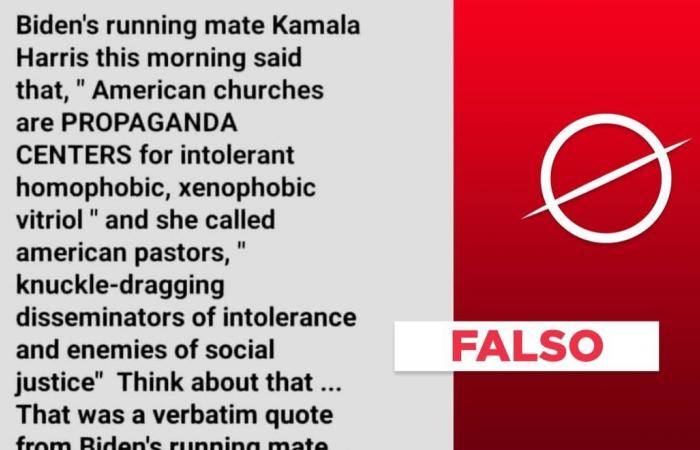 In the framework of the 2020 elections in the United States, social networks have been flooded with disinformation about political candidates. For example, last week the version circulated that the Democrats Joe Biden Y Kamala Harris they were in favor of abortion until “five minutes before” the fetus was born, which is incorrect.

In that sense, the post titled “Christians have to pay attention” also attributed false statements to Kamala Harris, Democratic candidate for the vice presidency of the United States, and misrepresented others of Joe Biden, presidential candidate of the same party.

“Kamala Harris, Biden’s partner, said this morning that ‘American churches are centers of propaganda for a homophobic, xenophobic intolerant’ and called on American pastors: disseminators of intolerance and enemies of social justice,” the post said. “On the same Monday, Biden said that ‘those who hold traditional views and intolerant Christian beliefs are the waste of society,'” he added.

A first search on Twitter the term “propaganda centers” did not yield any results involving Kamala Harris. We also did not find that phrase on his Twitter profile. The oldest post we found on Facebook with the Who Posted What? corresponds to October 7 and is from a private account. In Google, no statements are collected from the Democratic candidate before that date. That is, there is no evidence that he claimed that.

The Associated Press agency also found no records of Harris’s alleged statements in the media. In addition, a spokesperson for Kamala Harris’ office in the Senate ruled out that she had made such a claim. The same was reported by FactCheck and PolitiFact.

The second part of the post accused the Democratic presidential candidate of having insulted Christians. “Biden himself said Monday that those with traditional views and intolerant Christian beliefs are despicable,” the Oct. 11 post said.

Those statements were not about Christians, but about followers of the Ku Klux Klan. They are not recent either.

On September 15, 2018, Joe Biden delivered a speech at the Walter E. Washington Convention Center in Washington for the annual dinner for a Human Rights Campaign, according to Snopes.

“We are up against an administration, and some of its most ardent right-wing supporters of the Ku Klux Klan – the head of the Ku Klux Klan has backed (Trump) – and the far right,” he began. “[…] This time, they, not you, have an ally in the White House. This time they have an ally. They are a small percentage of the American people. Virulent people. Some of them, the scum of society ”.

Joe Biden said the right-wing Ku Klux Klan supporters were Trump supporters and “scum,” but did not speak of Christians. Nor did he call all of the president’s supporters “despicable.”

There is no evidence from the statements of Kamala Harris on their social networks or in the media. On the other hand, Biden’s statements did not have the meaning attributed to him on social networks. Consequently, we qualify the post as false.

* If you want to know if a publication on social networks is true or false, you can ask La República to verify the information. Send your request to the section Contact or write to our WhatsApp (+51 997 883 271).

Subscribe here to the Verificador de La República newsletter and receive in your email the fact checking articles denying the false information that circulates on the internet.

These were the details of the news No, neither Kamala Harris said churches were “propaganda centers” nor did... for this day. We hope that we have succeeded by giving you the full details and information. To follow all our news, you can subscribe to the alerts system or to one of our different systems to provide you with all that is new.