golden retriever defends girl while she gets scolded by her mother;... 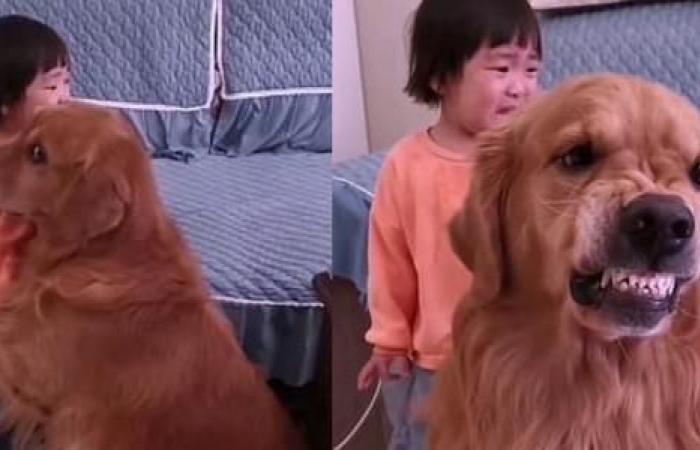 A video went viral in China in which You You, a 2-year-old girl, gets scolded by her mother and her faithful friend, an intelligent golden retriever, “protects” her from reprimand. The dog even wraps his paws around the little girl, as if hugging her. The child cries and he, in response, also shows his teeth, grimaces and even snarls at the adult woman.

The animal’s surprising reaction was captured by the maternal figure, identified as Mrs. Sun. She states that the footage is not edited and shows the true reactions of the dog and her daughter.

According to the British website Daily Mail, the owner found the scene “funny” and “irritating at the same time”.

That’s because she had just bought a jar of face cream for her daughter and left it in the living room while she was preparing lunch.

However, upon returning, the woman noticed that the girl had torn the product packaging while playing. Half of the newly purchased cream ended up being wasted.

While yelling at the child for spoiling the cream, what the mother did not expect was that the pet would be so defensive.

The animal became even more protective when Ms. Sun asked the dog to stop defending the child. “You get up. Stop protecting her,” says the mother, in the video.

The dog, curiously, is called Harry Potter – the same name as the protagonist of JK Rowling’s iconic book saga. The character is from the Gryffindor house, known for having members of great courage and bravery.

Not by chance, the furry’s bravery is frequent: according to Mrs. Sun, whenever someone speaks to You You in a harsh tone, the dog approaches and tries to protect her. This time, it wouldn’t have been different and the attitude even softened the woman’s heart.

“I was still upset, but I also found it very funny,” said the mother. “It was very exciting. Dogs always find ways to express their love as long as you treat them properly.”

These were the details of the news golden retriever defends girl while she gets scolded by her mother;... for this day. We hope that we have succeeded by giving you the full details and information. To follow all our news, you can subscribe to the alerts system or to one of our different systems to provide you with all that is new.

PREV Global economic impact of Russian invasion of Ukraine to be felt for years: WEF panel
NEXT 25 persons emerge from shell-pounded steel complex in Mariupol