Stern dies from “spaghettification” as it is consumed by supermassive black... 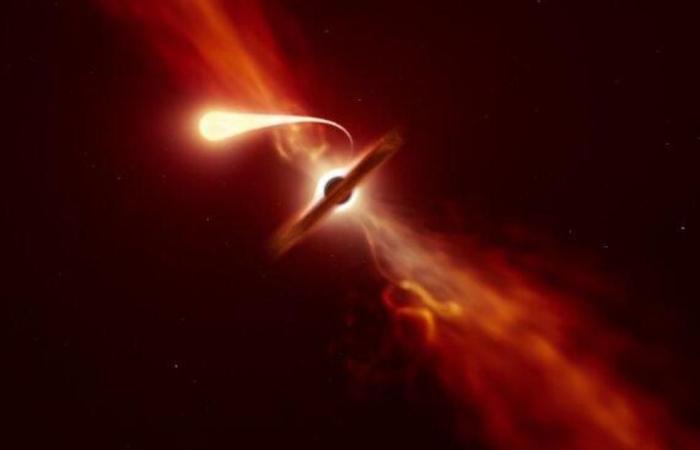 Astronomers have seen an extremely rare event: the end of a star’s life as it is extinguished by a supermassive black hole. And the collapse of this star was even more unique because it “spaghettified” to death – and no, this is not science fiction.

According to a new study in the Royal Astronomical Society’s Monthly Notices, astronomers at the Zwicky Transient Facility discovered a burst of light known as the tidal disruption event, which indicated the star’s death in September 2019. Researchers said this week that it was the closest such phenomenon has come to Earth, occurring just over 215 million light years away.

“The idea that a black hole” sucks in a nearby star “sounds like science fiction. But that’s exactly what happens in a tidal disruption event, ”said lead author Matt Nicholl of the University of Birmingham in the UK

With the help of telescopes from the European Southern Observatory (ESO), scientists have been able to study in unprecedented detail what happens when a star is devoured by one “Monster” black hole. They said the star was roughly the same mass as the Sun, about half of which was lost to the black hole, which is over a million times larger. The other half was simultaneously ejected outward into space.

During this violent spaghettification process, the long, thin strands of material that make up the star collapse into the intense gravity of a black hole – which it basically swallows like star spaghetti. The event releases a bright burst of energy that can be captured by astronomers.

“When an unfortunate star wanders too close to a supermassive black hole in the center of a galaxy, the extreme gravitational pull of the black hole shreds the star into thin streams of material,” said co-author Thomas Wevers, an ESO Fellow in Santiago, Chile.

In the past, these torches were often obscured by the explosion of dust and dirt, making them difficult to investigate. But this time the astronomers were lucky.

This tidal disruption event, named AT2019qiz, was found immediately after the event occurred, which makes observation a lot easier. Researchers studied AT2019qiz, located in a spiral galaxy in the constellation Eridanus, for six months as the torch kept getting brighter before it faded.

“Knowing it early on, we could actually see the curtain of dust and debris pull together as the black hole triggered a heavy flow of material at speeds of up to 10,000 km / s,” said Kate Alexander, a NASA researcher. Einstein Fellow at Northwestern University.

“This unique look behind the scenes provided the first opportunity to locate the origin of the opaque material and to follow in real time as it devours the black hole.”

Astronomers said their observations first showed the direct link between the star’s dust and debris and the bright flare that occurs when it is engulfed by the black hole. They hope that AT2019qiz can serve as the “Rosetta Stone” to interpret future interpretations of tidal disturbances and to deepen our understanding of the mysterious world of black holes.

These were the details of the news Stern dies from “spaghettification” as it is consumed by supermassive black... for this day. We hope that we have succeeded by giving you the full details and information. To follow all our news, you can subscribe to the alerts system or to one of our different systems to provide you with all that is new.