Karabakh .. Putin expresses his concerns to Erdogan, and Azerbaijan warns... 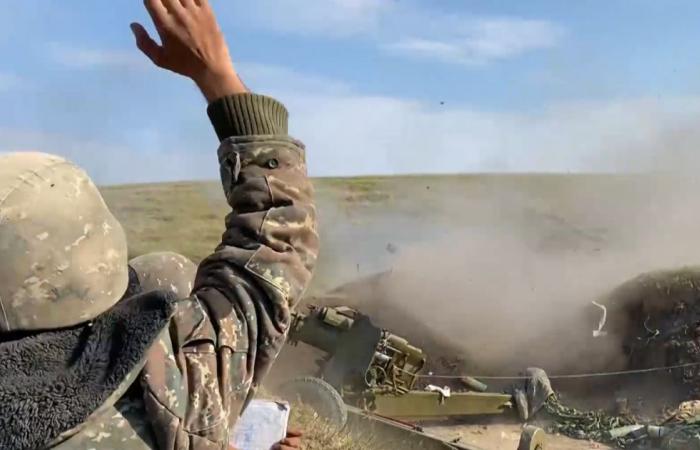 Russian President Vladimir Putin discussed with his Turkish counterpart Recep Tayyip Erdogan in a phone call the developments of the conflict in the Nagorno Karabakh region, while the Armenian Prime Minister described the situation in the region as very difficult.

The Kremlin said in a statement that Putin and Erdogan agreed on Wednesday – in the first telephone conversation between them since the outbreak of fighting between Azerbaijani and Armenian forces in Karabakh at the end of last September – on “the urgent need for joint efforts to end the bloodshed as soon as possible.”

He added that the two presidents reaffirmed the importance of the ceasefire brokered by Moscow.

The Kremlin stated that Putin had expressed to his Turkish counterpart his concern about the participation of fighters from the Middle East in the Karabakh battles, he said.

A statement issued by Erdogan’s office said that the Turkish President informed Putin in the phone call of Ankara’s desire for a permanent solution to the conflict in Karabakh.

The statement indicated that the two presidents also discussed the situation in Syria and Libya.

Erdogan had said earlier in the day that his country did not send Syrian fighters to Azerbaijan, as some reports have indicated, but it fully supports its ally Baku.

The Turkish President – in a speech to the deputies of the ruling Justice and Development Party in Parliament – called on the Minsk group not to procrastinate in solving the Karabakh problem, and to end the negotiations to return the occupied lands to Azerbaijan.

Meanwhile, fighting continues in the region and its surroundings, despite the truce announced a few days ago.

The Azerbaijani President Ilham Aliyev confirmed in an interview with a Turkish channel that his country’s army is advancing in more than one axis in the region, and that it will liberate the lands of Azerbaijan.

Aliyev said that the military operations in Nagorny Karabakh will continue until the region is fully restored, but he called on the Armenian population in the region not to feel anxious.

Aliyev promised Armenia that it would pay a heavy price if it attacked the Azeri gas and oil pipelines.

Later, the Azerbaijani president announced via Twitter that his country’s army had recovered 8 additional villages from the Armenian occupation, which are Qaradagli, Khatun Bulak, and Qarah Kullu of Fuzuli state, in addition to Bolotan, Malik Janli, Kemer Türk, Tekke and Tagsir in Khojawand state.

On the other hand, Armenian Prime Minister Nikol Pashinyan said that Azerbaijan seeks to fully occupy the Karabakh region, stressing that the situation in the conflict zone is very difficult.

Pashinyan added that Azerbaijan and Turkey will not stop what he described as aggression.

The Armenian Ministry of Defense said that the Azerbaijani forces bombed this morning Armenian military equipment on the northern border with Karabakh province and a military target off the Kavachar region.

The Armenian Ministry of Defense stressed that it reserves the right to respond to any Azerbaijani military facility inside Azerbaijan.

The Ministry of Defense in the unrecognized Armenian authority in the region said today that it recorded 23 deaths, which raises the death toll in its ranks to 555 since the start of the battles with the Azerbaijani forces on 27 September.

A proposal to publish monitors

On the other hand, Russia suggested deploying Russian military observers, and called for the beginning of resolving the dispute through diplomatic means.

Russian Foreign Minister Sergey Lavrov said that it is better to deploy Russian military observers on the front line in Nagorny Karabakh, but the decision is up to Armenia and Azerbaijan.

He stressed that his country does not agree with the Turkish position that there is likely to be a military solution to the conflict over Karabakh, and that it has informed Baku and Yerevan of the need to hold meetings between the military to set up mechanisms to verify the ceasefire in the region.

These were the details of the news Karabakh .. Putin expresses his concerns to Erdogan, and Azerbaijan warns... for this day. We hope that we have succeeded by giving you the full details and information. To follow all our news, you can subscribe to the alerts system or to one of our different systems to provide you with all that is new.