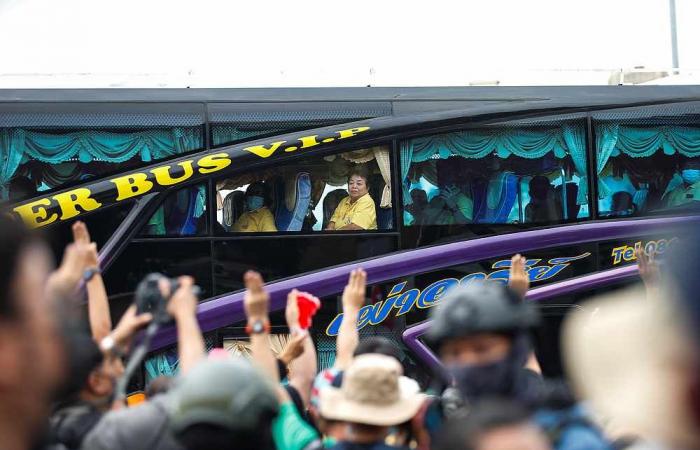 BANGKOK, Oct 14 — Thai anti-government protesters hurriedly brought forward a demonstration in Bangkok today, saying they feared confrontation with royalist groups planning to assemble nearby in support of the king.

Three months of protests demanding a new constitution and the departure of Prime Minister Prayuth Chan-ocha — a former junta leader — have largely been peaceful, although demonstrators scuffled with police yesterday and 21 activists were arrested.

Protesters have also sought to curb the powers of King Maha Vajiralongkorn and in a rare direct challenge, chanted “release our friends” at his passing motorcade yesterday.

A couple of hundred protesters began assembling from 8am (0100 GMT) at Bangkok's Democracy Monument on the anniversary of a 1973 uprising that brought down the then military government. The protest had originally been scheduled for six hours later.

“We are having the protest earlier because they are getting supporters to receive the royal motorcade to start a conflict with us,” protest leader and human rights lawyer Arnon Nampa told protesters. “We are holding this protest peacefully.”

The government made no immediate comment, but has said people have the right to protest. The Palace has repeatedly declined to comment on the protests or the demands of protesters.

Pro-royalist groups said they planned gatherings near the anti-government protest, raising fears of trouble in a country roiled by a decade of street violence between supporters and opponents of the establishment before a 2014 coup.

So far pro-royalist demonstrations have been small, compared to the tens of thousands who joined the biggest anti-government demonstration in September.

“We are here to fight for democracy,” said Romtum Cheyhert, 63, who joined the anti-government protest from the northern city of Chiang Mai.

Among protesters' demands are for curbs on the constitutional powers of the king and for him to transfer back the personal control he took of some army units and a palace fortune valued in the tens of billions of dollars.

Royalist politician Warong Dechgitvigrom condemned the protesters in a Facebook post today and called on the government to prosecute those he accused of intending to destroy the monarchy. — Reuters

These were the details of the news Thai protest brought forward over disruption fears for this day. We hope that we have succeeded by giving you the full details and information. To follow all our news, you can subscribe to the alerts system or to one of our different systems to provide you with all that is new.