Days after the no-fly zone over it … the Ethiopian Prime... 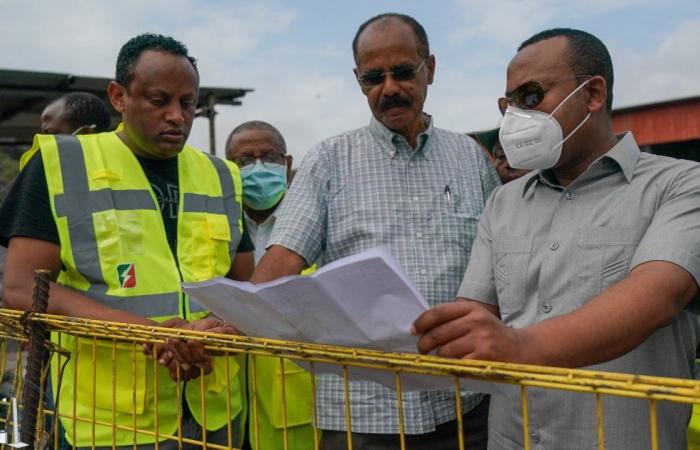 Ethiopian Prime Minister Abiy Ahmed visited the Renaissance Dam today, Tuesday, accompanied by Eritrean President Isaias Afwerki, and said that the dam will hold more than 3 times the water, in the second phase of filling it.

This is the first time that a foreign president visits the Renaissance Dam that Ethiopia built on the Blue Nile, the main tributary of the Nile, and it is also the first visit by the Ethiopian Prime Minister since the first phase of filling the dam last July.

Ethiopian TV broadcast clips of the visit, where the Prime Minister expressed his satisfaction with the progress of work on the project, and praised the efforts of everyone who participated in the construction of the dam and contributed to its support. Earlier, Ahmed and Afruqi visited the Quisha Dam in the Shoub region of southern Ethiopia.

The Renaissance Dam project has caused tension in the Nile Basin region since Ethiopia began building it in 2011.

Ethiopia believes that the Renaissance Dam is necessary to achieve its development and double its production of electricity, while Egypt considers it a vital threat to it, as the Nile River is a source of more than 95% of the irrigation and drinking water in the country, and Sudan fears potential risks of the project to the dams in its lands.

Despite the objections of Egypt and Sudan, Ethiopia announced on July 21 that it had completed the first phase of filling the dam’s reservoir, amounting to 4.9 billion cubic meters, which allows testing the first two turbines in the dam.

Recently, the commander of the Ethiopian Air Force, Lieutenant General Yilma Merdasa, announced that his country is fully prepared to confront any attack on the Renaissance Dam, and that the air force provides 24-hour special protection for the airspace of the Renaissance Dam.

The country declared a no-fly zone over the dam site, as the Civil Aviation Authority said that flying over the restricted area would be permitted, except for those with special permission from the Air Force and other relevant government bodies.

These were the details of the news Days after the no-fly zone over it … the Ethiopian Prime... for this day. We hope that we have succeeded by giving you the full details and information. To follow all our news, you can subscribe to the alerts system or to one of our different systems to provide you with all that is new.