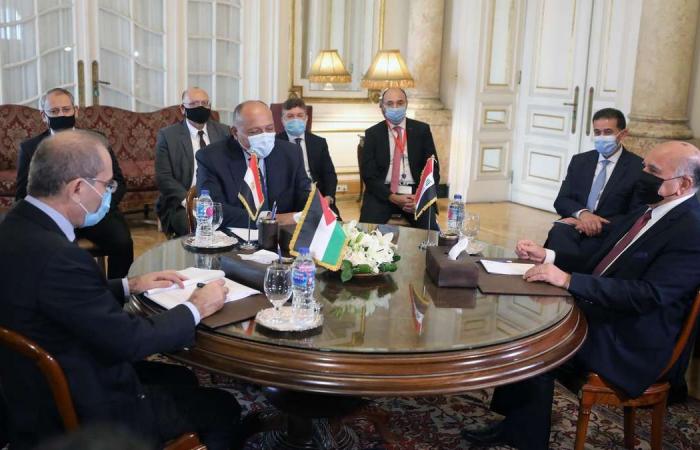 Thank you for your reading and interest in the news Iraq, Jordan and Egypt in talks on reviving oil pipeline project and now with details

“This is a vital and strategic issue that benefits the three countries positively. Ground has been covered towards activating it,” Mr Al Safadi told a news conference in Cairo after a meeting with his Egyptian and Iraqi counterparts.

Jordan and Iraq signed an agreement in 2013 to build the pipeline from Basra to Aqaba, passing through Jordan’s only refinery in Zarqa near Amman.

The proposed pipeline had an initial capacity of 150,000 barrels per day and had a cost of $18 billion. It was due for completion in 2017 but the project was not realised.

The two countries revived the project this year, as diplomatic relations between them improved, and the pipeline scheme was expanded to include Egypt.

Iraqi prime minister Mustafa Al Kadhimi, who is supported by the United States, started a rapprochement with Sunni Arab states as soon as he took office in May this year, making it clear he wants to carve a foreign policy outside the sway of Iran.

He immediately took steps to mend ties with Arab states annoyed at the Baghdad government’s perceived subjection to Tehran.

Mr Al Kadhimi sent his most trusted confidant in the cabinet, Finance Minister Ali Allawi, to Saudi Arabia and Kuwait in May. He signalled to Amman the possibility of importing electricity from Jordan, which could lessen Iraq's reliance on gas supplies from Iran.

Although Jordan was a base for US planes that took part in the American-led invasion that toppled Saddam Hussein in 2003, relations between Amman and Baghdad have been volatile. In 2004, Jordan's King Abdullah warned that Tehran was building a "Shiite crescent" across the Levant, putting Baghdad, Damascus and Beirut under the tutelage of Iran's clerical rulers.

Unlike Egypt and Jordan, which import most of their oil needs, Iraq is one of the top five exporting members of Opec.

Mr Al Safadi said the three countries are seeking “integration, whether in the energy, construction, pharmaceuticals sectors, or in food security”.

“We will be creating the political horizon and it will be the private sector in our three countries and in the region that will start working on many of these projects,” Mr Al Safadi said.

These were the details of the news Iraq, Jordan and Egypt in talks on reviving oil pipeline project for this day. We hope that we have succeeded by giving you the full details and information. To follow all our news, you can subscribe to the alerts system or to one of our different systems to provide you with all that is new.