Displaced Syrians waiting to return to their homes in “Peace Spring” 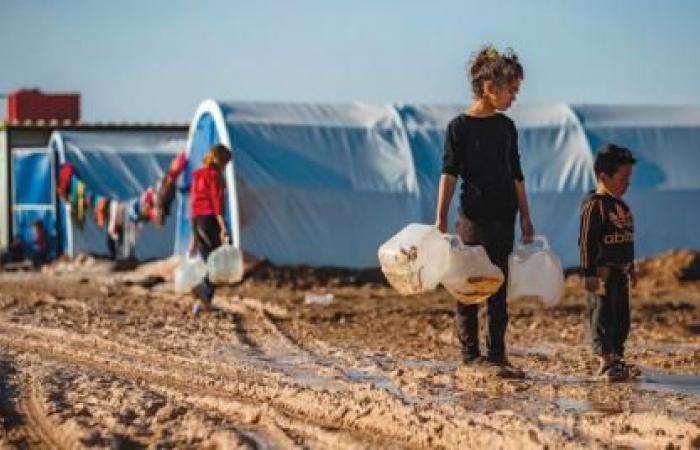 Inside a camp teeming with displaced people near the city of Hasaka in northeastern Syria, Berivan was born five months ago, without her two sisters having the warmth of their home in Ras al-Ain, from which her family fled a year ago due to a massive Turkish attack on the “Peace Spring” area, according to what came In a report by the French Press Agency from Al-Hasakah yesterday.

“My daughter, Berivan, was born months ago in the camp. She did not see a house, but a tent,” her mother, Wadha Shermukh (29 years), said from their tent in Washoe Kani camp, which includes displaced Kurds and Arabs from the Ras al-Ain area. “What would life be like for a child who was born and raised in a tent?”

The Shermukh family is one of tens of thousands who fled their homes, following a massive attack launched by Turkey with pro-Syrian factions in October. The attack ended weeks later, with US mediation and an agreement with Russia, after Turkey took control of a 120-kilometer border area extending between Ras al-Ain (north of Hasaka) and Tal Abyad (north of Raqqa).

Although a large number of the displaced have returned to the predominantly Arab region, others are still suffering in displacement camps, either because they lost their property, or because of fear for several reasons.

Displaced Kurds from the region and human rights organizations accuse the pro-Ankara fighters of committing acts of looting, theft, confiscating homes and carrying out executions, similar to what happened in the Kurdish region of Afrin in 2018 after they controlled it.

Despite being Arab, the Wadha family is worried about returning to Ras al-Ain, for fear of accusing her husband of “dealing with the Kurds” during the years of their control over the border area, not to mention the destruction of their home. “I try to forget, but how can a person forget his home and his life’s effort?” She says.

Perhaps the hardest thing that Waddah goes through is seeing her three daughters, including Roslyn, who suffers from paralysis in her legs, growing up in a tent, and she has tried as hard as possible to make her more like a home. So in one corner I placed kitchen utensils and made a second place to sit and a third place to sleep.

“The future seems black (…) I always think about the future of my daughters if the situation remains the same, and what they will feel if they get out of here and see how people live outside,” she explains. She is particularly concerned about the future of Rosslyn, who is in her wheelchair. She takes her daily to school, fearing that her daughters will not learn “like the daughters of their generation.”

In a nearby tent, the Kurdish woman Shamsa Abdul Qadir, 40, a mother of seven, says she does not imagine herself living the rest of her life in the camp. And she adds in Kurdish, “We are thinking day and night about returning to our homes in Ras al-Ain. I would rather die in my town than live in this camp … It is more like a grave.” However, at the same time, it fears returning to live under the control of the Turkish forces and their affiliated factions, describing them as “mercenaries.” “They are our enemies,” she said. “They kill people, kidnap women, and steal our homes, and no one is stopping them.”

Last month, the United Nations High Commissioner for Human Rights warned of the increasing level of violence and crime in the areas controlled by the Turkish forces, and of the possibility that the pro-Ankara factions would commit “war crimes.” She said she documented a “disturbing pattern of grave abuse” with increasing killings, kidnappings, property confiscations and forced evictions. She pointed out that the factions have seized homes, lands, and properties and looted them without any apparent military necessity.

The National Coalition for Syrian Revolutionary and Opposition Forces supported by Ankara, which is the most prominent component of the opposition, demanded that it be informed of the “alleged cases” in the Afrin and Ras al-Ain regions to refer them to the judiciary, considering that they may be “just individual and non-systematic actions.”

Salima Muhammad, 42, gave up the idea of ​​returning to Ras al-Ain, where her home was destroyed. She began making preparations to build a kitchen separate from her overcrowded 14-member family tent. “Our village has burned … even if we have hope of returning, where will we go?” She says. There are no longer homes, or walls, or even doors and windows. ” “What does the future mean if we are not among our people and on our land?” She asks heartily, but reports of kidnappings and abuses prevent the return.

Gamrah, 65, who was displaced from the countryside of Ras al-Ain, shares the same concerns. In the tent where her grandchildren surrounded her, Gamrah took a key out of a small bag. “I brought the key to my house,” she says. “If I die before I return, I want them to bury this key with me,” she added.

These were the details of the news Displaced Syrians waiting to return to their homes in “Peace Spring” for this day. We hope that we have succeeded by giving you the full details and information. To follow all our news, you can subscribe to the alerts system or to one of our different systems to provide you with all that is new.