Trump: President wanted to pose as Superman when he returned to... 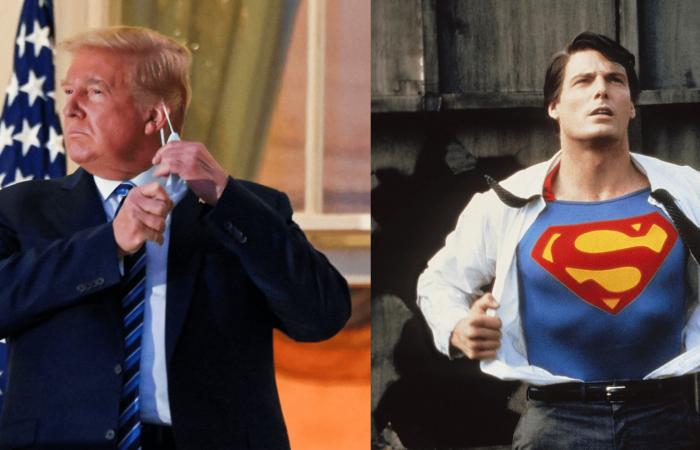 ONE New York Times Donald Trump reportedly wanted to pose as Superman when he returned from the White House hospital.

Trump’s short-lived stint at Walter Reed Medical Center in Maryland, where he was being treated for coronavirus, ended Monday when he made a dramatic helicopter return to Washington DC and, despite everything, removed his mask with no evidence yet that he was Covid-19 has hit.

According to the report, Trump wanted to do something similar to Gene Wilder’s first scene as Willy Wonka in the classic film, in which he first poses as a frail old man before being launched into acrobatics. Those familiar with the phone calls about Trump’s return said he wanted to do something similar, but instead of the acrobatics, he would tear off his white shirt to reveal a blue Superman underneath, much like Clark Kent would do when he wanted transform into the DC superhero.

The report by Maggie Haberman and Annie Karni says:

In multiple phone calls last weekend from the presidential suite at Walter Reed National Military Medical Center, Mr. Trump shared an idea he was pondering: When he left the hospital, he initially wanted to appear frail when people saw him, people said Knowledge of the conversations. But under his button-down shirt, he wore a Superman T-shirt, which he revealed as a symbol of strength when he tore open the top layer. He didn’t end up doing the stunt.

While it would have made quite a spectacle, Trump didn’t go down that route and instead just removed his mask, which sparked controversy and outrage, but the Superman stunt would arguably have generated more attention and headlines.

Though he didn’t, people were equally disgusted to think he tried and disappointed that he hadn’t gone through it after all.

J. Michael Straczynski, a writer who worked on Superman comics, suggested that Trump mistook the hero for one of the Man of Steel’s villains, the tyrannical General Zod.

Other Superman villains Trump could be compared to are Parasite, Bizarro, Mongul, Doomsday, Ultraman … we could go on.

Dean Cain, a conservative actor who played Superman on television in the 1990s, thought it was “unforgettable.”

Trump was back on the Truman Balcony of the White House speaking to around 2,000 black and Latin American supporters, many of whom wore blue Trump t-shirts. Trump seemed to be nodding to him, preferring the blue Superman t-shirt over a white shirt in his speech, saying:

I want to wear one of them instead of a white shirt.

These were the details of the news Trump: President wanted to pose as Superman when he returned to... for this day. We hope that we have succeeded by giving you the full details and information. To follow all our news, you can subscribe to the alerts system or to one of our different systems to provide you with all that is new.

PREV Two dead after undercover cops shoot at each other in Philippines drug bust
NEXT Presidents of Mexico and Argentina want the G20 to declare vaccines...