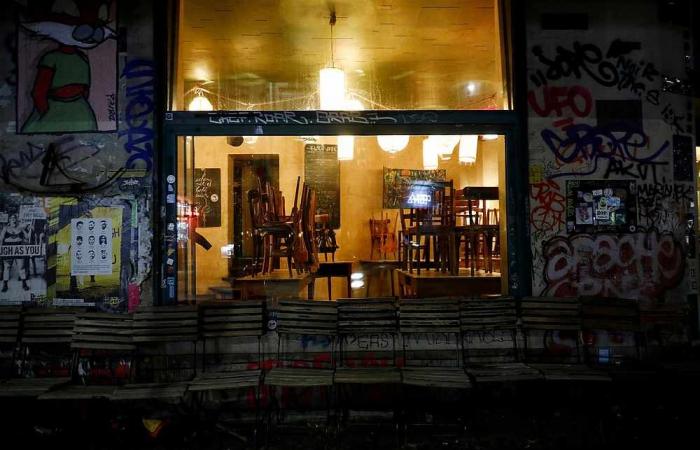 BERLIN, Oct 11 — A coronavirus curfew closed doors early on German capital Berlin's legendary nightlife yesterday in a bid to limit surging infections, while in Latin America and the Carribean the number of cases passed 10 million.

Bars and restaurants closed at 11pm (2100 GMT) in Berlin under a partial curfew announced until October 31, with the capital following in the footsteps of financial hub Frankfurt where a curfew had already been imposed, but starting an hour earlier.

With more than 400 new cases daily in Berlin, the 11 pm shutdown also covers all shops except pharmacies and petrol stations in a bid to prevent sales of alcohol late at night.

“This is not the time to party,” said Berlin mayor Michael Muller in a message addressed to young people, who are driving new infections higher. “We can and we want to prevent another more severe confinement.”

Chancellor Angela Merkel had already warned Friday that high-infection areas would be given 10 days to bring down cases or face tougher action, calling big cities the “arena” to keep the pandemic under control.

Governments across the globe are struggling to keep up with a sharp rise in infections and manage growing public frustration over a new restrictions as the pandemic enters a second wave.

Since it emerged in China late last year, the virus has killed more than one million worldwide, infected nearly 37 million and forced millions more out of work as the pandemic batters the global economy.

Latin America and the Caribbean marked 10 million cases yesterday and with more than 360,000 deaths, the region is the worst hit in terms of fatalities, according to official figures.

Brazil's virus death toll passed 150,000 people on Saturday, according to health ministry figures, although the rate of new coronavirus infections continues to slow in the South American country.

Spiralling cases in France have led to fears that the government may need to impose local lockdowns in major cities, which are the epicentres of the diseases, which would mimic measures already announced in Spain where the government has prevented people leaving the Madrid region.

Residents can only leave the Spanish capital for work, school or medical reasons as part of restrictions that have been denounced by the city's right-wing authorities.

“We've always placed public health above all other considerations,” Prime Minister Pedro Sanchez said during a visit to Portugal on Saturday, adding that Madrid needed “a strong response” to rising cases.

In Poland, authorities told people to wear face masks in all public spaces after coronavirus cases hit a new record daily high of 4,280.

To the south, the Czech Republic faced the prospect of a new lockdown as the growth in Covid-19 cases set a fourth straight daily record, with the growth in infections the highest in Europe.

EU Commissioner Mariya Gabriel was the latest high-profile figure to test positive for Covid-19. She announced the news yesterday, the first top Brussels official known to have caught the coronavirus.

British cyclist Simon Yates pulled out of the Giro d'Italia after he tested positive.

British Prime Minister Boris Johnson, who himself spent time in hospital for the virus in April, is to outline a new three-tier lockdown system tomorrow.

But as with the Berlin march, new restrictions have often run into opposition as public frustration grows over curbs on social life, mask requirements and business shutdowns.

Local leaders bristled at London's plans, with Manchester mayor Andy Burnham saying that “we will not surrender our residents to hardship this Christmas or our businesses to failure.”

In Rome, hundreds of people gathered for two separate marches against mask-wearing orders, one organised by a far-right group, the other bringing together conspiracy theorists, “anti-vaxxers” and other protesters.

“Of course there is a virus, but from a political and philosophical point of view, they are just exaggerating,” Giulio Lessi, a Rome protester, said of the government measures.

In the United States, President Donald Trump rallied hundreds of cheering supporters for a campaign-style comeback event at the White House on Saturday, jumping back into the race nine days after being stopped in his tracks by Covid-19.

“I am feeling great!” Trump declared as he stepped out to a White House balcony — tugging off his mask to address the crowd below, most of them masked under their red “MAGA” hats, but with little social distancing.

Trump's doctor issued a statement saying he was fit for a “safe return to public engagement” from yesterday.

His appearance set the stage for a full-fledged campaign rally Monday in Florida — followed immediately by two more in battleground Pennsylvania Tuesday and Iowa Wednesday. — AFP

These were the details of the news Berlin nightlife shuts early as virus cases spike in Europe for this day. We hope that we have succeeded by giving you the full details and information. To follow all our news, you can subscribe to the alerts system or to one of our different systems to provide you with all that is new.