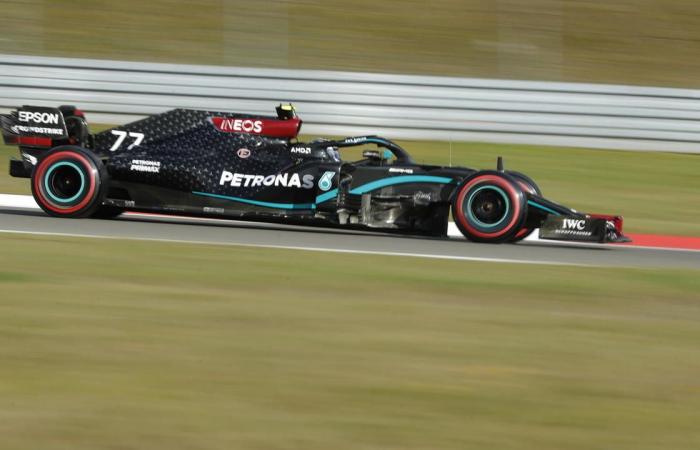 Bottas led the official tests on Saturday, achieving the fastest lap with a time (1: 25,269d), with a difference of 256 thousandths of a second for Hamilton and 293 thousandth of a second for Red Bull driver Max Verstappen.

“It feels great to be successful on the last lap,” Bottas said after the formal trials.

The cold autumn weather was an obstacle to the free trials, which were canceled on Friday due to the fog.

“It was very difficult with the short trials and these conditions for choosing the tires well,” Bottas added. “That was the most prominent thing today.”

“I think I can win. This is the only goal for tomorrow, and we hope to get a good start.”

Sunday’s eleventh stage of the world championships, which is being held at the legendary Nurbogering for the first time in seven years, is expected to be intense and exciting.

Hamilton, six times champion of the year, most recently in the last three years, is looking on the one hand to equate Schumacher’s record with 91 races, and on the other hand to another record equation for the German driver and it is related to the number of world titles, especially after his disappointment in the Russian Grand Prix two weeks ago when He finished the race in third place due to a 10-second hiatus.

Hamilton had won once at the Nürburgring circuit in 2011 with the McLaren team equipped with a Mercedes engine, and would try to lead Mercedes to its first victory on the circuit since the coronation of Argentine Juan Manuel Fangio at the frightening “old” circuit in 1954.

But the task of the Briton, who has stuck to 6 wins this season and is still at the top of the overall standings with 205 points, will be a tough task for his colleague Bottas (161 points), who won in Russia and is still determined to bridge the gap with the world champion.

“I will not give up and we will continue to press,” Bottas said after defeating Verstappen in Sochi, realizing the difficulty of his mission against Hamilton, who is expected to respond to his frightening defeat in Russia.

These were the details of the news Eiffel Grand Prix: Bottas takes off first against Hamilton’s Pursuit of... for this day. We hope that we have succeeded by giving you the full details and information. To follow all our news, you can subscribe to the alerts system or to one of our different systems to provide you with all that is new.