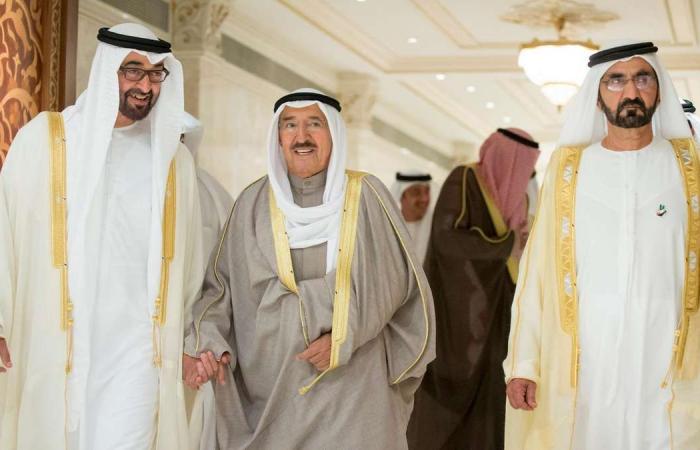 Sheikh Sabah, Kuwait's foreign minister between 1963 and 2003, And Khalid Jaffar, Kuwait's ambassador to London, with Sir Neville Bland Of the UK Foreign Office in 1964. Rex Features

Sheikh Sabah kisses a Palestinian boy at a hospital in October 2000. Sheikh Sabah visited five Palestinians who had arrived in Kuwait for medical care. AFP

Kuwaiti's first deputy premier, foreign minister and chairman of the Supreme Petroleum Council Sheikh Sabah visits injured oil workers following a blast at the Al Rawdhatain oilfield north of Kuwait, near the border with Iraq. Four people were killed and 19 others injured. AFP

Kuwaiti prime minister Sheikh Sabah performs a Kuwaiti traditional dance during the inauguration of a naval base in Kuwait in 2004. AFP

Sheikh Sabah welcomes Sultan Qaboos of Oman to Kuwait City in June 2005 at the start of a three-day official visit. AFP

Chinese President Hu Jintao walks with Kuwait's Emir Sheikh Sabah during a welcoming ceremony held at the Great Wall of the People in Beijing, China in May 2009. EPA

President Sheikh Khalifa with Sheikh Sabah at the GCC Summit in the United Arab Emirates in December 2010. EPA

Sheikh Sabah is welcomed by Crown Prince Naruhito prior to their official dinner at the Imperial Palace in Tokyo in 2012. Reuters

Sheikh Sabah chats with Queen Elizabeth II as he arrives at Windsor Castle during a three-day state visit on November 27, 2012. Getty Images

US president Barack Obama shakes hands with Sheikh Sabah at Camp David in May 2015. EPA

Sheikh Sabah is received by Bahrain's King Hamad upon his arrival in Bahrain for the GCC summit in December 2016. Reuters

Sheikh Sabah at the Kuwait National Assembly in October 2019. EPA

These were the details of the news UAE Rulers lead tributes to Kuwait emir as three days of mourning called for this day. We hope that we have succeeded by giving you the full details and information. To follow all our news, you can subscribe to the alerts system or to one of our different systems to provide you with all that is new.