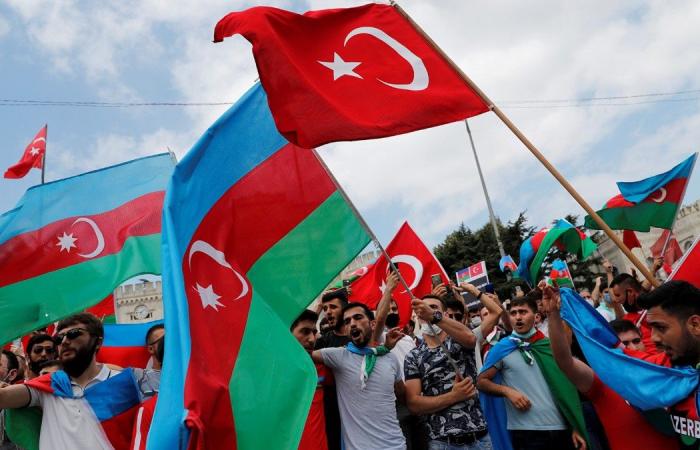 Two Syrian opposition fighters confirmed that Turkey Sends Syrian fighters from the opposition; To support Azerbaijan in its escalating conflict with its neighbor, Armenia, at a time in which Ankara pledged to intensify support for its ally, which is predominantly Muslim.

The clashes around Nagorno Karabakh are the fiercest since 2016, with reports of dozens of dead and hundreds injured.

On Monday, the Armenian ambassador in Moscow said that Turkey had sent about 4,000 fighters from northern Syria to Azerbaijan and that they were fighting there, which was denied by an aide to Ilham Aliyev, President of Azerbaijan.

Armenia also said: Turkish military experts are fighting alongside Azerbaijan in “Nagorno Karabakh”, a mountainous region split from Azerbaijan run by people of Armenian origin, and that Ankara has provided drones and warplanes.

Azerbaijan denied these reports, and Turkey has not yet commented, although senior officials, including President Recep Tayyip Erdogan, who is increasingly reviewing his country’s military strength abroad, have pledged to support Baku.

The two fighters, belonging to Turkish-backed opposition groups in the areas of northern Syria under Turkish control, said that they were on their way to Azerbaijan in coordination with Ankara.

The two fighters refused to publish their names. Due to the sensitivity of the matter, Reuters was not able to independently verify the authenticity of their accounts.

“I didn’t want to go, but I don’t have any money,” said a fighter who fought in Syria for Ahrar al-Sham, a group supported by Turkey.

Both men said that Syrian brigade commanders told them they would get about $ 1,500 a month, a large salary in Syria, whose economy and currency have collapsed.

One of the men said he arranged his mission with an official from the Turkish-backed Syrian National Army in Afrin, an area in northwestern Syria that Turkey and its allies in the Syrian opposition imposed control over two years ago.

The other fighter, who is from the Elite Army faction of the Syrian National Army, said that he was informed that it had been decided to deploy nearly 1,000 Syrians in Azerbaijan, and other opponents, who refused to reveal their names, spoke of numbers ranging from 700 to 1,000.

The two men who spoke to Reuters last week said that they expected to be dispatched on the 25th of September to guard facilities, but not to fight, and Reuters was unable to contact them on Monday to confirm their current whereabouts.

Hekmat Hajiyev, assistant to the President of Azerbaijan for foreign policy affairs, said that saying that Syrian fighters are coming to help his country is “complete nonsense,” adding: “Our armed forces have enough personnel and reserve forces.”

In past years, Turkey sought to exert influence abroad with incursions into neighboring Syria and Iraq, and military support for the internationally recognized government in Libya.

Turkey has repeatedly said that it is also ready to provide support to Azerbaijan, with which it has strong historical and cultural relations and runs joint projects with it in the energy field.

Concern that Turkey may be more involved in this conflict contributed to its currency’s decline to a record low against the dollar, on Monday.

Mustafa Sejri, a prominent opponent in Syria, did not confirm the deployment of fighters in Azerbaijan, but said that Turkey had become the “only hope” remaining for opponents of Syrian President Bashar al-Assad, who had regained most of the opposition-held territory in Syria with Russian and Iranian support.

He explained that the opposition alliance with Turkey takes different forms and that it is truly a common destiny, adding that he does not rule out that Turkey becomes a strategic choice for young Syrians.

Turkey has already used Syrian fighters to help repel an attack on the Libyan capital, Tripoli this year, by eastern Libyan forces (the Libyan National Army) led by Khalifa Haftar, with support from Russia and others.

The use of opposition fighters in Syria would create a third stage for competition between Ankara and Moscow, which has a military base in Armenia and considers it a strategic partner in the South Caucasus and supplies it with weapons. Russia has not commented on the reports of sending Syrian fighters to Azerbaijan.

Kremlin spokesman Dmitry Peskov said: Moscow is following the situation closely, and that the conflict must be resolved through diplomatic means.

These were the details of the news Turkey will deploy 1,000 mercenaries in Azerbaijan in exchange for 1,500... for this day. We hope that we have succeeded by giving you the full details and information. To follow all our news, you can subscribe to the alerts system or to one of our different systems to provide you with all that is new.