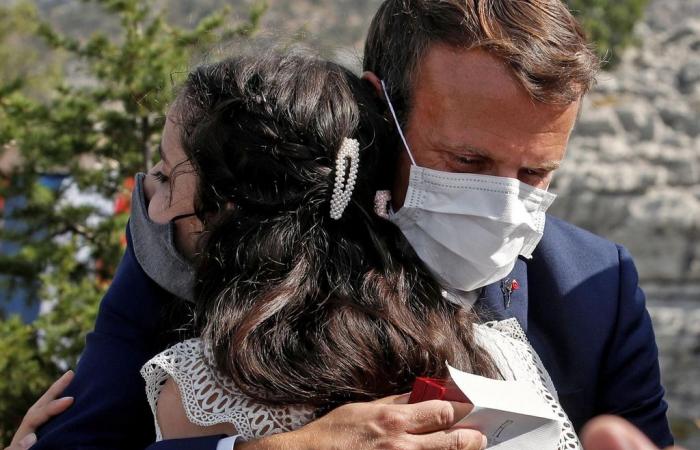 Mr Macron accused all Lebanese political parties of “collective betrayal” by failing to form a government within 15 days on September 1 despite their promises.

But he singled out Hezbollah for blocking political negotiations by insisting that its ally, the Amal Movement, keep control of the Finance Ministry, which it has held since 2014.

“They made no concessions,” Mr Macron said from the Elysee Palace on Sunday evening.

“Hezbollah cannot operate at the same time as an army against Israel, a militia unleashed against civilians in Syria and a respectable political party in Lebanon.

"It must not believe that it is stronger than it is. It must show that it respects all Lebanese. These last days, it clearly demonstrated the opposite."

His comments contrasted with his more conciliatory tone during two visits to Lebanon after the August 4 explosion at Beirut port, which killed at least 190 people and deepened the country’s political and economic crises.

His successor Mustapha Adib, nominated a day before Mr Macron’s September 1 visit to Lebanon, stepped down on Saturday after nearly a month of political infighting.

Iran-backed Hezbollah, Lebanon’s only armed political group, operates as a normal party nationally but is also engaged in regional conflicts.

It has been designated a terrorist organisation by countries including the US.

France and the EU separate Hezbollah’s military wing, which they consider to be a terrorist organisation, and its political branch.

Mr Macron met Mohammad Raad, the head of Hezbollah’s parliamentary bloc, during his two visits to Beirut on August 6 and September 1, as well as seven other representatives of Lebanon’s main political parties.

This was the first time that a French president met a Hezbollah member since the party’s creation in 1982.

France considers Lebanon, a former French protectorate with a large francophone population, a strategic regional ally and has organised donor conferences in past decades to help support its economy.

Mr Hariri is the head of Lebanon’s Sunni Muslim community and resigned on October 29 after nationwide protests caused by the country's economic crisis.

But Amal, whose president Nabih Berri is parliamentary Speaker, and Hezbollah did not provide concessions similar to Mr Hariri's, Mr Macron said.

Lebanon’s prime minister is traditionally always a Sunni, the president a Maronite Christian, and the parliamentary speaker a Shiite to respect the country’s delicate sectarian balance.

“Today, the question is really in the hands of Berri and Hezbollah: 'Do you want the worst-case scenario or do you want to engage the Shiite camp towards democracy, in the interest of Lebanon?'” Mr Macron said.

He said Lebanon was at risk of a new civil war.

Mr Macron said that he would wait “four to six weeks” to better understand the goals of Hezbollah and Amal.

“I do not share their ideologies or their ideas, but they are present. I did not put them in power,” he said.

“It’s in part Lebanese women and men who voted for them; some out of fear, and some out of conviction.

“I am not naive. I am just saying that before reaching conclusions that have profound consequences, it is good to go to the end of the first track."

Mr Macron said he would look at “concerted sanctions” against Lebanese leaders if needed.

“What are the other options?” he asked. “Can we set up a government with the Shiites?

"This is an option that could have been considered but it is not realistic, because today Lebanese leaders are afraid of Hezbollah.”

Mr Macron said the US decision on September 8 to blacklist two former transport ministers with close ties to Hezbollah made negotiations with the group more difficult.

But he shied away from accusing Iran of interfering in the Lebanese political process, saying he had “no proof”.

Mr Macron said he believed that despite Mr Adib’s resignation, Lebanese politicians should try again to form an independent government to implement rapid reforms and save the country’s economy.

“President [Michel] Aoun has the responsibility in the next few hours to pick up the initiative again and I hope, with all political forces, to succeed in nominating this government,” he said.

Mr Macron said he had resisted calls from some Middle East countries to “let Lebanon collapse with Hezbollah".

“I think this would be irresponsible because we have already lived through civil wars in Lebanon and nobody knows when it could end, and because we must not ask Lebanese women and men to pay the price for such policies.

“We are entering a phase where risks are much higher for Lebanon, as they are for the region.

“I address here tonight my deep friendship to Lebanese women and men.

"We think of you all the time. We will be there for you and we will never, never let you go."

These were the details of the news French President Emmanuel Macron points finger at Hezbollah as political crisis deepens in Lebanon for this day. We hope that we have succeeded by giving you the full details and information. To follow all our news, you can subscribe to the alerts system or to one of our different systems to provide you with all that is new.