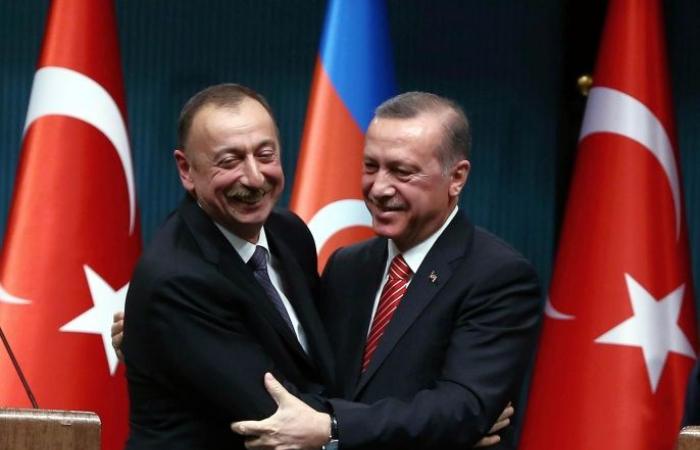 “One people in two countries” is a slogan raised by Turkey with all its partisan, intellectual and popular components to express the strong relationship that binds it with the state of Azerbaijan, which was embodied after the outbreak of violent military clashes today in the disputed Nagorno Karabakh region between Azerbaijan and Armenia, in which there were deaths and injuries on both sides.

Turkish President Recep Tayyip Erdogan has criticized the Armenian side, saying that Armenia is the biggest threat to peace and stability in the region.

In the same context, Turkish Defense Minister Hulusi Akar said that Armenia’s “aggressive” position represents the biggest obstacle to peace and stability in the Caucasus region, adding that Turkey condemns the Armenian attack and will stand by the Azeris in defending their territorial integrity.

The hashtag (Azerbaycan) tops the Turkish trend on Twitter on Sunday, after hundreds of thousands of Turks on social media expressed their support for Azerbaijan.

Close relationships
There is a high-level strategic cooperation council between Turkey and Azerbaijan that reflects the depth and size of relations at all levels, including the military and the economy.

Usually, Ankara receives the wounded Azeris who were injured in clashes with the Armenian forces continuously. The Turkish official media uses the expression “martyr” when talking about the dead Azerbaijani forces by Armenian bullets.

And Azerbaijan has a Muslim majority, with a heavy Turkish presence, while Armenia is a predominantly Christian country, mainly inhabited by Armenians.

Azerbaijan supplies Turkey with oil and increasing quantities of gas from the “Shah Deniz” field in the Caspian Sea. It is a big investor in modern Turkey. There are also giant Turkish projects in Azerbaijan that are vulnerable to targeting, including the “Baku-Tiflis-Kars” railway line and the power transmission line. Baku-Ceyhan.

Turkish consensus
In the meantime, Turkish journalist Ismail Kaya confirms to Al-Jazeera Net that the issue of Azerbaijan enjoys unparalleled unanimity in its border dispute with Armenia by all Turkish parties in all their political and intellectual orientations, given the national, ethnic and historical ties between the two countries.

Kaya considers the party consensus as a natural reflection of the state of popular consensus in his country on the need to stand by Azerbaijan, even if this entails entering into a direct military confrontation and possibly a large-scale war with Armenia, despite the risks of clashing with Russia, which is the biggest supporter of Armenia.

The Turkish journalist says, “It is a scene that reflects the state of internal consensus, in contrast to the existing divisions over the priority of Turkish military intervention in Syria, Libya and other areas.”

He added, “It is not known whether the large Turkish forces and military equipment that participated in the military exercises between the Turkish and Azerbaijani armed forces a month ago returned to Turkey, or whether the aim of the exercises was to keep the forces there to prepare for any future confrontation.”

In addition to the well-established historical, national and ethnic ties between the two countries, Turkey and Azerbaijan have major strategic interests related to gas transmission lines, the position of Azerbaijan in the energy market and the risks of any confrontation over Turkey’s energy supplies coming from Azerbaijan, and the latter’s urgent need for Turkey as an important corridor to the outside world, in addition to The interests associated with Azerbaijan being an important conduit for Turkey due to its ancient influence in the Caucasus and Central Asia, Kaya said.

He adds by clarifying, “To avoid a bigger and more dangerous clash with major powers in the region, Turkey is pushing through diplomatic means and by putting pressure on Russia and Iran to stop the Armenian attacks, and putting pressure on Armenia by emphasizing Azerbaijan’s support with weapons and military maneuvers to form a deterrent force that prevents slipping into a broader military confrontation, If that fails, direct military intervention will be an inevitable option for the Turkish army. ”

An ancient struggle
Azerbaijan accuses its neighbor, Armenia, of occupying about 20% of the Azerbaijani lands since 1992, which includes the “Karabakh” region, which consists of 5 provinces, and 5 other provinces in the west of the country, in addition to large parts of the provinces of “Aghdam” and “Fuzuli”.

The Nagorno Karabakh region, which is a mountain enclave inside Azerbaijan, is under the administration of people of Armenian descent, who declared their independence during a conflict that began with the collapse of the Soviet Union in 1991.

Despite a ceasefire agreement concluded in 1994, Azerbaijan and Armenia are still trading accusations of launching attacks around the separatist region and on the border between them.

The dispute between Azerbaijan and its successors Turkey, Armenia and Western countries behind it goes back more than 100 years, that is, to the events of 1915, when Armenian nationalists cooperated with Russian forces in order to establish an independent Armenian state in the Anatolia region, and they fought the Ottoman Empire during the First World War in 1915. 1914.

When the Russian army occupied eastern Anatolia, it received great support from the Armenian volunteers, and some Armenians who were serving in the ranks of the Ottoman forces defected and joined the Russian army, according to the Turkish version.

According to Anadolu Agency, with the continuation of the Armenian attacks, the government decided on April 24, 1915, to close what are known as the Armenian Revolutionary Committees, and to arrest and exile some prominent Armenian figures, and since that date, the Armenian side has accused the Turks of committing genocide against the Armenians during that period.

On the other hand, Turkey has repeatedly called for the formation of a committee of Turkish and Armenian historians, to study the archives related to the events of 1915, which is in Turkey, Armenia and other countries related to the events, in order to present its results in an impartial manner to world public opinion, or to any reference recognized by the two parties However, the proposal was rejected by Armenia.

These were the details of the news Karabakh clashes: Why does Turkey support Azerbaijan in its conflict with... for this day. We hope that we have succeeded by giving you the full details and information. To follow all our news, you can subscribe to the alerts system or to one of our different systems to provide you with all that is new.