Karabakh .. Azerbaijan declares war and Armenia calls on Turkey not... 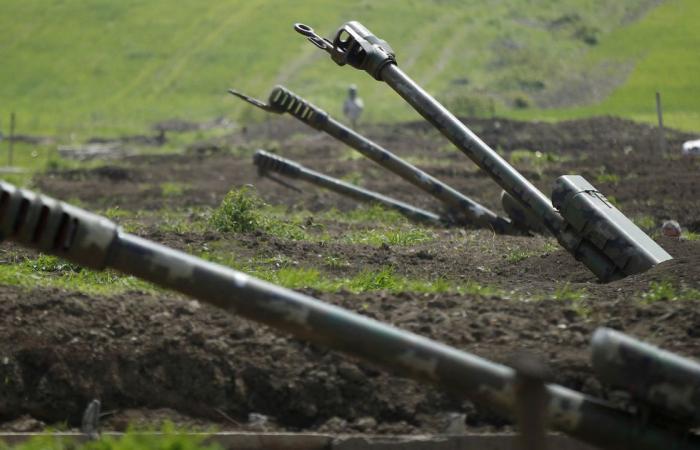 Today, Azerbaijan and Armenia declared a state of war in areas where clashes erupted this morning between the forces of the two parties in the disputed Nagorno Karabakh region, and the two sides accused each other of responsibility for starting the bombing, while Russia, Turkey and Iran called on the two parties to immediately cease fire.

The Azerbaijani parliament ratified the declaration of a state of war in some cities and regions following border clashes with Armenia, and the parliament imposed martial law in the areas of clashes, and the President of Azerbaijan Ilham Aliyev said that his country “will not accept a partial solution to the Nagorno Karabakh problem, and there is no alternative to restoring the sovereignty and unity of our state on All of its territory. ”

In a televised address to the Azerbaijani people, Aliyev added that his country’s army is “fighting on its own soil”. In a statement, the Azerbaijani Ministry of Defense accused the Armenian army of having initiated a “large-scale provocation operation in the early morning hours, by firing light and heavy weapons against Azeri military and civilian sites.” .

The Azerbaijani Ministry of Defense explained that it decided to launch a counterattack along the front line to respond to what it called Armenian provocations, in order to protect civilians in the region.

“The Republic of Nagorny”
On the other hand, Aryk Artunyan, head of the Armenian separatist administration called “Nagorno Karabakh”, announced earlier today the state of war and general mobilization in all the territory of the region. He said during an emergency session of Parliament in the provincial capital, Stepanakert (Khankendi, according to its Azerbaijani name), that he had decided to declare martial law and to mobilize all able-bodied males over the age of 18 years.

He added that the Armenian side did not want the war that Azerbaijan would lure him into, as he put it, blaming the Azerbaijani president for “the humanitarian catastrophe that will befall the region as a result of the war.”

The Armenian authority announced the killing of at least 10 Armenian military personnel from the region’s forces as a result of the Azerbaijani bombing. Artunyan also stated that civilian facilities were severely damaged, and indicated that a woman and her child were killed as a result of the bombing.

Armenian Prime Minister Nikol Pashinyan addressed his people, saying, “Be prepared to defend our holy land.” It was announced early this morning that Azerbaijan attacked civilian areas in Nagorno Karabakh.

Pashinyan accused Azerbaijan of declaring war on the Armenian people, warning that it is not ruled out that the escalation in the disputed region exceeds the borders of the region and threatens international security.

A criticism of Turkey
The Armenian Prime Minister also criticized Turkey, which supports Azerbaijan in this old conflict, and Pashinyan said that “Turkey’s behavior is fraught with devastating consequences for the southern Caucasus.” The Armenian official urged the international community to ensure that Ankara does not interfere in the ongoing conflict between Baku and Yerevan over the Nagorno Karabakh region. Since 1991.

On the other hand, Turkish President Recep Tayyip Erdogan said that Armenia “once again showed that it is the greatest threat to peace and security in the region,” and called on the people of Armenia to defend their future against what he described as an administration that leads them to disaster and uses them as a puppet.

The Turkish President also called on the world to stand by Azerbaijan in what he said was its struggle against occupation and oppression. He said that he assured his Azerbaijani counterpart that Turkey would continue to follow the principle of “one people, two states” and its full support for the Azerbaijani authorities.

Iranian state television quoted a Foreign Ministry spokesman as saying that Iran called for an immediate end to the clashes between Armenia and Azerbaijan, expressing Tehran’s readiness to help reach a ceasefire and start talks between the two parties.

Russia and Turkey also called, during a phone call between the two countries’ foreign ministers, for an immediate ceasefire in the Nagorno Karabakh region, for an end to escalation and for the situation to calm down.

The President of the European Council, Charles Michel, called for an end to the fighting between the Azerbaijani and Armenian sides, and said on Twitter, “The military moves must stop urgently to prevent further escalation,” calling for “an immediate return to negotiations without conditions.”

Azerbaijan and Armenia have been at odds for a long time because of the Nagorno Karabakh region, which is inhabited by the majority of ethnic Armenians in Azerbaijan, and whose secession was declared in 1991. In 1994, the two countries agreed to a ceasefire, but from time to time they exchanged accusations of attacks. The problem of the region is one of the longest and most complex crises that erupted in the regions of the Soviet Union following its collapse in 1991.

These were the details of the news Karabakh .. Azerbaijan declares war and Armenia calls on Turkey not... for this day. We hope that we have succeeded by giving you the full details and information. To follow all our news, you can subscribe to the alerts system or to one of our different systems to provide you with all that is new.