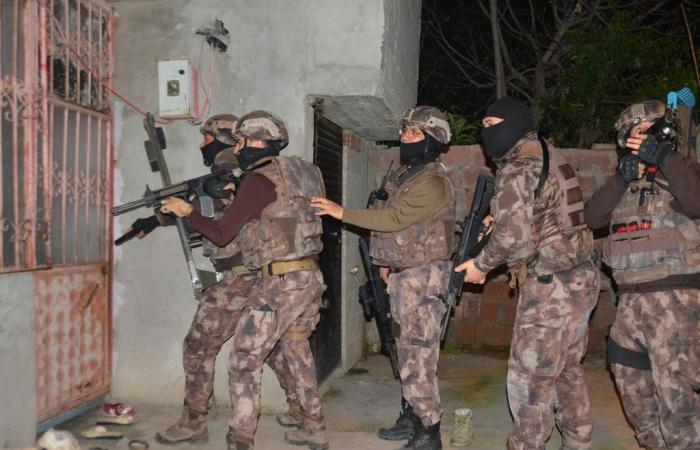 Hind Al Soulia - Riyadh - The arrest of the man accused of being ISIS’s “emir” in Turkey has led to questions about the Turkish authorities’ approach to radical Islamist terrorism.

Mahmut Ozden’s arrest in the southern city of Adana on Tuesday halted plans to kidnap Turkish political figures and hit economic targets, Interior Minister Suleyman Soylu said, adding that he had been receiving orders from Syria and Iraq.

However, the fact that Mr Ozden has been on the security forces’ radar for several years, having first appeared in a 2015 ISIS video threatening Turkey, raised doubts about why he had not been successfully prosecuted earlier. Before Tuesday, he had been detained at least four times since 2017.

Journalist Eker Acarer described the case as a “scandal”. “Is the interior minister unaware of the intelligence reports and the Ministry of Justice’s information?” he asked.

Turkey regularly carries out raids against ISIS and Mr Ozden’s arrest reportedly stemmed from the capture a week earlier of a suspect who had been reconnoitring targets in Istanbul.

However, Turkey’s earlier reputation as the “jihadi highway” for foreign fighters travelling to Syria and Iraq has led to claims it does not prioritise the ISIS threat, despite some 300 deaths in attacks attributed to the group in Turkey between 2014 and 2017.

Instead, critics say antiterror operations primarily focus on the Kurdistan Workers’ Party (PKK), which has carried out a 36-year insurgency against Turkey, or the group said to be behind a 2016 coup attempt, which the government has labelled the Fethullahist Terror Organisation, or FETO.

“The terrorism definition is applied more broadly to those charged on PKK/FETO-linked suspects… Prosecutors tend to dig deep when it comes to PKK or FETO suspects, while those charged for ISIS links get released more often for lack of evidence.”

A defence lawyer who has dealt with terrorism cases said the purges carried out following the coup attempt had seen many experienced police officers, prosecutors and judges removed from their posts.

“Now we’re seeing inexperienced people dealing with these difficult cases and they often don’t have the ability to do it,” said the lawyer, who asked not to be identified. “Courts are sometimes presented with indictments that seem to consist of cut-and-paste allegations irrelevant to the particular case.”

However, a Turkish security source denied any soft-pedalling regarding operations against ISIS suspects.

“ISIS is a real and long-term threat to Turkey,” he said. “No country in the West has faced rocket attacks or the numbers of people killed. The potential number of ISIS terrorists in Turkey is higher than any country in the West. But it’s very hard to uncover this community and find proof.”

Up to 9,000 Turkish citizens are estimated to have lived in ISIS-controlled territory before the fall of its de facto capital Raqqa in 2017.

“Currently ISIS is going through a recovery process,” said Dr Yayla, who teaches at DeSales University in the US. “They’re trying to regain their membership and at the same time rebuild a logistics network so Turkey is a recruiting and logistics base for them. They need to establish a secure cell network in Turkey.”

The release of ISIS suspects after arrest indicated that they are not considered a threat, he added. “Either they are working with Turkish intelligence or the judiciary releases them because they know they shouldn’t be messing with ISIS and its operatives.”

Turkey has not faced an ISIS attack since a gunman killed 39 people at an Istanbul nightclub on New Year’s Day 2017 – a period during which Turkish security forces say they thwarted 30 planned attacks.

However, when ISIS head Abu Bakr Al Baghdadi appeared in a video in April last year, six months before he was killed by US special forces, he brandished a folder labelled “Turkey Province”, sparking concerns about the group’s footprint in the country.

Such a display, though, was likely a propaganda tool, according to the security source, who questioned the existence of an overall ISIS leader for Turkey.

“Ozden’s an important guy in terms of local matters [in Adana] and capturing him is a positive step in fighting ISIS but I don’t think he’s the guy who controls everything for ISIS in Turkey,” the source said.

“It’s good for the minister to say we’ve captured the head of ISIS but I don’t think there’s such a thing.”

While there were signs of ISIS reorganising in Turkey, it remained too fractured between multiple cells, many without any communication to the leadership outside Turkey, he added.

Mr Mandiraci, who co-authored a June report on Turkey’s ISIS returnees, said many remained in touch with fellow members and “continued to express a desire to join a new caliphate should the opportunity emerge”.

These were the details of the news Arrest of Turkey's ISIS 'emir' highlights skewed anti-terrorism priorities for this day. We hope that we have succeeded by giving you the full details and information. To follow all our news, you can subscribe to the alerts system or to one of our different systems to provide you with all that is new.