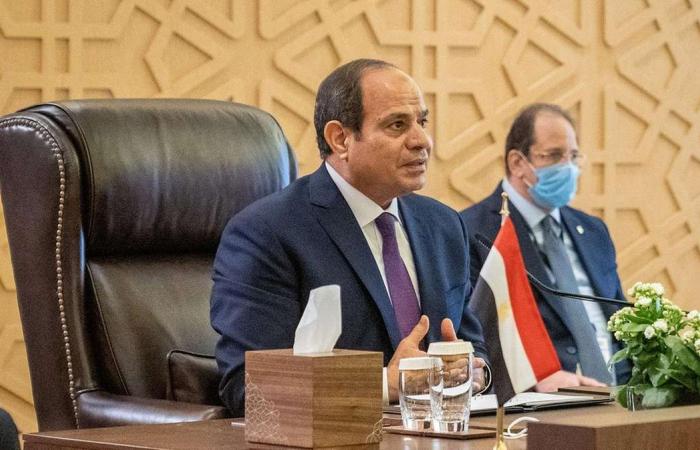 Hind Al Soulia - Riyadh - Furious and frustrated, Egypt’s President Abdel Fattah El Sisi on Saturday threatened to deploy the army in “every village” to stop what he said was the destructive and rapid encroachment of illegal construction on farmland in the mainly desert nation.

A hands-on general-turned-president, Mr El Sisi said Egyptians were their country’s worst enemy, equating the urban invasion of farmlands with terrorism and describing it as a threat no less serious than the massive dam being built by Ethiopia that Cairo fears will reduce its vital share of the Nile’s waters.

“I have enough engineering machinery to obliterate and remove [illegal buildings] and if people don’t like that, then they can have a referendum [on his leadership] and I just leave,” the visibly angry Egyptian leader said during a live broadcast of his visit to the Mediterranean city of Alexandria to inaugurate a motorway.

Mr El Sisi, who has routinely used such occasions to address the nation, was referring to both urban encroachment on farmland as well as illegal construction in general and the theft of state land.

“I am tortured and pained every day when I see my country being decimated and its own people are destroying it. We are this country’s worst enemies,” he said in a raised voice.

The building of homes on farmland is a chronic problem unresolved for decades in Egypt, where less than 10 per cent of the land is occupied by a population of 100 million that is growing by about 2 per cent every year.

I am telling Egyptians now that I don’t know what to do. This is our land, the land that feeds us.”

Mr El Sisi made it clear nearly four years ago that the theft of state land, illegal building and the urban spread into farmland must stop. He launched a high-profile campaign to prosecute offenders or make them pay compensation.

The problem threatens Egypt's food security and also complicates government efforts to prevent the emergence of shanty towns while it invests billions of dollars on housing projects for poor and low-income Egyptians.

It has taken added significance with the completion of the Grand Ethiopian Renaissance Dam. Egypt depends on the Nile for nearly all its water needs and has tried unsuccessfully for the past decade to reach an agreement with Addis Ababa on the amount of water the Horn of Africa nation would guarantee during persistent drought and on a mechanism to resolve future disputes. Sudan, another downstream nation like Egypt, also wants an agreement with Ethiopia to ensure the continued operation of its own hydroelectric dams on the Nile.

On Saturday, the Egyptian leader said there were currently 700,000 building violations across the country and that settlements has been reached on only 10 per cent of them since 2016.

Turning to Defence Minister Mohammed Zaki, seated to his left, Mr El Sisi said: “I will not allow the destruction and loss of our country and will order the Egyptian army to be deployed in every village. We either stop [the illegal construction] and we become a proper nation, or I leave my position and walk away and someone else should take over and destroy and ruin it the way things are going now.”

The Egyptian leader implicitly blamed the relevant cabinet ministers, provincial governors and police chiefs for the failure to stop illegal construction on farmland.

“This is a mandate, a challenge and a test for the government,” he said, asking for more diligent application of the law. “It should not be a source of shame for those who cannot tackle their country’s problems to step down.

“It is not the time for those who cannot or who are afraid. If you cannot, then say ‘salamu aleikom,’ but if you chose to stay, then you must carry out orders.”

These were the details of the news Sisi fumes over Egyptians building homes illegally on farmland for this day. We hope that we have succeeded by giving you the full details and information. To follow all our news, you can subscribe to the alerts system or to one of our different systems to provide you with all that is new.