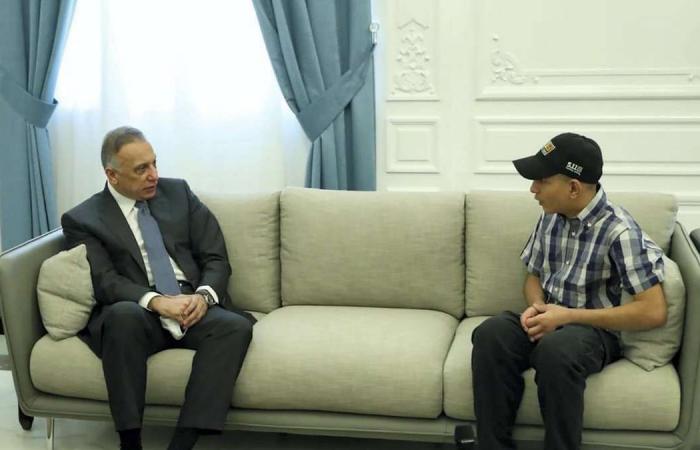 Hind Al Soulia - Riyadh - Iraqi Prime Minister Mustafa Al Kadhimi met with a teen protester abused by security officers on Monday and told him the men were in custody and would face trial.

Hamid Saeed, 16, was reportedly assaulted by three members of the Interior Ministry’s Law Preservation Forces and stripped naked, with videos of the abuse shared online.

He and his mother were threatened with sexual assault, he was also beaten and had his hair cut with a blade.

Videos of the incident and of the boy explaining what happened have gone viral in Iraq, sparking a backlash against security forces accused of heavy-handed tactics that have caused over 500 deaths in the months of anti-government street protests.

“The prime minister received Hamid Saeed, who was subjected to an immoral and unlawful attack. The perpetrators were arrested and relieved from their positions after an investigation,” a statement from his office said.

It said the officers in question had been referred to the judiciary.

Separately, Mr Al Kadhimi said that his Cabinet is in the process of reassessing the role of the Law Preservation Forces in light of a string of recent incidents involving officers.

The unit was established from elements of the Interior Ministry’s rapid deployment forces and other cadres after the outbreak of the mass demonstrations in October.

"The base of institutions is to protect people and not to abuse them," the prime minister said.

The Interior Ministry said the videoed incident took place in April. Local media said Mr Hamid was one of the hundreds of civilians detained for joining the anti-government protests.

The Iraqi public took to the streets to express their anger against unemployment, lack of basic services and corruption in Iraq.

Nearly 600 demonstrators have been killed by security forces or Iran-backed, government-sanctioned militias.

On Sunday, Mr Al Kadhimi ordered the commander of the Law Preservation Forces, Gen Saad Khalaf, to be confined to his headquarters and the force to be “re-examined as an institution”, state media said.

These were the details of the news Iraqi prime minister tells boy abused by officers they will face trial for this day. We hope that we have succeeded by giving you the full details and information. To follow all our news, you can subscribe to the alerts system or to one of our different systems to provide you with all that is new.