Muslims around the world prepare for Eid Al Adha - in pictures 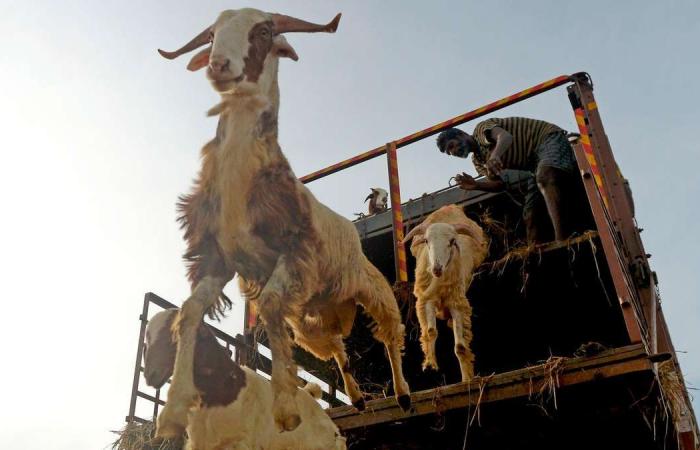 Hind Al Soulia - Riyadh - A livestock vendor unloads sheep from a truck ahead of the Muslim festival of Eid Al Adha in Chennai. AFP

A vendor holds melons as he waits for customers at a fruit market in Kabul. AFP

A Palestinian man sharpens a knife that will be used to slaughter cattle or cut meet during Eid Al Adha, in Gaza City. EPA

A young sheep farmer drags one of his sheep toward the sea in order to clean it in Dakar, Senegal, Western Africa. AFP

A customer arrives with his children to buy a camel in Rawalpindi. AFP

A trader using a cloth as a protective face mask deals with customers at a livestock market in New Delhi, India. REUTERS

A shepherd carries a sheep as his herd graze on a hilltop in Ras jebal, Bizerte, North of Tunis, Tunisia. EPA

A truck carrying livestock arrives to a market in Khartoum, Sudan. AP Photo

A child looks at a camel brought from Western Indian state of Rajasthan to Kolkata for Eid Al Adha. AFP

The first quarter moon shines above the July Column at the Place de la Bastille during the night of Al Tarwiyah, on the 8th Dhu Al Hijjah, two days before Eid Al Adha, in Paris, France. EPA

A Yemeni at a traditional Turkish bath in Sanaa, Yemen. EPA

These were the details of the news Muslims around the world prepare for Eid Al Adha - in pictures for this day. We hope that we have succeeded by giving you the full details and information. To follow all our news, you can subscribe to the alerts system or to one of our different systems to provide you with all that is new.