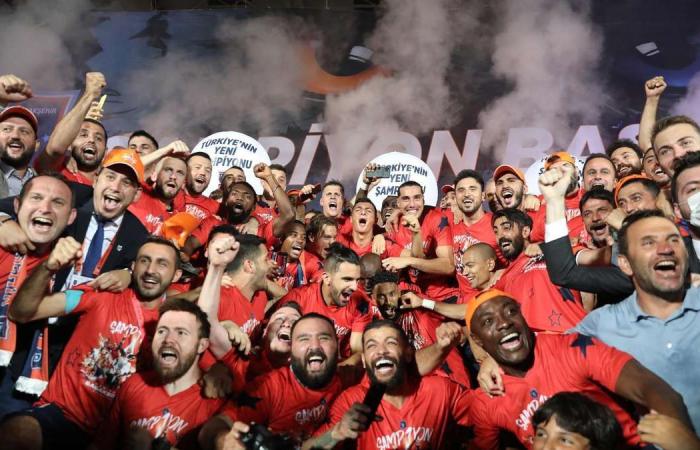 Hind Al Soulia - Riyadh - Basaksehir, the football club accused by many of close ties to Turkey’s ruling party, will on Sunday evening celebrate their domestic championship in the home neighbourhood of one of their biggest fans, President Recep Tayyip Erdogan.

Although the team secured the Super Lig title last weekend, celebrations were delayed until the away game against fellow Istanbul side Kasimpasa, based in the working-class district where Mr Erdogan grew up and whose stadium is named after the president.

In another auspicious sign, the season’s final match coincided with the anniversary of the 2014 inaugural match for Basaksehir’s stadium, an exhibition game that saw Mr Erdogan pull on the club’s orange jersey and score a hat-trick.

The club's success upsets the order that has dominated the league since it was founded in 1959, namely the pre-eminence of Istanbul’s “Big Three” of Fenerbahce, Besiktas and Galatasaray, who between them have won 54 titles.

Outside this trio, only Trabzonspor and Bursaspor had previously been champions. A further worrying sign for the Big Three was that none finished champions or runners-up for the only the second time in the league’s history.

“It’s a historic season. I don’t remember any season when one of the Big Three didn’t come in the top two,” Basaksehir chief executive Mustafa Erogut said.

Since 2014, when the club took its current form, Basaksehir has always finished in the top four, securing entry to profitable European competition.

While many fans put this success down to its ties to the ruling Justice and Development Party (AKP) and the perceived financial backing this has won the club, less partisan voices point to Basaksehir’s club structure.

Most Turkish clubs are membership-based foundations governed by regular election. Patrick Keddie, author of The Passion: Football and the Story of Modern Turkey, said this created instability due to fan demands for “instant success and big-name stars”.

Basaksehir, meanwhile, are a joint-stock company owned by a small group of stockholders.

“They’re pretty much the only club in the Super Lig with an interest in the long term and are the best-run club by miles,” Mr Keddie said.

“On the one hand Turkey is known for its football fanaticism but sometimes that can drive a lot of short-termism and bad decision-making.”

Last year Basaksehir came close to winning the title but stumbled in the final matches. “If any other big Turkish club lost the championship as we did last year, they would change everything, the coach, the players, everything,” Mr Erogut said.

“Because of our corporate structure we didn’t have this pressure and we gained experience from this loss.”

The club is not burdened with the huge debts of other Turkish clubs and faces fewer problems adhering to financial regulations, despite spending significantly on players such as Brazilian Robinho, former Chelsea forward Demba Ba and ex-Manchester City star Gael Clichy.

It also does not finance a host of other sports clubs ranging from water polo to table tennis, as the Big Three do.

However, it is difficult to ignore the sponsorship Basaksehir gets from companies with ties to the government, as well as links inside the club itself. Chairman Goksel Gumusdag, for example, is married to a niece of Mr Erdogan’s wife.

“I think people consider Basaksehir the football branch of the AKP,” said football journalist Alp Ulagay. “If the AKP loses an election and Erdogan loses the presidency, Basaksehir will suffer.”

It is a charge rejected by the club. “In the real world the government backs all the teams in Turkey,” Mr Erogut said. “The president likes football very much and the government supports teams by building stadia and through tax breaks.”

Commentators point to the experience of other “artificial” teams as examples of what could happen to the champions.

Ankara-based Osmanlispor thrived under the patronage of the city’s AKP mayor but plummeted after he stood down in 2017 and were recently relegated to the third tier. In the 1930s, Gunes Spor succeeded thanks to the backing of Turkey’s founder Mustafa Kemal Ataturk but vanished following his death.

“They have the capacity to go on and cement their dominance next season, with Champions League football and the income that comes with it,” said Mr Keddie. “However, their success is also contingent on politics and the sponsorship they get from government circles.”

Irrespective of the club’s success, its lack of fans – attendances at its 17,000-capacity stadium averaged 2,900 this season – reinforces the opinion that it is an AKP creation.

Daghan Irak, a sociologist at the University of Huddersfield, said largely-secular football fans have always presented an intractable obstacle to Mr Erdogan’s dream of a pious Turkey.

The Basaksehir neighbourhood was developed by Mr Erdogan when he was Istanbul’s mayor in the 1990s “as an alternative to districts that are the homes of secularism and the big football clubs of Istanbul”, Dr Irak added.

Years later, anti-government chants at matches and fan involvement in the 2013 Gezi protests led to the foundation of the club. “Basaksehir emerged a year after Gezi to replace the secular lifestyles of other clubs’ fans,” said Dr Irak. “Like the neighbourhood, it’s Erdogan’s project.

“Basaksehir is trying to replace a certain fandom culture but no matter how many titles they win, they are still a failed project because the project isn’t about winning championships but changing the culture.”

As for the club’s future, observers say they will find it hard to consolidate their success without a larger fan base.

The club’s chief executive, Mr Erogut, is hoping community outreach programmes will draw in young fans without existing allegiances to other teams. “I think in five to six years we will have a good fan base but it’s more difficult than winning the league,” he said.

Dr Irak pointed to the poignancy of Basaksehir’s title coming during the coronavirus pandemic.

“Basaksehir is a champion that plays for empty stadiums. It’s the best time for them to win because nowadays every stadium is empty,” he said. “Nothing in Turkey is normal right now so it’s just another abnormality.”

These were the details of the news Turkey's Basaksehir football club wins championship but not fans' hearts for this day. We hope that we have succeeded by giving you the full details and information. To follow all our news, you can subscribe to the alerts system or to one of our different systems to provide you with all that is new.