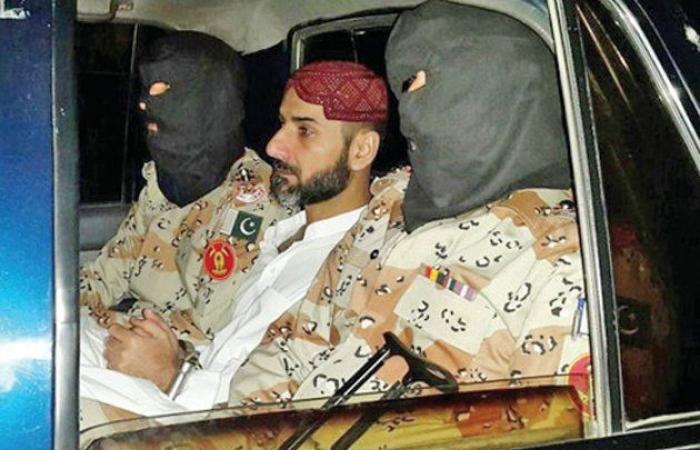 Jeddah - Yasmine El Tohamy - KARACHI:  A Pakistani ganglord suspected of being behind a criminal empire of extortion, kidnapping and drug trafficking, has confessed to spying for Iranian intelligence agencies in 2014, according to a report released by Pakistan’s provincial government in Sindh this week.

The report said Uzair Jan Baloch was also convicted of spying this April by a military court and sentenced to 12 years in prison, according to a June 13 letter written by the senior superintendent of Karachi Central Jail.

A copy of the letter was seen by  Arab News, though the Pakistani military could not be reached to confirm if Baloch had been convicted by an army tribunal.

Baloch, for years considered close to politicians within Sindh’s ruling Pakistan People’s Party (PPP), is currently accused in at least 59 criminal cases, according to police records.

He is allegedly being held at a makeshift jail at the Karachi office of the paramilitary “Rangers” force. The PPP denies any links with the gang leader.

In 2016, Baloch was interrogated by a Joint Investigation Team (JIT) comprising police, Rangers, and a number of civilian and military intelligence agencies. Officials said he admitted spying for Iran and being involved in 59 acts of murder, kidnapping, extortion and attacks on law enforcement.

Longtime fugitive Uzair Jan Baloch was arrested by Interpol in Dubai in 2014.

According to the report, Baloch told the investigation that he obtained a fake Iranian birth certificate in the late 1980s and an Iranian identity card and passport in 2006.

The report details how he met a man named Haji Nasir in the Iranian city of Chabahar in 2014. Nasir offered to arrange a meeting between Baloch and Iranian intelligence officers.

“On the consent of the accused a meeting with Iranian intelligence officers was arranged by Haji Nasir in which the accused was asked to provide certain information about (Pakistan) armed forces officials,” the JIT report, which is publicly available, said.

It added: “The accused is found involved in espionage activities by providing secret information and sketches regarding army installations and officials to foreign agents, which is a violation of the Official Secrets Act, 1923.”

For years, Baloch thrived in Sindh’s teeming capital of Karachi, a key figurehead in the city’s notorious gang wars.

However, in 2006 he fled to Iran to escape an operation against street gangs in Lyari, one of Karachi’s most dangerous neighborhoods at the time.

He returned to Pakistan for a number of years, during which he even took part in a local government election, but he once again escaped to Iran in 2013 when Pakistan’s powerful paramilitary Rangers launched an armed operation to bring down Karachi’s soaring crime rates.

Baloch is believed to have also lived in Oman briefly before being arrested by Interpol in Dubai in December 2014.

In January 2016, Rangers announced that they had taken Baloch into custody in Karachi. The arrest surprised many who thought he was already in jail after being detained in Dubai.

The JIT report said after Baloch confessed to spying for Iran, he was handed over to the Pakistani military to be tried.

In a Twitter post in 2017, the head of the Pakistani military’s media wing said Baloch had been taken into custody under the Pakistan Army Act and the Official Secrets Act. However, the army has not revealed any details of his subsequent trial before a military court.

But a letter by the senior superintendent of the Karachi Central Jail in response to an anti-terrorism court said he was sentenced to 12 years in jail in April this year after being convicted for spying.

The letter, dated June 13, said: “Uzair Ali was convicted by the Lt. Col. Commanding Officer of the 1st Self-Propelled Medium Regiment Artillery on April 4 2020, in Pakistan Army Act section 59 (civil offenses), read with section 3 (penalties for spying) of the Official Secret Act and sentenced to suffer rigorous imprisonment for 12 years.”

Arab News asked the ISPR about Baloch’s conviction but did not receive a response.

Sindh Home Secretary Usman Chachar also did not respond to requests for comment, and a spokesman for Pakistan’s foreign office did not reply to text messages asking whether Pakistan had taken up the issue of Baloch’s confessed espionage with Iran.

Muhammad Ahmedi, the consul general of Iran in Karachi, did not respond to email and WhatsApp queries regarding the JIT report.

These were the details of the news Probe reveals Pakistani crime boss spied for Iran in 2014 for this day. We hope that we have succeeded by giving you the full details and information. To follow all our news, you can subscribe to the alerts system or to one of our different systems to provide you with all that is new.