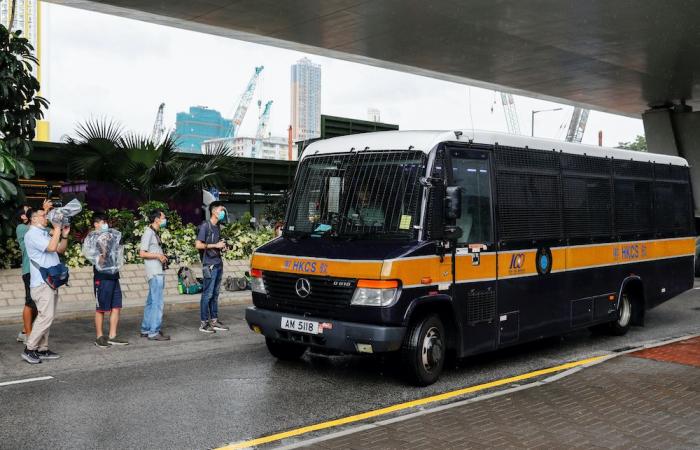 “A 24-year-old local man has been charged with one count of inciting others for secession and one count of terrorist activity,” the police said in a brief statement.

A police source said the charges were brought against a man who drove his motorbike into a group of police officers on Wednesday during protests against the security law.

The source asked for anonymity on order to be able to speak freely.

Video footage captured by local television showed a man on an orange motorbike with a flag that declared “Liberate Hong Kong, Revolution of our Times” on the back.

He turned down a side street and drove into a group of riot police.

Bystander footage shot on a mobile phone captured a scene moments later, where the man was swiftly detained after he fell to the ground.

Police at the time said three officers were wounded.

Beijing’s new security law was enacted on Tuesday and kept secret until it became law, sending shockwaves through the city both for how it was imposed and the strangling of free speech provisions it contains.

But legal experts warn it proscribes even peaceful political views.

Hong Kong’s government, for example, have announced that using the phrase “Liberate Hong Kong, Revolution of our times” is illegal under the secession and subversion provisions.

The terrorism offences are broad and include attacks on vehicles or transport networks and “using dangerous methods to seriously endanger public health or safety”.

These were the details of the news Hong Kong police charge first person under new security law for this day. We hope that we have succeeded by giving you the full details and information. To follow all our news, you can subscribe to the alerts system or to one of our different systems to provide you with all that is new.