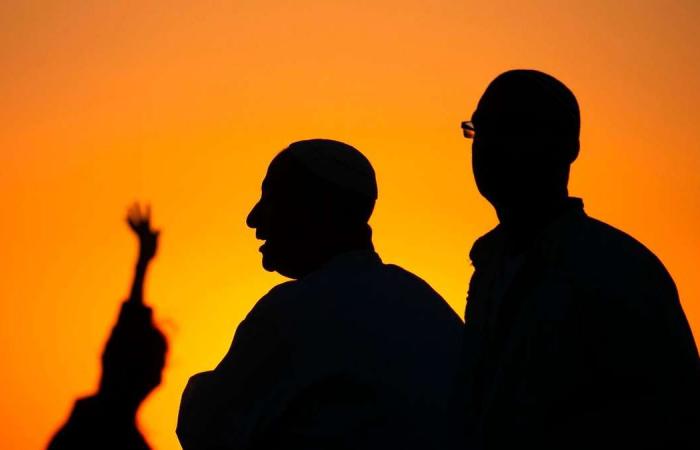 Thank you for your reading and interest in the news The Middle East Framed - regional photography for June 28, 2020 and now with details

Hind Al Soulia - Riyadh - Samaritans pray on top of Mount Gerizim near the northern West Bank city of Nablus as they celebrate the Shavuot festival at dawn. AFP

A baboon sits in a cage at a wildlife park in the Khartoum Bahri (North) twin city of the Sudanese capital. The park, which has been closed due to the coronavirus pandemic, has experienced the birth of several young animals during the closure. AFP

Syrian Kurdish women chant slogans and wave the flag of Kongreya Star, a confederation of women’s organisations in northeastern Syria, during a demonstration in front of a US base in the countryside of the Hasakeh province, to protest Turkish offensives in the northeastern areas of the country. AFP

Lebanese director Carol Mansour uses her phone to film pigeons flying while wearing a face mask, in the centre of the capital Beirut. Mansour, who lost her father living in Canada to the Covid-19 disease, admits "what scares me the most" is that mankind has learned nothing from this crisis. AFP

A Kuwaiti health ministry worker conducts a random test for the coronavirus in Kuwait City. AFP

Pakistani and Bengali workers clad in face masks work as tailors at a small factory in Karrada, in the central area of the Iraqi capital Baghdad. AFP

A Palestinian man inspects his damaged house after an Israeli air strike on a nearby Hamas site, in Khan Younis in the southern Gaza Strip. Reuters

This long-exposure picture taken early shows a man smoking past buildings destroyed by prior bombardment in the town of Ariha in Syria's rebel-held northwestern Idlib province, as the Milky Way galaxy is seen in the night sky above. AFP

These were the details of the news The Middle East Framed - regional photography for June 28, 2020 for this day. We hope that we have succeeded by giving you the full details and information. To follow all our news, you can subscribe to the alerts system or to one of our different systems to provide you with all that is new.