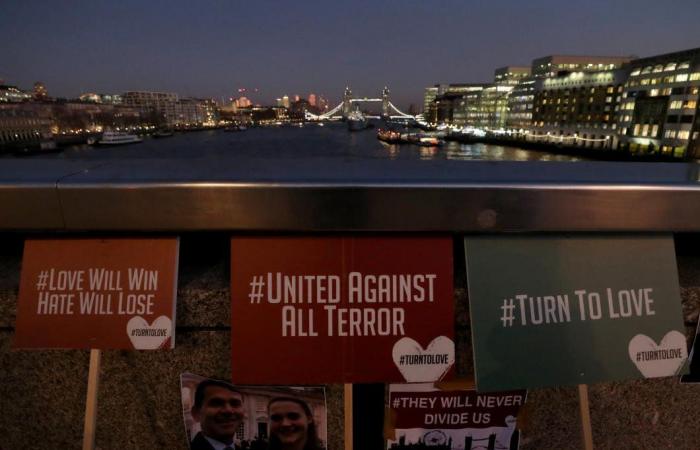 Jeddah - Yasmine El Tohamy - LONDON: Three people injured in the London Bridge attack have been sent home after receiving medical treatment as more details emerged on the stabbings.
Dr. Vin Diwakar, medical director for the National Health Service in London, said Friday that the victims of the attack were recovering and that the last patient had been discharged.
“Our thoughts remain with the families and friends of those who sadly lost their lives and all those who have been impacted,” he said.
Usman Khan stabbed two people to death and injured three others on Nov. 29 before being shot and killed by police on the bridge. Khan had been attending a conference on prisoner rehabilitation when he attacked Cambridge University graduates Saskia Jones, 23 and Jack Merritt, 25.
As the injured recovered, some of those who subdued him began to speak out. John Crilly, a former prisoner who used a fire extinguisher to corner Khan together with other bystanders, lamented Merritt’s death in a Facebook post, describing him as the “the best guy I ever met.”
“(Jack) was killed by a ... a pathetic rubber dingy rapids type terrorist,” Crilly wrote. “Jack actually tried helping this guy! To educate him. As he educated me.”
Crilly’s conviction in the slaying of 71-year-old Augustine Maduemezia, was quashed by the Supreme Court last year. The court ruled that the joint enterprise law — in which defendants were prosecuted for murder even if they did not strike the fatal blow — had been misinterpreted.
The 48-year-old studied for an Open University law degree while in prison and graduated this year.
“I had a bad life, I’ve changed it, I wasn’t guilty of murder,” Crilly said after his release. “I totally accept what I did and it was wrong.”

These were the details of the news Victims of London Bridge attack discharged from hospital for this day. We hope that we have succeeded by giving you the full details and information. To follow all our news, you can subscribe to the alerts system or to one of our different systems to provide you with all that is new.