India News - Coronavirus scare: Over 600 people under observation in Kerala 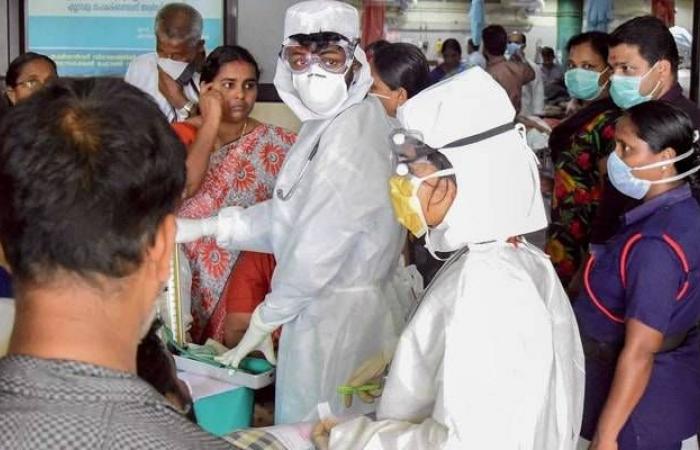 Thank you for reading the news about Coronavirus scare: Over 600 people under observation in Kerala and now with the details

Aden - Yasmine El Tohamy - Of the 633, seven are under observation in isolation wards at different hospitals.

A total of 633 people, who returned to Kerala from China in recent days, are under observation for possible exposure to the novel coronavirus, state Health Minister K K Shylaja said on Tuesday.

Of the 633, seven are under observation in isolation wards at different hospitals, according to officials.

The situation in the state was under control but the state needs to be vigilant, the minister told reporters.

"A total of 633 people are under observation in the state. As of now everything is under control. But we need to remain vigilant until the World Health Organisation says its safe," the minister said.

She asked those who have returned from China or other affected areas like Nepal or Sri Lanka to approach the health department without any hesitation.

"Those who have returned from China should approach the health department and follow the instructions of the officials.It has been learnt that the particular virus will be inactive in the body for a few days initially.

So it is better to stay under observation," the minister said.

"Out of the 633 persons who reached the state, seven are in different hospitals-two in Kochi, four in Thrissur and one in Malappuram district.

The rest are home quarantined," the official said.

He also said of the ten samples sent for testing at the National Institute of Virology at Pune, six tested negative for the virus while results of the others are awaited.

A three-member central team on Tuesday held a meeting with Kerala Health authorities, including Principal Health Secretary Dr Rajan N Khobragade, here and discussed the preventive measures taken against the backdrop of the Coronavirus outbreak in China's Wuhan province.

A thermal screening facility was opened at the Thiruvananthapuram airport on Tuesday to scan passengers coming from the neighbouring country, they told reporters.

"So far, no case of coronavirus has been reported in the country. There is nothing to worry about in the state as of now," Union Health and Family Welfare Adviser Dr M K Shoukath Ali, a team member, said.

He also said the NORKA (Non-Resident Keralites Affairs) department has been in constant touch with central government authorities and Keralites in China.

These were the details of the news India News - Coronavirus scare: Over 600 people under observation in Kerala for this day. We hope that we have succeeded by giving you the full details and information. To follow all our news, you can subscribe to the alerts system or to one of our different systems to provide you with all that is new.

PREV Fauci: US children could receive vaccine by year-end
NEXT Iran rules out nuclear deal meeting, says time not ‘suitable’