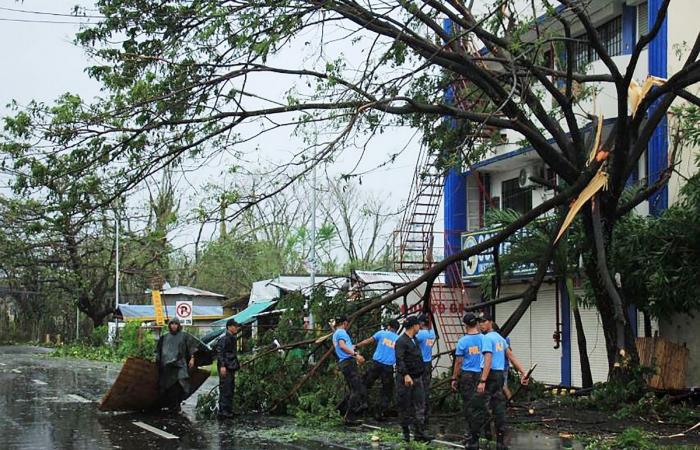 Thank you for reading the news about 205 kmph typhoon Kammuri pounds Philippines, Manila airport closed and now with the details

Aden - Yasmine El Tohamy - Nearly 500 flights were cancelled, and officials warned passengers not to come to the airport.

Typhoon Kammuri on Tuesday lashed the Philippines with fierce winds and heavy rain, as hundreds of thousands took refuge in shelters and the capital Manila shut down its international airport over safety concerns.

The powerful storm, which blew in windows and sheared off roofs, roared ashore late Monday and was due to pass south of Manila - home to some 13 million people - and thousands of athletes at the regional Southeast Asian Games.

Forecasters said Kammuri had weakened but remained strong, with sustained winds of up to 150 kilometres (93 miles) per hour, and maximum gusts of 205 kmph as it tracked northwest.

"We're still assessing the damage but it looks like it's severe," said Luisito Mendoza, a disaster official in the town where the storm made landfall.

"There is one place where water levels reached the roof... our own personnel got hit by shattered glass," he added, saying many trees and power poles were felled by wind.

It was not clear when flights would resume, but authorities gave an estimate of 11:00 pm (1500 GMT) Tuesday and noted their decision would depend on the weather.

Nearly 500 flights were cancelled, and officials warned passengers not to come to the airport.

One the terminals AFP visited, which would normally be bustling with morning departures, was occupied by a handful of staff and stranded passengers.

One traveller, 23-year-old Canadian Constance Benoit, was hit with a nearly day-long delay to her flight back home.

She had arrived in Manila on a typhoon-buffeted flight Monday morning from the central island of Cebu.

"It was the most turbulent flight I ever took in my life," she told AFP. "I just discovered what airsickness is."

About 340,000 people had been evacuated from their homes in the central Bicol region, disaster officials said.

People living in low-lying slum districts of Manila were told to leave their makeshift homes as a precaution, but it was not clear how many people were impacted.
The Philippines is hit by an average of 20 storms and typhoons each year, killing hundreds and putting people in disaster-prone areas in a state of constant poverty.

These were the details of the news 205 kmph typhoon Kammuri pounds Philippines, Manila airport closed for this day. We hope that we have succeeded by giving you the full details and information. To follow all our news, you can subscribe to the alerts system or to one of our different systems to provide you with all that is new.