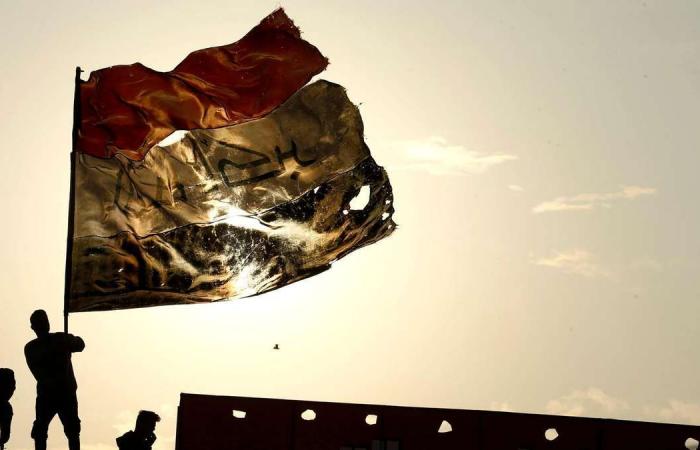 Thank you for your reading and interest in the news Iraq: Protesters accuse political parties of infiltration attempts and now with details

The demonstrators formed human chains separating the squares in central Baghdad from the bridges leading to the Green Zone to avoid friction with security forces, organisers told The National.

The Green Zone is a heavily fortified area where most of the ministry headquarters and foreign embassies are located.

Baghdad and nine southern provinces have been the sites of anti-government demonstrations since October 1.

The Iraqi government and Iran-backed groups have led bloody campaigns to suppress the demonstrations, killing almost 500 protesters and wounding more than 17,000, doctors and security officials say.

The security measures imposed on Tuesday by organisers of the protests included closing the "Turkish Restaurant" building.

The 14-storey building has become a symbol of the demonstrators' commitment to their cause and control over the area.

Protest organisers made repeated calls through loudspeakers from local Al Tahrir Radio station asking demonstrators to stay inside specified areas and not approach the bridges.

The message was reinforced on large banners displayed throughout the protest area, urging everyone to commit to the peaceful demonstrations.

There have been rumours of calls from outside the protest movement for provincial demonstrators to gather in Baghdad to storm the Green Zone.

Those already in Tahrir Square believe political parties were behind these calls, aiming to sow discord among the protest movement and create chaos.

Thousands of demonstrators from the provinces of Dhi Qar, Maysan, Samawa and Basra arrived in Tahrir Square in central Baghdad in the early hours of Tuesday morning.

Questions were raised as to who was able to arrange the dozens of modern buses that carried the newcomers, and gain security approval for them to cross dozens of security checkpoints along the motorways linking Baghdad to the southern provinces.

These checkpoints blocked previous attempts by those from outside the city to join the protests in the capital.

“The situation is calm now and everything is under control,” organiser Hassan Al Sa’adi said.

“The [Iran-backed] parties wanted to create discord and push the protesters into the Green Zone to justify their killing. They want to sabotage the demonstrations.

“Thank God we took control of the situation. We are aware of their attempts."

The spontaneous, leaderless demonstrations were organised by social media and word of mouth against long-standing grievances including government corruption, unemployment and lack of basic services.

The rallies have quickly grown into the largest grassroots protest movement that Iraq has seen in recent times.

Protesters have stayed on the streets despite some of their demands being met.

They include the resignation of Prime Minister Adel Abdul Mahdi late last month, the removal of the High Electoral Commission, and the approval of a law that gives independent judges almost complete power to oversee the electoral process.

"The resignation of the government is not enough,” said university student Muntadhar Zayer, who has been in Tahrir Square since October 25. "The killers and the kidnappers are still free.

“They are linked to the political forces that are still trying with all their might to end the demonstrations by all means, and are still trying to manipulate the articles of the electoral law to ensure their return.

“Our goal is to get rid of all of them. Then we may go back to our homes.”

Despite the anniversary of the defeat of ISIS, there were no celebrations in Baghdad and the provinces, except a government declaration of a national holiday.

The demonstrators celebrated in their own style, reading a short statement in which they thanked the security forces and leading clergy in Najaf for their role in defeating the group.

"Today is the anniversary of the victory of Iraq and the Iraqis over the rats of ISIS,” they said in Tahrir Square.

“We are now at the gates of a new Iraqi victory thanks for your efforts, your peacefulness and your sit-ins.”

These were the details of the news Iraq: Protesters accuse political parties of infiltration attempts for this day. We hope that we have succeeded by giving you the full details and information. To follow all our news, you can subscribe to the alerts system or to one of our different systems to provide you with all that is new.