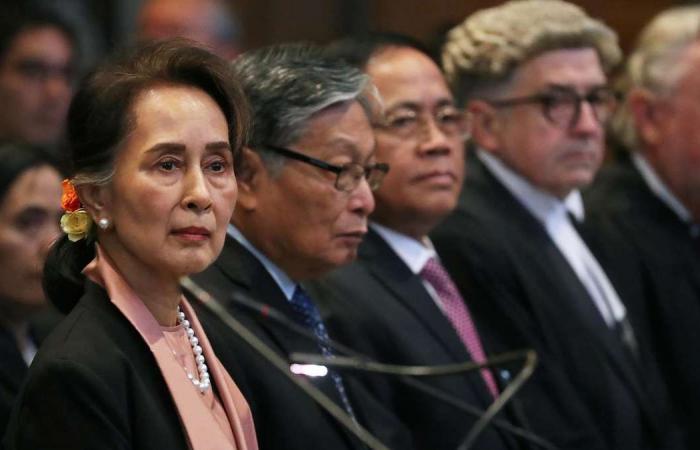 Lawyers for the Gambia’s legal team outlined the case against Myanmar at the International Court of Justice (ICJ), giving detailed descriptions of how the Muslim minority were raped, murdered and had their homes burnt to the ground by the Myanmar military during what has been called an ethnic cleansing.

“It is indeed sad for our generation that 75 years after humankind committed itself to the words ‘never again,’ another genocide is unfolding right before our eyes,” Gambian Justice Minister Aboubacarr Tambadou told the court in The Hague. “Yet we do nothing to stop it.”

“This is a stain on our collective conscience, and it will be irresponsible for any of us to simply look the other way and pretend that it is not our business,” he said.

The case is being brought by Gambia as the first attempt to bring Myanmar to justice over its bloody 2017 military crackdown on the Rohingya. The Muslim-majority West African state is acting on behalf of the 57-nation Organisation of Islamic Cooperation.

Gambia is seeking for provisional measures to prevent “extrajudicial killings or physical abuse; rape or other forms of sexual violence; burning of homes or villages; destruction of lands and livestock, deprivation of food” and other actions “calculated to bring about the physical destruction of the Rohingya group in whole or in part.”

Ms Suu Kyi, who was there to personally defend Myanmar's military against accusations of genocide, arrived at the International Court of Justice in The Hague in a motorcade. She ignored questions shouted out to her by waiting reporters, then sat expressionless in the courtroom as alleged atrocities against the Rohingya Muslim minority were detailed.

The civilian leader, once venerated as a human rights icon for her non-violent struggle for democracy, has been tarnished by her silence over the plight of the Rohingya and her defence of the same generals who once kept her under house arrest.

She is expected to defend the actions of the army in what is set to be an extraordinary hearing at the ICJ on Wednesday.

Ms Suu Kyi's office has said she will "defend the national interests of Myanmar" as she becomes one of the first national leaders to lead their country's defence at the court.

The case will be watched in Bangladesh, where about 740,000 Rohingya were forced to flee into sprawling camps by the bloody campaign in Myanmar's northwestern Rakhine state.

I demand justice from the world

"I demand justice from the world," Nur Karima, a Rohingya refugee whose brothers and grandparents were killed in a massacre in the village of Tula Toli in August 2017, told AFP.

UN investigators last year branded the Rohingya crackdown a genocide. The three-day hearing at The Hague promises to be a historic one for the ICJ, which was set up in 1946 to adjudicate disputes between UN member states.

Outside the court, scores of Rohingya supporters protested with banners depicting photos of Ms Suu Kyi “Shame” and “agent of the military” written under them.

While a group of seven Nobel Peace Prize winners signed a statement calling for their fellow laureate to publicly acknowledge the crimes committed against the Rohingya.

“We are deeply concerned that instead of condemning these crimes, Aung San Suu Kyi is actively denying that these atrocities even occurred,” they wrote.

“Aung San Suu Kyi must be held criminally accountable, along with her army commanders, for crimes committed.”

Hundreds of Suu Kyi supporters have rallied in defence of their leader in Yangon, Myanmar over the past few days.

While at The Hague one of her supporters was quoted as saying people abroad have been "misinformed" about events in Myanmar.

"Yes, military dictators have been committing human rights violations in the whole Burma," Moe Moe Hnin, 58, told Reuters. "It is not Burma, it is not Burmese people or our religion. We are not racist."

These were the details of the news Aung San Suu Kyi attends Rohingya genocide hearing at The Hague for this day. We hope that we have succeeded by giving you the full details and information. To follow all our news, you can subscribe to the alerts system or to one of our different systems to provide you with all that is new.