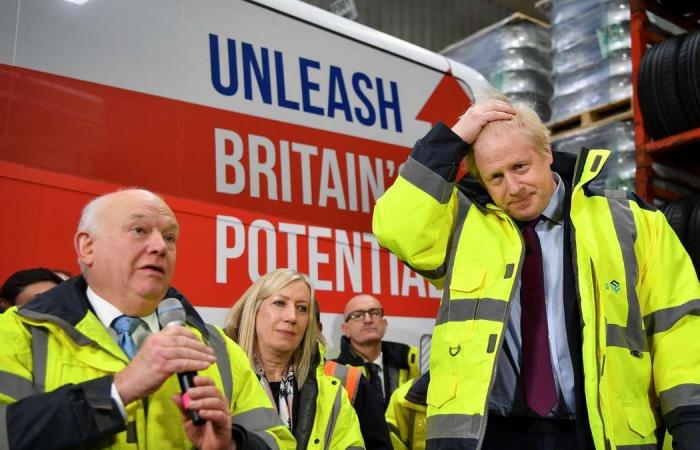 Hind Al Soulia - Riyadh - UK Prime Minister Boris Johnson sought to extend a 10-point advantage in the polls with a tour of key election battlegrounds in Labour strongholds on Monday, with three days of campaigning to go.

There are fears among his Conservative Party strategists that a last-minute swing to the opposition, perhaps driven by tactical voting, could end hopes of a majority.

Mr Johnson was put under pressure over a photo of a boy, 4, being treated on the floor of a state-run hospital last week.

Images of Jack Williment-Barr with an intravenous drip in his arm while receiving treatment confronted the campaign with its most problematic issue, the funding of the free health care system.

"It’s a terrible, terrible photo. And I apologise obviously to the families and all those who have terrible experiences in the NHS," Mr Johnson told a rally, before saying his policies would deliver more resources for the National Health Service.

"But what we are doing is supporting the NHS and on the whole, I think patients in the NHS have a much, much better experience than this poor kid has had."

Conservative strategists are looking to consolidate gains they consider the party to be making in Labour-held seats.

Gains outside the party's heartlands are needed to overcome the defection of voters who want to remain in the EU.

The poll-tracking service Britain Elects put the Conservatives on 42.9 per cent on Monday, while Labour was on 33 per cent.

It said that Labour catch-up with the government appeared to have stalled.

Election analysts said the Labour Party's strategy of pouring resources into the seats of senior well-known Conservatives, including Mr Johnson, appeared to have backfired.

Lewis Baston, a polling expert, said the drive to oust Mr Johnson was a long shot that would overturn "everything in the data" that had emerged so far.

"It's a flytrap for opposition activists,” he said. “There’s always this temptation to decapitate the leader of the other side and it very rarely works.”

Labour focused on its economic plans on Monday and pledged to nationalise the water and electric supply networks within 100 days of seizing power.

An appearance by John McDonnell, the party's finance spokesman, on the airwaves with businessman John Caudwell turned into a bruising exchange about a purge of the country's wealth creators if Labour won power.

“When I hear phrases like, ‘Nobody deserves to be a billionaire’, it frightens the living daylights out of me,” Mr Caudwell said.

“What you are doing as a Labour Party is destroying confidence. Nearly every wealthy person I know is thinking of leaving the UK, including me, if Labour get in.”

These were the details of the news Boris Johnson forced on to defensive by 'sick boy' photo on last campaign dash for this day. We hope that we have succeeded by giving you the full details and information. To follow all our news, you can subscribe to the alerts system or to one of our different systems to provide you with all that is new.