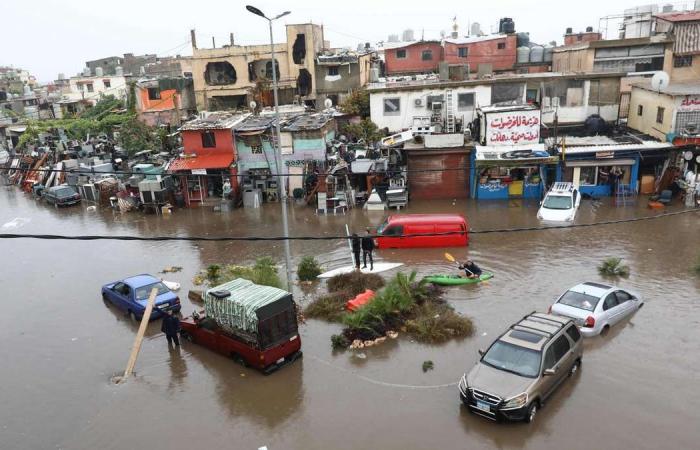 Hind Al Soulia - Riyadh - Flooding in Lebanon triggered fresh anger against the government on Monday, nearly two months after protests erupted against decades of mismanagement by the ruling elite.

“Lebanon is drowning” was trending on Twitter after heavy rain hit the small Mediterranean country on Sunday.

Videos and photos of flooded roads and leaking government offices were widely shared on social media as more examples of politicians' failure to provide decent infrastructure to the Lebanese since the end of the civil war in 1990.

“Welcome to the Beirut-Rafic Hariri International Airport: a fitting legacy for Hariri besides the toilets," tweeted Lebanese journalist Lara Bitar under a video of passengers dodging water dripping from the ceiling as they pulled their luggage behind them.

The state-run National News Agency reported that water seeped into several offices at the airport as well as the arrival and departure halls. Roads around the airport were flooded, causing massive traffic jams.

Another video, said to be showing people wading through water in a corridor of a Labour Ministry building, went viral on Twitter.

Men kayaking along roads in the southern suburbs of Beirut were also caught on camera, leading many people to jokingly compare the Lebanese capital to the Italian city of Venice.

“This political class has turned Beirut into the Venice of the Middle East”, tweeted Lebanese satirist Karl Sharro.

Perhaps the most widely commented video showed dozens of submerged cars on a highway in Ouzai, a suburb in South Beirut.

“The water entered shops and homes” in the area, NNA reported.

In a tunnel nearby, drivers had to abandon their cars to escape the rising water on foot.

Roads in the southern suburbs were re-opened by Monday afternoon.

In a press conference, caretaker Minister of Public Works Youssef Fenianos blamed MEAS, a private company affiliated to the national carrier Middle East Airlines, for the flooding in Ouzai tunnel.

Quoted by the NNA, Mr Fenianos said he “understood the suffering of the people … but there are difficulties in disbursing the credits due to the financial crisis that the country is going through”.

In Lebanon’s mountains, the rain turned into snow, closing a major highway in the remote region of Hermel.

These were the details of the news Lebanon floods increase anti-government anger for this day. We hope that we have succeeded by giving you the full details and information. To follow all our news, you can subscribe to the alerts system or to one of our different systems to provide you with all that is new.