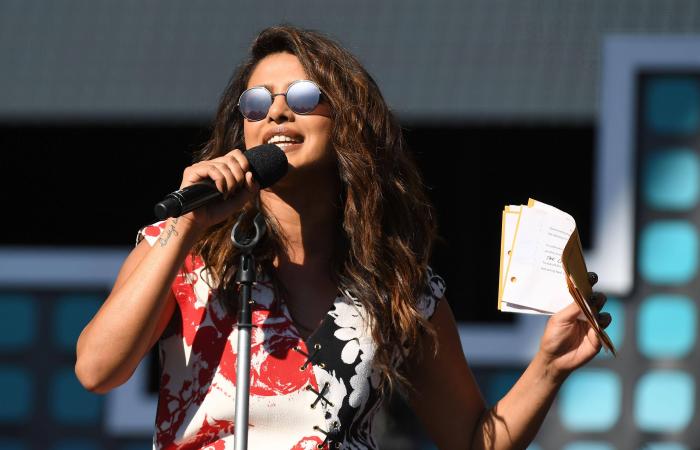 Thank you for reading the news about Indian film celebs applaud Biden, Harris and now with the details

Hailing Biden and holding up Harris' achievement as a shining example, Priyanka Chopra encouraged all girls to dream big.

She wrote on Instagram, "America spoke in record breaking numbers and the verdict is in... EVERY VOTE counts. I applaud everyone who voted in what was such a powerful display of how a democracy should function. It was amazing to witness this election in the US. Congrats to the President Elect @joebiden and Vice President elect @kamalaharris, the first woman VP! Dream Big girls! Anything can happen"

Her post was accompanied by heart emojis and tagged #DemocracyRocks. She ended the note with the words: "Congratulations America."

Abhay Deol posted a funny Instagram meme that depicts Statue of Liberty taking aim to toss Donald Trump away with a slingshot. "Yup. It happened!" he captioned the image.

Actress Kajal Aggarwal, who got married to entrepreneur Gautam Kitchlu on October 30, wrote on Twitter: "Congratulations to @KamalaHarris for becoming the first female and first South Asian Vice President elect. Such an inspiration."

Filmmaker Anubhav Sinha had a witty quip. "Mark my words this will be the first American President to be escorted out of office," he commented.

"Congratulations on a new dawn...and the might of the common man who willed it," Nimrat Kaur wrote.

Filmmaker-actor Kunal Kohli lauded the winds of change in the US in his tweet. "Well done America. One day we will also celebrate like this. Apna time ayega," he wrote.

These were the details of the news Bollywood News - Indian film celebs applaud Biden, Harris for this day. We hope that we have succeeded by giving you the full details and information. To follow all our news, you can subscribe to the alerts system or to one of our different systems to provide you with all that is new.