The Met’s ‘About Time’ exhibition shows that fashion is never entirely... 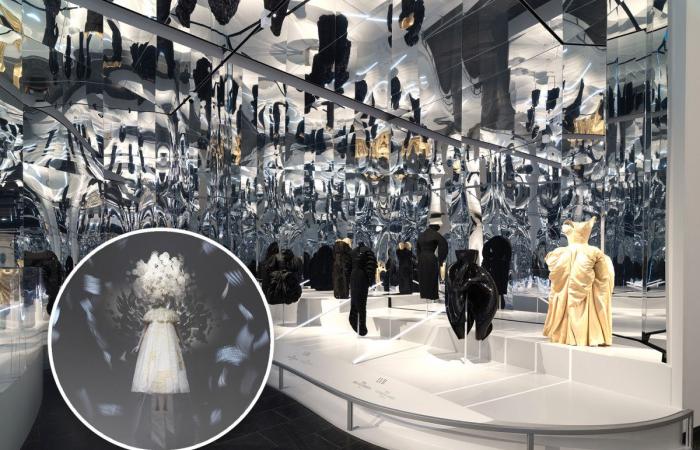 Finally! The Metropolitan Museum of Art opened its newest exhibition at the Costume Institute on Thursday after several delays – and a canceled gala – due to COVID-19. And it’s only fitting, because the exhibition is all about. . . Time.

“About Time: Fashion and Duration” celebrates the 150th anniversary of the Met. The exhibition reflects 150 years of fashion and comes largely from the Costume Institute’s own archive. Instead of a simple timeline showing the progress of trends and silhouettes, “About Time” takes a more versatile approach and shows how fashion – like history – repeats itself over and over again.

“Essentially, the show is a meditation on fashion and temporality,” said curator Andrew Bolton in a press release earlier this week, “to work out the tensions between change and perseverance.” [as well as] Transience and persistence. ”

The show is in chronological order, beginning with a busy “mourning gown” from 1870 and ending with a silky red dress by designer Sarah Burton by Alexander McQueen from 2019. A second, parallel timeline runs throughout the show, juxtaposing these looks Timeline with similar creations from a completely different time. Bolton selected 120 mostly black ensembles “to emphasize their changing silhouettes and connections”.

On the one hand, the exhibition is a testament to the old adage “great artists steal” and shows that even the most iconic, cross-border items of clothing (from Jean Paul Gaultier’s tapered bra for Madonna to Gianni Versace’s Va-Va-Voom safety pin dress) had come from get more ancient types inspired. But it also shows that pretty much every fad is ripe for resurrection. It’s not just the timeless artifacts that are recycled over and over again – the little black dress, the tuxedo jacket, the tweed skirt suit – but also the most exaggerated, ridiculous, and outdated: bulging tubercles, narrowing corsets, padded hips, a World War I Red Cross uniform from the I- Era, copied by designer John Galliano in.. . 2020?

Well why not? As Bolton said, “Time exists as a continuous flow.”

Here’s a look at some of the exhibition’s most iconic styles and how they reproduce to this day.

About Time runs through February 7, 2021. Admission to the exhibit requires timed tickets, available on MetMuseum.org or on-site for members and residents of New York State.

Elizabeth Hurley caused a stir when she arrived in 1994 at the premiere of the film “Four Weddings and a Funeral” in this eye-catching sheath with skin-friendly slits held together by oversized safety pins. However, Versace wasn’t the only designer who combined hardware, exposed skin, and high fashion. In 1977, the British designer Zandra Rhodes made her debut with her torn “punk wedding dress”, which was adorned with beaded safety pins and ball chain fringes. And in 1884 a young celebrity named Virginie Gautreau scandalized all of Paris when her portrait – painted by John Singer Sargent – debuted, showing her in a revealing sweetheart neckline and jeweled shoulder straps black dress that bears more than one notable resemblance to Hurley’s equally shocking gown.

Coco Chanel created “timeless” fashion, which is why it is still being copied almost a century after her “little black dress”. Take her signature wool suit, which launched in 1954 and consists of a box-shaped cardigan and a straight skirt. No less than Jacqueline Kennedy wore a fake – the infamous bubble gum pink suit she wore when her husband was murdered in 1963. (Though Jackies came from a real Chanel pattern.) When Karl Lagerfeld took over the famous Chanel house in 1982, he immediately shortened the hem of the suit to micro-proportions. Other designers have given the classic a postmodern twist by rendering it in garish McDonald’s colors (a la Jeremy Scott) or shredding and turning it upside down (a la Junya Watanabe). The current muse Kristen Stewart has worn an endless number of variations herself, including this one made of light pink satin, which she styled without a shirt underneath – how brave!

Sometimes it’s the least practical things that keep coming in vogue. Take the ornate vests and “riding jackets” of France of the late 17th and early 18th centuries, stiffly embroidered with flowers and worn with lace frilled collars. Queen Alexandra, wife of King Edward VII, was photographed by Morin Blossier in 1902 wearing this decorative silk velvet riding jacket with puff sleeves. In 2003, Italian designer Roberto Cavalli made an Edwardian frock coat from jeans with cut-offs, and in 2018 Louis Vuitton director Nicolas Ghesquière showed a range of jacquard-woven silk jackets and vests, as well as sporty shorts and trainers – directly inspired by the historical garments from the Met collection.

Believe it or not, Madonna’s signature tapered bra, which she wore for her ‘Blond Ambition’ tour in 1990, wasn’t overly original. The bra’s creator, Jean Paul Gaultier, had presented an even more exaggerated version of the silhouette in his fall runway collection from 1984. Punk provocateur Vivienne Westwood debuted in the early 1980s with a similar, more low-key version of the high-fashion cone bra. And in 1949 the American couturier Charles James – known for his elegant ball gowns – made his debut with his “tulip” dress with a conical bust, which looks almost exactly like Gaultier’s later cross-border creation.

These were the details of the news The Met’s ‘About Time’ exhibition shows that fashion is never entirely... for this day. We hope that we have succeeded by giving you the full details and information. To follow all our news, you can subscribe to the alerts system or to one of our different systems to provide you with all that is new.