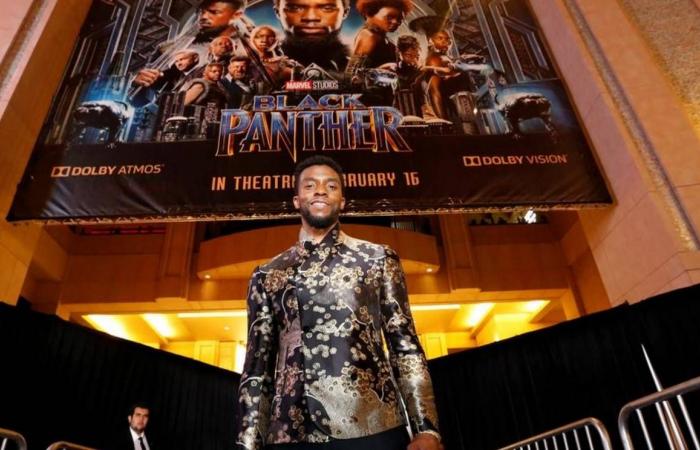 Thank you for reading the news about Shock, grief, and gratitude after death of Chadwick Boseman and now with the details

Aden - Yasmine El Tohamy - Mark Ruffalo, Jordan Peele, Joe Biden and Marvel Studios were among many expressing shock, grief and gratitude in the wake of the loss of Chadwick Boseman, who died Friday at age 43.

Boseman died at his home in the Los Angeles area with his wife and family by his side, his publicist Nicki Fioravante told The Associated Press. Boseman was diagnosed with colon cancer four years ago, his family said in a statement.

"What a man, and what an immense talent. Brother, you were one of the all time greats and your greatness was only beginning. Lord love ya. Rest in power, King." - Mark Ruffalo, Boseman's co-star in "Avengers: Infinity War" and "Avengers: Endgame," via Twitter.

"This is a crushing blow." - director and actor Jordan Peele on Twitter.

"I don't have words. Rest In Peace, Bruh. Thank you for all you did while you were here. Thank you for being a friend. You are loved. You will be missed." - Boseman's "Black Panther" co-star Sterling K. Brown.

"Our hearts are broken and our thoughts are with Chadwick Boseman's family. Your legacy will live on forever." - Marvel Studios, via Twitter.

"Heartbroken. My friend and fellow Bison Chadwick Boseman was brilliant, kind, learned, and humble. He left too early but his life made a difference." - Kamala Harris, on Twitter. Harris and Boseman were both graduates of Howard University, and his final tweet celebrated her selection as Joe Biden's running mate.

"The true power of (at)ChadwickBoseman was bigger than anything we saw on screen. From the Black Panther to Jackie Robinson, he inspired generations and showed them they can be anything they want - even super heroes." - Joe Biden, via Twitter.

"We are devastated by the tragic loss of Chadwick Boseman. His transcendent performance in '42' will stand the test of time and serve as a powerful vehicle to tell Jackie's story to audiences for generations to come." - Major League Baseball, via Twitter.

"This broke me." - Actor and writer Issa Rae on Twitter.

"A warrior of light til the very end. A true king. I am without words. May he rise in power." - Actor Kerry Washington, on Twitter.

"Just when you thought 2020 couldn't get any worse... A deeply gifted man is gone too soon. His memory will blaze on fiercely... from here to eternity." - Mark Hamill, on Twitter.

"Hard to hear about this. Rest in love, brother. Thank you for shining your light and sharing your talent with the world. My love and strength to your family." - Dwayne Johnson, via Twitter.

"We love you, Chadwick. Your legacy will never die." - Lena Waithe, on Twitter.

"An immeasurable loss. From "Black Panther" to "Da 5 Bloods," Chadwick Boseman brought strength and light to the screen, every time." - The Academy of Motion Picture Arts and Sciences, via Twitter.

"i will miss you, birthday brother. you were always light and love to me. my god." Don Cheadle, via Twitter.

"So stunned. Honored to have worked with (at)chadwickboseman early on. Truly an amazing man. God bless his wife and family in this difficult time. Rest In Peace, brother." - Terry Crews, via Twitter.

"We've lost a great one. My heart is truly broken." - Octavia Spencer on Instagram.

These were the details of the news Bollywood News - Shock, grief, and gratitude after death of Chadwick Boseman for this day. We hope that we have succeeded by giving you the full details and information. To follow all our news, you can subscribe to the alerts system or to one of our different systems to provide you with all that is new.