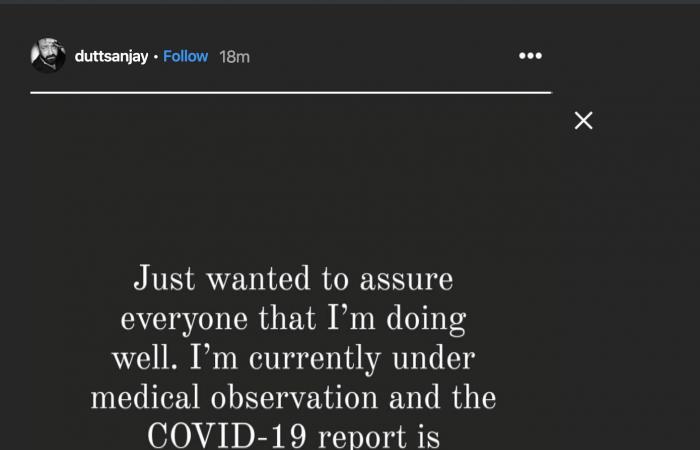 Aden - Yasmine El Tohamy - The medical team attending to the actor at the hospital has informed that Dutt has tested Covid-19 negative after the test.

Bollywood actor Sanjay Dutt was hospitalised on Saturday, August 8, evening after he complained of breathlessness and uneasiness in the chest.

The medical team attending to the actor at Mumbai's Lilavati Hospital has informed that Dutt has tested Covid-19 negative after a rapid antigen test, although he continues to be kept under observation in the intensive care unit (ICU). His condition is said to be stable.

"Just wanted to assure everyone that I'm doing well. I'm currently under medical observation & my COVID-19 report is negative. With the help & care of the doctors, nurses & staff at Lilavati hospital, I should be home in a day or two. Thank you for your well wishes & blessings," the actor tweeted with an emoji of folded hands, on his official Twitter account, @duttsanjay.

Dutt, who turned 61 on July 29, suffered from low oxygen saturation levels according to a report in indianexpress.com. On arrival at the hospital, he underwent a rapid antigen Covid-19 test and the result was negative. However, the hospital authorities have also collected a swab of the actor for an RT-PCR test.

The actor returns to the screen in Mahesh Bhatt's "Sadak 2". The sequel to the 1991 hit, "Sadak", reunites Dutt with Pooja Bhatt, and also casts Alia Bhatt and Aditya Roy Kapur in pivotal roles. The film is slated to release digitally on August 28.

These were the details of the news Bollywood News - Bollywood actor Sanjay Dutt hospitalised for this day. We hope that we have succeeded by giving you the full details and information. To follow all our news, you can subscribe to the alerts system or to one of our different systems to provide you with all that is new.