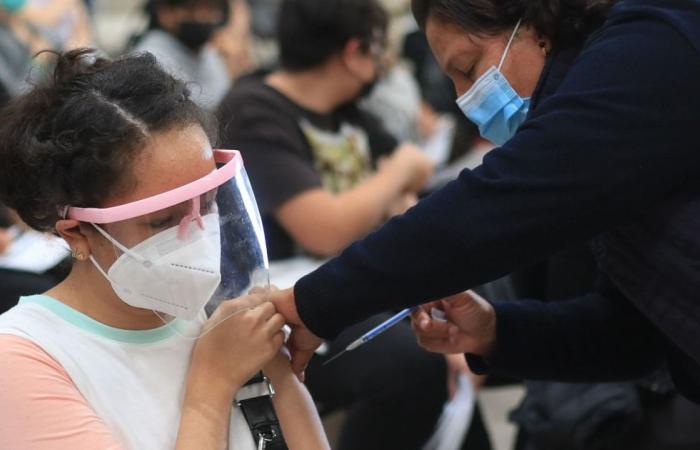 The American health authorities announced the approval of two drugs to treat the Corona virus (Covid-19), while Britain recorded a record number of HIV infections, and several countries decided to re-tighten the precautionary measures to confront it.

Today, Thursday, the US Food and Drug Administration (FDA) authorized the emergency use of an anti-Covid-19 drug in adults at high risk, produced by the Merck laboratory, a day after allowing the use of a similar pill developed by Pfizer.

“Today’s authorization to use this treatment adds a new treatment against Covid-19 in the form of an oral pill,” said Patricia Cavazoni, an official at the FDA.

This drug can be taken in the five days following the onset of symptoms of infection, and it reduces the risk of hospitalization and death by 30% for those in poor health.

Yesterday, Wednesday, the FDA approved a similar treatment from Pfizer marketed as “Paxlovid”, and it reduces the same risks by 90%, according to preliminary studies.

Pfizer medication consists of two tablets taken twice a day for 5 days, and this medication can be given to patients who are prone to serious forms of the disease and over the age of 12 years.

As for Merck’s treatment, molnupiravir, it consists of 8 doses per day for 5 days, and it works by interfering with the virus’s genome to cause mutations that limit its reproduction.

And the US Food and Drug Administration stressed – in its statement – that these two treatments are a complement to the vaccine, which remains the main tool in the fight against the Covid-19 pandemic.

While clinical trials have not revealed any significant risks to patients with the two drugs, Merck’s drug has been a concern.

The FDA has not approved Merck’s drug for children under the age of 18 because it may affect bone and cartilage growth.

It is also not recommended for pregnant women due to the potential risks to the fetus, but doctors can recommend it if the benefits outweigh the risks.

Britain is witnessing an unprecedented rise in the number of infections with the Corona virus, as the British Health Security Agency announced today new data regarding the severity of the disease caused by the mutated Omicron.

And government data indicated that the number of new deaths within 28 days of testing positive for infection reached 147, up from 140 deaths yesterday, Wednesday.

Scientists fear that the rapid spread of Omicron will put enormous pressure on hospitals, but two separate studies by scientists from the University of Edinburgh and Imperial College London showed that Omicron is less severe than the delta mutant, and that people with Omicron need less hospital treatment.

In France, Remy Salmon, head of the health committee in Paris hospitals, called for additional health measures to be taken with the start of Christmas celebrations, and 84,000 new injuries were recorded during the past 24 hours.

Remy explained that the Delta mutant is still the most prevalent in France, although the Omicron mutant has begun to spread very quickly.

For his part, French President Emmanuel Macron posted a tweet on his Twitter account, calling on his citizens to respect health restrictions and social distancing measures during the Christmas period.

Not far from France, today, Thursday, the Spanish government ratified a decree requiring a return to the use of masks in open spaces, in addition to strengthening vaccination units in hospitals with teams of the armed forces, and placing some hospitals in the military health network at the disposal of the public health system.

The Spanish Prime Minister refused to impose new precautionary measures despite the high number of injuries, justifying this decision by the low death rate after nearly 90% of Spaniards received vaccination.

In turn, the Moroccan government decided to extend the validity period of the state of health emergency in the country for an additional month until the end of next January, to ensure the effectiveness and efficacy of the measures taken to prevent the spread of the virus.

For its part, the Lebanese Ministry of Tourism said in a statement that it had issued orders requiring restaurants, hotels, fitness centers and entertainment venues to require visitors to provide a certificate of vaccination against Covid-19 or a negative screening test before entering.

The ministry added that these places must implement the new rules until January 9.

In Germany, the Robert Koch Institute for Infectious Diseases confirmed the first death in the country today as a result of infection with the Omicron strain.

And 810 Omicron infections were recorded in Germany, bringing the total number of infections with the rapidly spreading mutant to 3,198 cases.

High in the Gulf

In the same context, the data of the ministries of health showed today, Thursday, that infections with the Corona virus began to increase again throughout the six Arab Gulf countries, after months in which they decreased or remained at a low level, with the spread of the mutant Omicron around the world.

The six Gulf countries have detected Omicron infections in their territories, although daily infection figures do not separate the infected according to the virus strain.

And Saudi Arabia (the largest Gulf country in terms of population) recorded 252 new injuries today, an increase from the total daily injuries estimated at 50 since late last September.

The Sultanate of Oman, Qatar and Bahrain are also witnessing an increase in the number of injuries, albeit less severe, and Kuwait recorded, yesterday, Wednesday, 143 new injuries, and this is the highest daily number in it since late last August.

Leap in deaths in Russia

In Russia, statistics published by Reuters, based on official data, showed that deaths due to the Corona virus exceeded the 600 thousand cases today, Thursday, after a jump in the number of infections related to the Delta strain.

Russia records the third highest death toll in the world due to Corona, with the number of deaths reaching 600 thousand and 434 cases, after the United States, which recorded 813,000, and Brazil with 618,000 deaths.

Yesterday, the United Kingdom recorded for the first time more than 100,000 infections with the Corona virus within 24 hours, amid the outbreak of the mutated Omicron that may prompt new restrictions after Christmas.

The total death toll in the country, which is considered one of the most affected by the epidemic, has reached 147,573 since the start of the health crisis, with 140 deaths recorded during the last 24 hours.

More than 11.6 million people have been infected with the epidemic since the virus appeared in Britain in early 2020, including 106 thousand and 122 who were infected yesterday, Wednesday.

Injuries at the Pentagon

On the other hand, the US Department of Defense (Pentagon) said today, Thursday, that tests showed that 7 of its employees had contracted Covid-19, after they visited several bases last week, including the Indian and Pacific Ocean Command in Hawaii.

Department spokesman John Kirby said in a statement that the team – which included civilians and military personnel – went to bases in Michigan, Colorado, Hawaii, California and Nebraska, as part of a visit by Kathleen Hicks, Deputy Secretary of Defense to US bases and leaders, but Hicks herself came as a result of her negative examination.

In turn, the Chinese authorities imposed quarantine measures yesterday, Wednesday, in the city of Xi’an in the north of the country, which has a population of 13 million people, due to the high number of infections with the Corona virus.

And the local authorities said in a statement that the city’s residents “should stay in their homes unless there is a compelling reason” to leave, explaining that one person per family is allowed to go out shopping “every two days”.

These were the details of the news Corona .. two new drugs in America, record injuries in Britain... for this day. We hope that we have succeeded by giving you the full details and information. To follow all our news, you can subscribe to the alerts system or to one of our different systems to provide you with all that is new.