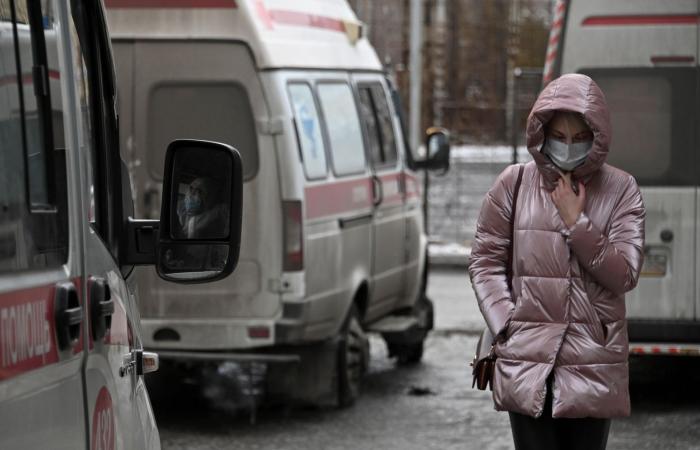 The number of daily infections with the emerging coronavirus for the first time since the beginning of the pandemic has crossed the 37,000 threshold, with a new unprecedented jump in the number of deaths due to the epidemic.

Today, Friday, the Operations Room for Combating the Coronavirus in Russia announced that it had recorded 37,141 new infections during the past 24 hours, compared to 36,339 infections yesterday (which was also an unprecedented increase in the outcome).

The largest number of new infections is distributed between the capital, Moscow (8166 cases), the second largest city in the country, Saint Petersburg (3,233 cases) and the Moscow region (2428 cases).

The death toll from Corona in the country witnessed an unprecedented increase for the fourth consecutive day, with 1,064 new deaths resulting from the epidemic during the last 24 hours, compared to 1036 deaths yesterday, Thursday, 1028 deaths on Wednesday, and 1015 deaths on Tuesday.

And 25,453 patients in Russia have recovered since yesterday from the “Covid-19” disease caused by Corona.

In total, since the beginning of the pandemic, eight million and 168305 confirmed cases of corona have been recorded in the country, including 228,453 deaths and seven million and 117,060 cases of recovery.

To date, 203.4 million laboratory tests have been conducted in Russia to diagnose infections with “Covid-19”, 680,000 of them during the last 24 hours.

To date, more than 53.5 million people in Russia have received the first dose of the coronavirus vaccine, and more than 49.1 million of them have completed their vaccination by receiving the second dose, and the level of social immunity in the country is estimated at 45.7%.

On Wednesday, Russian President Vladimir Putin announced a new package of measures aimed at curbing the spread of Corona in the country, foremost of which is the imposition of an official paid holiday that extends from October 30 to November 7.

These were the details of the news Russia.. Daily injuries to corona exceed 37,000 for the first time... for this day. We hope that we have succeeded by giving you the full details and information. To follow all our news, you can subscribe to the alerts system or to one of our different systems to provide you with all that is new.